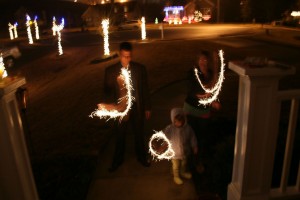 Last year at this time, I picked a favorite post from each month and gave myself props.  This year, I’ll just summarize some highlights, since my blogging was sporadic anyway, and some months had multiple incidences of greatness, while other months had none (like that piggy with the roast beef).

In January, I modeled my least favorite Christmas gift in “My Snuggie.”  Every day, I get blog traffic because of this post.  Because you people are sick and twisted.

A couple weeks later, Pretty Bride’s nine-year-old car broke down, and we replaced it with our family’s first minivan. I felt castrated and called the post, “As of 8pm on January 24, I’m hung like a ‘Ken’ doll.”

In February, I announced to the internet that I was about to quit my job to start my own firm in “Standing on a Suspended Bridge, Holding a Sword Above the Rope that Keeps Us Suspended.”

On April 3, I left my secure office and said “Farewell” to the Turd Burglar in “It is Finished.”

In mid-May, I flew down to Orlando for a conference and met–for the first time–people I’d only known from blogging.  I had dinner with Avitable and Miss Britt in “Muskrat to Meet Bloggers, Take 5.”

In June, I listed some noteworthy moments with Maddie in “On Father’s Day.”

In an attempt to reclaim some of my pre-family-of-my-own spontaneity, I went to BlogHer in July.  I found event tickets and lodging via Twitter less than a week before the conference.  The description of the experience itself is here:  “Jet-Setter Muskrat, or, How I Learned to Stop Worrying and Love the Mommy Blogger.”

In August, I went to Las Vegas and spent time with Nancy from Fear and Parenting in Las Vegas and the notorious BHJ.  Recaps are at “Son, Your Government’s Writing Checks the Muskrat Just Cashed” and “A Glimpse into the Life of a Dark, Slapshotting Deity.”

Also in August, I opined that our infant was ingesting weed in “My 10-month-old Totally Loves the Indo,” and I offended a bunch of people with “Social Media is for Losing Friends and Offending People.”

I crossed Maine of my “states to visit one day” list in “The Maine Event” and wrote an uncharacteristically emotional recount of my September 11, 2001 experience in “Again.”

I used the 7-month point to update the internet on how my new firm was doing in “Pay Attention to the Man Behind the Curtain.”  This seemed to encourage people.

Then we accidentally got pregnant–right after we’d both decided we weren’t going to have more children–in “Things of Which I Am Not a Fan:  God’s Use of Irony.”

2009 was the year I wanted to go by quickly.  Several times in March and April, I said, out loud, that I wished we could jump ahead to January 2010, so that I wouldn’t have to go through the hard months of living off savings and worrying about building a successful firm during a horrible economy.  I even had a $400/hr legal marketing consultant tell me I shouldn’t go out on my own this year–that I needed more money and transferable business–but I’d already made up my mind, so I did it anyway.  And even if I’d failed, I’m glad I took the risk to pursue work that means something to me.  I’ll be 40 in June 2015.  I don’t want to turn 40 and wish I’d had some balls when I was younger.

In any event, thanks for your help, Blogosphere.  What blogging has taught me about social media helped immensely in my low cost marketing strategy (as I can do for < $100/month what some attorneys I know pay consultants $5,000/month to do).

Thanks for the encouragement and needed diversion you’ve provided at just the right times, and I can’t wait for more trips, conferences, meetups, and Davelantas in 2010!