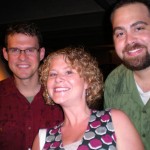 The first time I tried to meet a friend I made through blogging was in 2007 when I was writing from Iraq and befriended a doctor who was writing from the same location, shortly after he gave me a “shout out” following his getting a New York Times link to his blog, sending me several hundred new visitors.  However, he flew home before we could coordinate our schedules, and it never happened.

The second time I tried to meet bloggers whom I knew online was when I flew to Wisconsin for work and hoped to meet Maggie Dammit and Sarah Pare.  Maggie told me she lived in the “boonies” and couldn’t come to Madison, and Sarah failed to respond to my intoxicated twitters asking her and hers to come out to the Great Dane (oddly enough).

The third time I looked forward to meeting a blogger I liked was when Tanis was in Nashville, the city in which I grew up, for Blissdom.  But, I had a trial that week and National Guard that weekend, so I recommended a good BBQ joint for her to visit in lieu of meeting.

The fourth time I tried to meet a blogging friend was when Pretty Bride had a booth at the Inman Park festival, and Kristen said she’d come by to say “hi.”  She came to the festival but never quite made it by our booth, due to a meltdown by some or all of her three children.

So, I was a little pessimistic about my fifth attempt, in which I’d hoped to take advantage of what has so far been a horrendously dull and rainy military-sponsored conference in Orlando by meeting Avitable and Miss Britt.

Shame on me for my pessimism.  Despite the El Yunque conditions tonight, they showed up, wet but cheerful at a cantina a few blocks from my hotel.  And let me clear up a few misconceptions you may have if you only know these people from their blogs:

1-Adam is not a dick.  He’s like Hagrid, but without the adoring little wizards.  Sardonic wit, yes, but never mean or belittling.  He insisted on picking up the tab and even drove me back, so I wouldn’t have to stand in the rain hailing a cab again.

In any event, thanks for sparing me from another evening alone at a bar this week, you two!  I hope to hang out again at the infamous Avitable Halloween party in a few months.