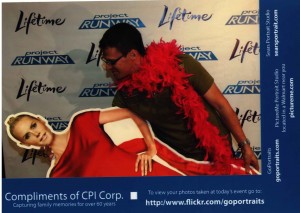 I decided I wanted to go to BlogHer last week, because the cool kids I already knew were going, and I wanted to meet a couple people whose words I liked, and one person from my hometown I’d been trying to meet for months, and I figured I could write it off, now that I’m self-employed, if I attended an SEO class.

So, I called on Delta skymiles and Twitter to make it happen.  Shit works, too, ’cause within a few hours, I had a lobby pass, then a “full access” pass, and then lodging with two wonderfully kind and patient folks whom I only knew online.  All the while, there was a large-mongous wait list for the tickets I was able to find in a few hours by asking online.  As soon as my firm turns a profit, I’m buying the internet a white house with a walk-in closet.

Within seconds of stepping into the hotel, Adam texted me about lunch with Neil and him.  At the table next to him, I finally met Kristen, who took this picture: 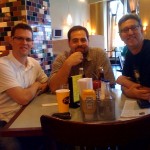 That night was the SocialLuxe Kick-off Party.  On the way, I passed a line of well-dressed folks going to a party to meet the President, so, that was something.  I met Sarah, who redesigned my blog.  I made plans to meet Chicagoan Literal Dan.

Then I saw a tall, lanky dude with a beard whom I thought could be Black Hockey Jesus:

Me:  Jon?
BHJ:  Yes?
Me (reaching out with right hand) I am the Muskrat.
BHJ:  I thought you’d be taller.
Me:  Why is that?
BHJ:  Because you threatened to kick my ass when I made fun of Elvis.
Me:  Yeah, well…
BHJ:  You know what Jenna said when I told her I was going to meet you?
Me:  No.  What?
BHJ:  She said, “You mean the guy who can’t let Vincent go?”
Me:  *laughing my ass off* I guess I do mention him in just about every comment I drop on your blog.
BHJ:  What’s up with your blog?  You never write any more. 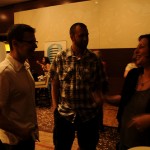 We ran over there and gave her a hug.  I could’ve left right then and been content with my weekend.

I met Maggie’s friend, Amy, and others.  I saw a standing-by-herself Jenny and introduced myself as “the guy who drops profane comments on your blog under the name ‘Muskrat’.”  I talked to the Mama Pop writers.

I saw Bossy and greeted her with, “Remember that dumbass who asked if your road trip would include Atlanta, about a year after you’d already taken the trip and returned?  That was me.”

At some point, I went into the ladies’ room with Her Bad Mother, The Bloggess, and BHJ: 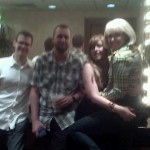 I have no explanation for this behavior.

Next was the People’s Party.  I finally met Dan and his wife after texting for a few hours and never finding each other (he has got to get on Twitter already).  Tanis explained blogging to my highschool friend, Monica, who works at the Chicago Public Defender’s office and has no interest in blogging whatsoever.  But we tried.

The conference the next day was great, as was lunch at Giordano‘s with some folks who were Facebook friends I’d never met, and others.  We heard some great blog posts read aloud at the keynote session, including “5” by BHJ, which resonated with me a little more than I would have publicly wanted at the time:

That night was the BlogHer cocktail party where I performed karaoke captured on You Tube.  I’d met the Coal Miner’s Granddaughter earlier that day, and she was “kind” enough to record it.  Then it was to the House of Blues for EA Sports‘ event followed by several hours of dancing at MamaPop: 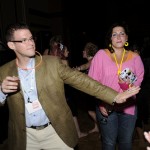 There are also pictures with Maria, but you’ll have to catch them at her blog.

Judging by my tweets, I stayed up til 4.  I know I was talking to some folks from the Pacific time zone.  Getting up for breakfast around 7 was not the best feeling I’d ever had, but sleeping in is for neutered dogs, and I am no neutered dog.

The next day had some more great sessions, including the male bloggers one led by Adam, Jim, and Matt.  I met humor-blog friends Kathy, JD, Margaret, and Meg.  Meg thought I should be taller, too.

That night was another cocktail party, BowlHer with Amy, and the CheeseburgHer party with Tina, CalifMom, and others before spending all night in the hotel bar or lobby and watching the sun start up over Lake Michigan and the Chicago River.  I think Lex, ZoeyJane, Avitable, Britt, Weasel Mama, and some of the other aforementioned were there.  Jimmy Hoffa and Carmen Sandiego may have been with us, too.

I remember setting down a doll another blogger had given me for my daughter, so that I could run into the restroom for 2 minutes, and it was stolen from underneath my stack of pictures.  That pissed me off big-time was a little frustrating, but good people like Tina and Deb helped send out distressed calls for its relocation (that, unfortunately, failed).

Rode back via a cab with Tracey and flew home with Carolyn, whom I was able to convince to get on Twitter!  I love making a difference in the lives of others.

I got home and waited on the little ones to get up from their naps, which was a lot like staring at the clock on December 25th at 4am as a 10-year-old boy.

By Monday, I was already missing Britt and Adam.  I went online to see what would be involved with taking the Florida bar and moving to Orlando.  Fuck that; we can just read each other’s blogs.

I’m glad I went, although I did get tired of explaining why I’m not as tall as everyone expected.

Would I go back?  I’d love to–and NYC is probably my favorite city to visit in America–but I’ll likely bring Pretty Bride if I do, since I came home to concerned DM’s letting me know of rumored speculation that my late nights had untoward motivations.

Which is why when I go out in Atlanta, I almost always stick to gay bars.  I can be as boisterous and pretty as I want at Mary’s, and nobody whispers about it.  They just come up and ask to touch my balls.

I’ve already received an invitation to be roomies from Kathy, which might work great, since she seems to get up when I’m getting in.

If I have any readers who didn’t go and are on the fence, I highly recommend you take the opportunity to meet folks whom you enjoy online in “real life.”  It’s wonderful.  And as Morrissey taught us:  shyness can stop you from doing all the things in life you want to.  Don’t be stopped.