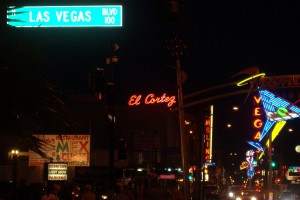 In a surprising move indicative of fiscal irresponsibility last week, the National Guard sent me to Las Vegas for a conference.  I’d never been to Vegas before, but I met a couple bloggers at BlogHer who expressed a willingness to show me around, so I took them up on it.

I met Nancy from Fear & Parenting in Las Vegas at the Triple George Grill in downtown Vegas.  We agreed to stay out til midnight, since it was a weeknight. 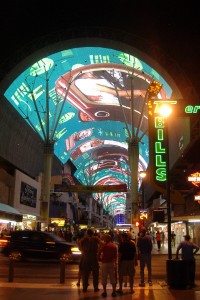 We saw a giant screen.  And some bar that used to be a beauty salon.  And some other bar that looked like a dungeon.  And the Bellagio.  And a bunch of traffic.  And New York, New York.  Which had a roller coaster.  That we foolishly decided to ride.

There were signs everywhere telling riders to use the lockers for change, cameras, phones, etc., so that said items don’t come hurling down at 32 feet-per-second-squared at the pedestrians down below when the ride goes upside-down.  I had my cellphone in my hand, and the operator made me shove it in a locker just as we were about to board the ride.  I was pissed. 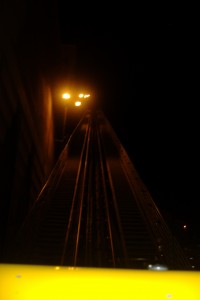 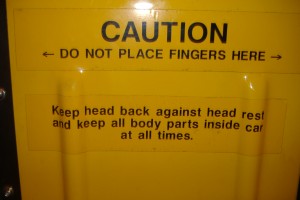 So, I shoved my camera in my crotch and plopped down into my seat on the ride.  And then I pulled it out and started snapping away.  But I couldn’t stop with just two… 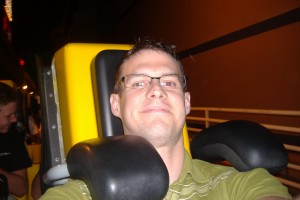 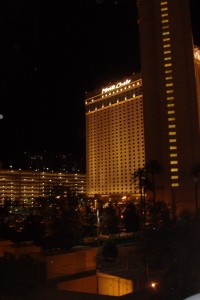 I had to keep on taking pictures as we began our ascent.  Only, we didn’t ascend.  The ride stopped.  Its operator came sprinting toward the front of the roller coaster and glared at me–the same one who’d refused to let me board with my phone just a few seconds earlier.  I could feel the seething from all who’d waited in line for 45 minutes, only to have some jackass from Georgia prevent their riding the roller coaster once they’d finally started.  I had to hand over the camera.

I complied.  Next, I decided to give $80 to a nice old blackjack dealer who looked a lot like Uncle Fester.  That made for an exciting 12 minutes.  At least Nancy let me play with her winnings for a while, until they too disappeared.  I took a picture of the ceiling, which looked like Dale Chihuly had thrown up.  But it was a pretty throw up. 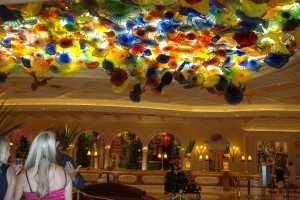 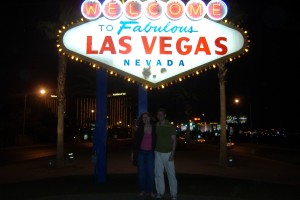 I got home around 3.  I woke up with red hand prints across my right cheek from smacking myself to stay awake on the drive back.  At least, that’s what I’m telling myself.

The next day, I went back to Notorious BHJ’s crib.  As soon as I walked in, he told his daughter, “Now watch what you say around this guy, because he’s probably going to write it all down and publish it on the internet.”

We went to Red Rock Canyon for some hiking. 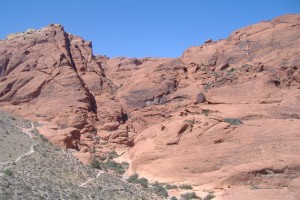 I recognized a couple “Wordless Wednesday” backdrops from old blog entries.  We saw a large snake.  We communed with nature.

We returned to their home, waited on the Mrs to return from work, dropped off the youngsters, and had Sushi Love.  He even got to have his faded, through-the-wash card stamped.  We plowed through, like, 16 rolls.

Then, according to Twitter, I did the following:
-counted cards like Rain Man.
-called Criss Angel a “degenerate Yankee” and started a knife fight.
-flipped over a table at the Bellagio buffet and insulted the Queen of England.
-beat up a toothless whore.
-got my knees broken by a goon with shovels.
-teased Mike Tyson about his girly voice.
-banged crystal meth.
-encouraged BHJ to blow 7 years of sobriety by calling him a “pussy.”
-cured cancer.
-hit on BHJ’s wife and then took her out dancing to BHJ’s fruitless protests of “Lame!  Lame! Lame!”

Okay, maybe I didn’t actually tease him for staying sober.

Despite all that, I didn’t even have to use my AK.  I gotta say it was a good day.