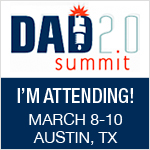 My initial post about my trip to Austin was exceedingly pithy (as was my second post), so I figured y’all need an expanded version.

At the end of Mom 2.0 in April 2011, at the announcement that there’d be an inaugural Dad 2.0 in 2012, my thoughts included:
a) Do we need a separate conference from the moms?  Wasn’t Plessy v. Ferguson overruled?
b) Didn’t some folks try this with marginal success at the M3 Summit in September 2010?
c) Does Texas sell Four Loko?

a) I’m not positive we needed a separate conference, but I don’t think it was a bad idea.  A few of the sponsorships were geared toward men, but most of the companies represented were the ones I’d seen at BlogHers and Mom 2.0.  That said, corporations often market in different ways to men and women, even if the product sold is the same.  I don’t do our family’s shopping, but in more and more households in this country, the “mom does all the shopping” model is going away, so having a focused group of sponsors choosing to partner with dads certainly makes sense.  And, given the plummeting numbers of men finishing high school, going to college, and/or getting into graduate school while manufacturing jobs move overseas or get phased out by automation, households headed by males in the coming decades will become a continuously shrinking percentage (assuming there’s even a male in the household at all).  If nothing else, having a Dad 2.0 meant more focus on us dads, and that’s good.

b) I have no statistical data to rely upon, but from my observation (and I’m nothing if not observant), the inaugural Dad 2.0 Summit was far more successful than the Modern Media Man (“M3”) conference of 2010.  Hell, look at the M3 Summit’s URL (modernmediaman.com), and you’ll see that the content is gone, and it’s got a big ol’ “this domain has expired” note at the top.  There was greater attendance and enthusiasm than I saw at M3 or even the “dad shack” section of Mom 2.0 last year.  And, there are already plans for a 2013 conference.  Had last weekend been a failure, there certainly wouldn’t be a sequel.

So, why’d I go?  I wrote the reasons why I wanted to attend Dad 2.0 in my recap post following last year’s Mom 2.0.  I planned to go as soon as it was announced.  To paraphrase myself:  I like and respect Doug a great deal, I wanted to participate (i.e. speak or contribute in other ways), and I wanted to do more “dad blogging” in the future.  Hence my hosting an Atlanta meetup and joining DadCentric in the past year.  But more than those, I enjoy my writing peers.  They’re different from the peers I have in my civilian profession and in my part-time military service.  In many ways, they know me better.

I mean, would I mount a stuffed horse in a hotel lobby at a continuing legal education seminar? 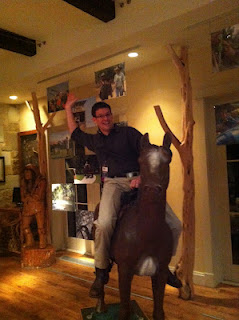 Kinda makes you feel sorry for non-drinkers, don’t it?

Yes, of course I would. But that doesn’t mean I can’t spread my showmanship across different audiences.

Here are the reasons I’m glad I went and will go again next year:

Mike from Cry It Out was the last blogger I enjoy reading whom I’d never met.  Now, I have!

I love Esquire magazine and AJ Jacobs‘ books.  I got to meet him too!

Probably my closest friend since childhood recently started dad blogging (despite blogging for nearly 10 years), and he won the free pass at the meetup I hosted, so I got the privilege of going on a trip with him and introducing him to some friends I’ve made online the past 5 years.  That was awesome.

I got to hear this band twice!

And even got a picture with the singer on her birthday! 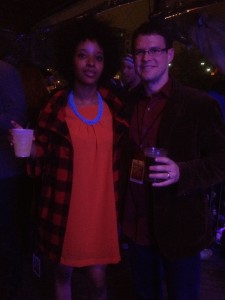 I got to see Whit challenge some crusty old cowboy to a duel!  And get his ass kicked! 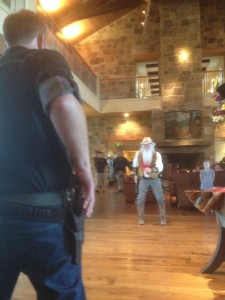 Maybe dueling’s not your game.  I know–how ’bout a spelling contest?

I learned from Dove’s Men+Care representatives that it actually liked (calling it “hilarious!”) my DadCentric review of their products last fall, which I’m hoping segues into an even bigger project this summer!

I bonded over Civil War history talk and comparisons of battlefield visitation experiences with Craig Heimbuch!

So all in all?  A success on all fronts but the rainy weather.  And I blame Milli Vanilli for that.