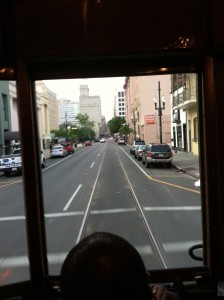 Thursday evening at 5pm, I landed in New Orleans to finish what I started at Mardi Gras.  Or to live blog a mom blogging conference.  Or maybe it was to meet the last blogger I’ve enjoyed reading for years but had yet to meet.  Or I felt obligated to rejoin the friends I’d made at the M3 Summit.

Regardless, I went.  And, within 10 minutes of leaving my house toward the airport, realized I’d left my glasses at home and would be without them for the first time in nearly 30 years.  But no matter.  Vision is optional in New Orleans.

I grounded my gear in John Cave Osborne‘s room while waiting on the guys with whom I was sharing a timeshare to arrive.  JCO went to the gym with a stern “Don’t do any…MUSKRAT SHIT…in my room while I’m gone for 30 minutes.”  I don’t even know what that means, but I respected it.

That night was full of cocktails, catching up with old friends, meeting a few new ones, and exploring Bourbon Street until 3:30am.  Dinner was burgers at Port of Call.  At some point, I sneaked over to Cat’s Meow and put my name on the list before the rest of the group entered the bar.  An hour or so later, the dirty talk began:

I’m not sure who the short girl with curly hair is, but she certainly was NOT invited on stage.

The next morning, I was to “live blog” the Mom 2.0 blog with the “dads track” sessions, which was more difficult than I thought, so I was glad to have gotten 4 hours of sleep.

As was mentioned above, I had really looked forward to meeting Jim from Sweet Juniper and Heather/Jon from Dooce.com for the first session, and I was not disappointed.  All were as cordial and as interesting to talk to about the craft as I had hoped.  Turns out Jim went to law school with one of my best friends from high school and college.

Here are Jim, Doug the Laid Off Dad, and Jon: 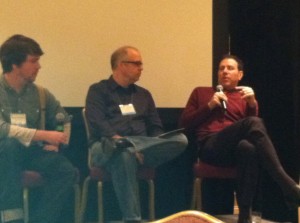 That night, we spent a great deal of time eating Cajun and then consuming an amalgamation of beverages we affectionately (at the time) named the Louisiana Purchase: 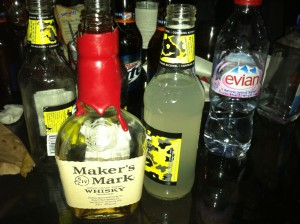 Four Loko and Maker’s Mark?  Don’t mind if we do.

You know you’re a scintillating conversationalist, when the table is reacting like this: 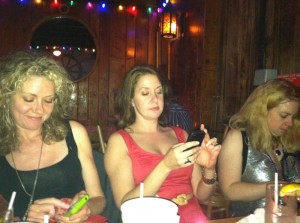 Thanks for the attention, Georgia, Tania, and Karianna!

Judging by my FourSquare updates, we hit Igor’s Bar about 5am, where four of us stayed until sunrise, leaving only when a man with a dog came in for breakfast.  And some private time. 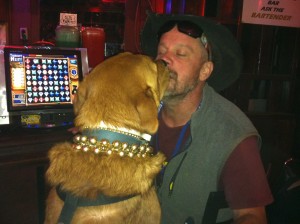 Man gets intimate with dog in Mardi Gras beads.  That shit don’t happen in Atlanta, y’all.

Here we are a few minutes before I tapped out and crawled next door to the hotel: 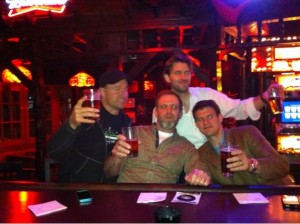 Saturday, I didn’t quite make the morning sessions, but did have lunch at the conference, and enjoyed a Jazz Tour sponsored by PBS that was absolutely excellent.  Even for a cracker who doesn’t really listen to jazz.

Here’s some outstanding musicians schooling us on ragtime and jazz funerals at Preservation Hall: 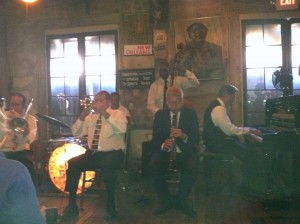 You can’t NOT have chills and permanent grins while sitting this close to a bunch of guys doing what they love and doing it well.

And, I got to visit the 2nd most visited grave in the U.S., which was cool, since I’ve been to Graceland three times: 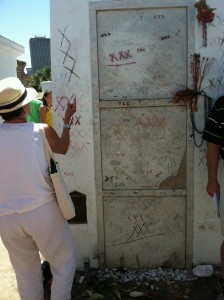 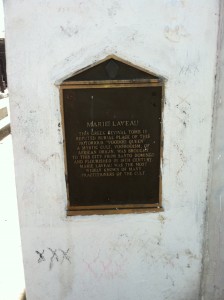 Queen of the Voodoos?  I’ll never know for sure.

That night, it was more parties and some readings by 11 writers.

From the roof of the Ritz Carlton with Pauline (who was part of a rooftop group with me in Manhattan last summer): 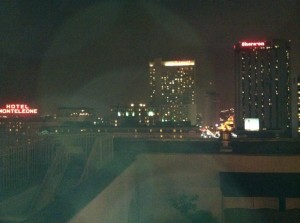 But it wasn’t all debauchery.  Unlike the BlogHers I’ve been to, I actually spent a fair amount of time discussing this hobby (or job, to most attendees) of ours called blogging.  Is it dying or growing?  Does it matter?  Will dads ever have the prominence and clout with markers that the moms have?

And one of the many great benefits of late nights and free flowing Louisiana Purchases is that people don’t have a problem being candid about such topics outside the sessions themselves, even when the feedback is personal.  Am I a dad blogger?  I wasn’t on any of the panels, but I’ve been writing longer than most of the folks who spoke.  Is it because I don’t take this seriously?

Doug asked me after announcing the brand spanking new Dad 2.0 Summit coming out in March 2012 if I pictured myself reading a post on stage like he and Ron did this year.  Or leading a panel.  And you know what?  I do.  I gave him several ideas about topics I think dad bloggers would be interested in–topics I can actually educate others about regarding online marketing, building a brand through humor, etc. — all lessons I’ve learned from blogging that translated to marketing my “real” job.  And if Doug wants my assistance, I want to give it.  I like the guy and respect the hell out of him.  The same can be said for the other guys with whom I spent several hours after all the normal people went to sleep.  This might be surprising to those whose acquaintances are only seen at work or the monthly HOA meeting.

So between the conversation with Doug and the few I had with Britt and other mom bloggers about how I’m “not nearly the asshole portrayed online in real life” and should “write more of my serious posts,” I may veer into some more honest, traditional “dad blogging” posts from time to time.  Keeping it real.  More to follow on that.

As long as I don’t abandon my cowboy status or turn into a loser.