The trip began well, as I was bumped to 1st class for the flight down (likely the last time that will happen for a while, as I moved from Platinum to Gold on Delta after February ended)!  I bonded with the older gentleman from Baltimore who was flying next to me to be in the Hermes parade that weekend.  Then, we stowed our bags at the Ritz and headed into the Quarter for a snack at Desire Oyster House before a delicious lunch with North Carolina trial lawyers at Herbsaint. And, I finally did something I’ve wanted to do for the 20 years I’ve been coming to New Orleans–actually sit at the rotating bar at Carousel Bar.  It was all I hoped to be…bumpier than I expected, but fun to slowly travel around the friendly bartenders and get varying views of the scene around me.  Apparently, all I needed to do was start earlier in the day (as in, just after noon)! 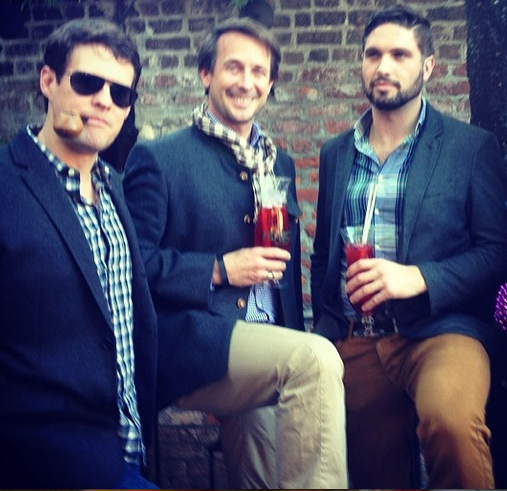 Shortly afterward, we made our annual trip to Pat O’s for hurricanes and the unofficial offsite meeting with our fellow conference attendees.  We were there for several hours.  I forgot to have dinner.  I did have a square chunk of cheese at Napoleon House and some Pimm’s Cups at Tropical Isle, which is a lot like dinner.

Next thing I know, I’m singing not once, but twice, at Cat’s Meow.  Then, a bunch of us parked on the balcony to throw shiny plastic necklaces from China at young adults who seemed to be ignorant regarding their low quality and high availability online. 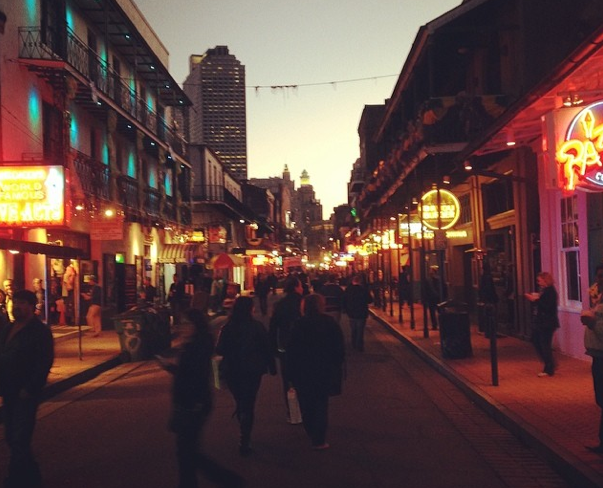 My phone died, and I felt such a tremendous sense of loss and vulnerability afterward that I walked back to the hotel to recharge it and send inappropriate text message solicitations that were not well-received by my wife, who had not been consuming alcoholic beverages for the preceding 13 hours.  Then I took a sustained blink that became a nap.

Friday morning before even showering, we went out for Bloody Marys and to enjoy the riverfront park.  I wrote the hotel slippers I’d worn to breakfast at the club level, because I like incongruous juxtaposition, like Ritz slippers on Bourbon Street at Mardi Gras. 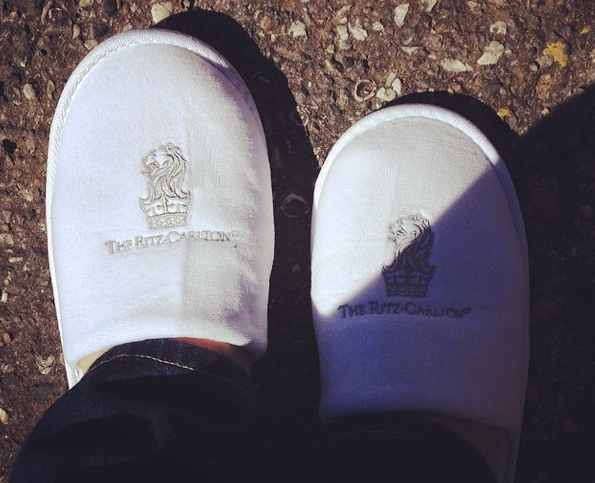 That day for lunch, I finally got a meal at the famous Mother‘s, which usually has a line that goes for blocks, but doesn’t if you wait until 3pm to eat lunch.  It was delicious.

After visiting some other bars, I met up with a friend from law school (who was not there for the conference the rest of us were attending) who attended undergrad at Tulane; we did dinner at Chophouse, which was also outstanding. Then a parade or two, another trip to sing at Cat’s Meow, a stop at Cafe Du Monde at 2am, a walk down to Frenchmen Street for some live music where I bonded with a homeless man who borrowed my pipe for his pinch of marijuana, and Krystal burgers at 4:20am. 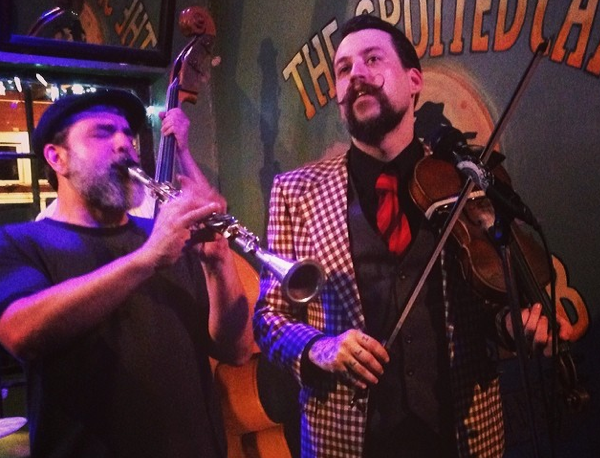 Oh yeah, and I wore this for the post-dinner activities: 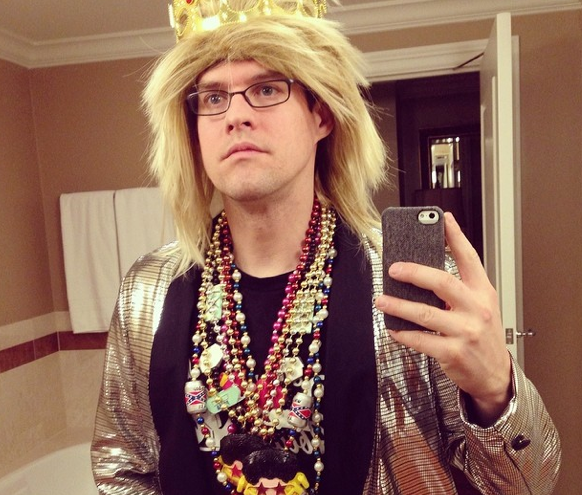 3.5 hours later, we were up and eating piles of bacon on the club level.  Children were frightened.  Then, it was off to Uptown for the Iris and Tucks parades, burgers at The Company Burger, and a stop by Igor’s for drinks, followed by someone I thought was my friend who proved he wasn’t by buying the 2 of us this: 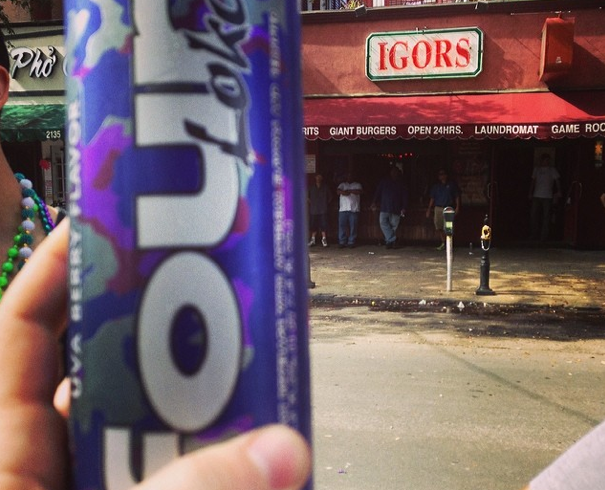 Any headaches or fatigue I had instantly went away, and all was beautiful again.  We made friends with locals and caught lots of plastic items made in China that I could give my children. 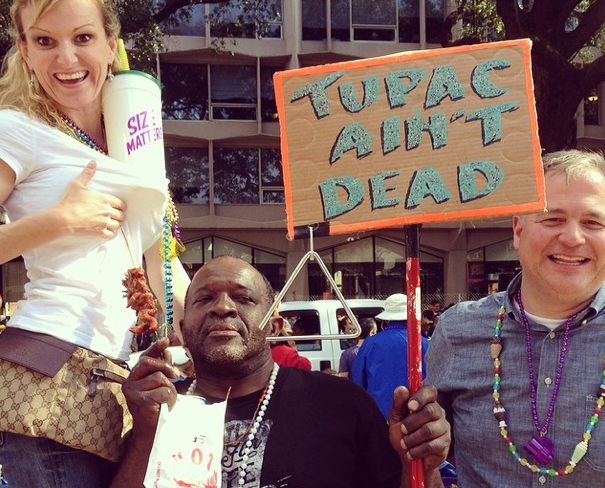 I went home to shower and change for a dinner at Tommy‘s with some of the officers in a professional group to which I belong (so I didn’t want to smell like burger, sweat, and 4Loko).  It too was great!

Then, off to our annual Saturday night before Fat Tuesday Bourbon Street balcony party, which looked like this: 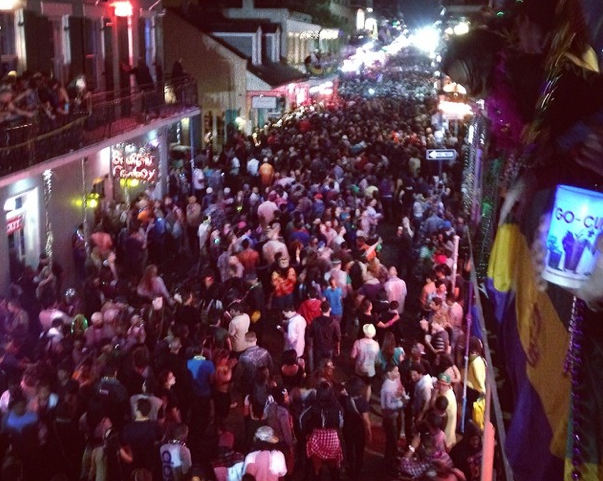 Which was a stark contrast to what I saw right before climbing the steps to our balcony: 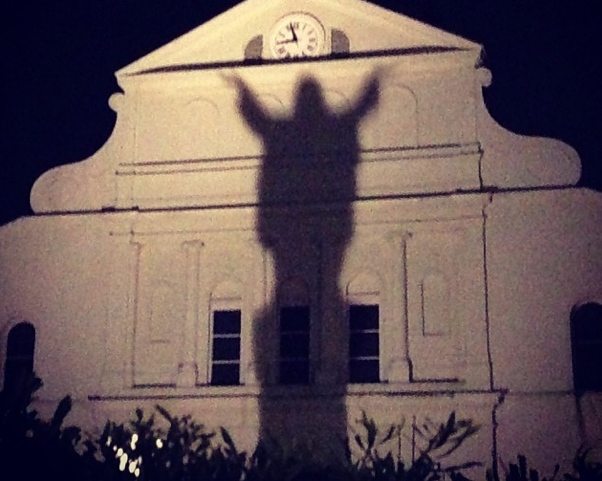 Afterward, it was more time on Frenchmen Street with some of the under-30 guys in our group, and finally…about 3am…I tapped out and walked back to the hotel on Canal by myself.

The next day, we navigated around the parade route and actually made our flight home (unlike the trip 2 years ago), and I greeted 3 children with strep throat!  And I longed to be back in New Orleans (or home with healthy children).