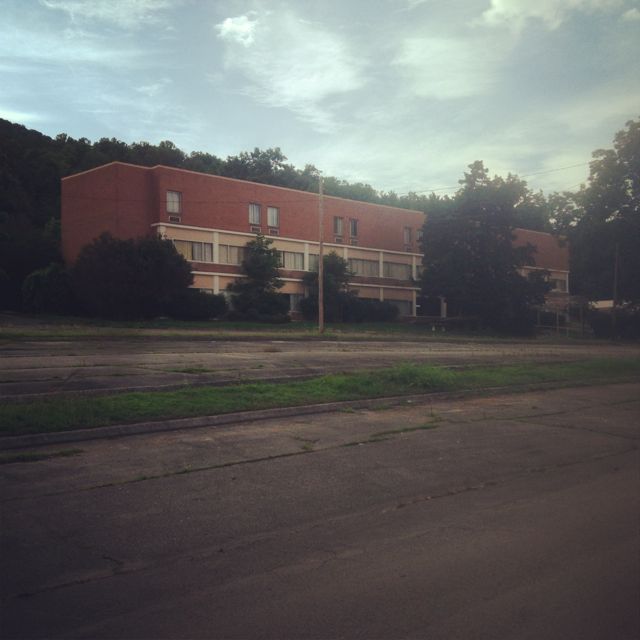 Sunday night, I traveled for the 3rd time with the Paranormal Georgia Investigations (PGI) team on a paranormal investigation.  Or, as I affectionately (and redneckingly) call it:  I went ghost huntin’.  We returned to the spot we explored on Veterans Day 2012:  the Old South Pittsburg Hospital in east Tennessee.  This time, however, I took our eldest.

It was a good bit different from the trip a few months ago.  The temperature was, as one would expect, quite a bit warmer, which added a dimension of misery to the process of exploring the most active 3rd floor in the dark without air conditioning.  The break room had been moved, which was nice, and we did have a/c in the rooms in which we slept (yes, this facility allows its investigators to spend the night and actually try to sleep).

After several hours of exploring some of the “hot spots” where we’d seen activity on our last visit, we went into a room occupied by an older lady who died named “Miss Martha.”  Her belongings (mainly shoes, a few articles of clothing, a Bible, and bed linens) were still there, and so is she (if you believe in that sort of thing).  We sat on her carpet with flashlights and K2’s out to allow possible communication.  As I mentioned, it was hot in there–nearly 90 degrees, even after midnight, and the windows are all completely shut.  Suddenly, I felt a cool breeze that stopped, and the temperature where I sat dropped at least 10 degrees.  The hair on my arms stood up, and chill bumps traveled along my spine.  I asked the others if they could suddenly feel the marked drop in temperature, but no one could.  Heather reached over to my arm and could feel the change over me, but the change was nowhere else in the room.  It was wonderful to cool off, of course, but it was also my first personal encounter with a paranormal occurrence of sorts.  I enjoyed it.

A not-so-enjoyable paranormal occurrence greeted us about about 0415 Monday morning.  The 3 of us guys were in a room together to take advantage of the limited number of rooms with a/c.  Jordan and Jeremy stayed up talking with the lamp on for a good hour to 1.5hrs after we all lay down on our beds; I went to sleep immediately.  Once they decided to stop talking and try to sleep, however, Jordan turned off the lamp next to his bed, so that we could all sleep in the dark.  About 20 minutes later, I woke up to horrified screams from my roommates.  Jeremy had leaped onto Jordan’s bed; Jordan sprung from his bed to turn on his lamp; Jeremy was yelling Jordan’s name, and Jordan was screaming back.  My heart rate went from its resting rate to its I-just-ran-a-10k rate in 1 second.  Tammy and Heather burst into our room through the Jack-and-Jill bathroom to see what had happened, which was this:

20 minutes after the lamp had been turned off, and Jeremy was teetering at the edge of being able to sleep, he heard footsteps approach his bed.  Loud ones.  Quickly approaching.  Then, a distinct pushing onto the bottom of his mattress toward his legs, followed by a jolt of negative energy.  That’s when the screaming began.

We finished the evening in Heather’s + Tammy’s room but left a lamp on for the last remaining hours of darkness before rising the next morning.  Jordan and I were able to fall back asleep, but Jeremy sat on his bed the rest of the night.  He wasn’t alone in his insomnia, however.  A distinctly audible whisper made sure he couldn’t rest in peace when it spoke in his ear:  “Night!”