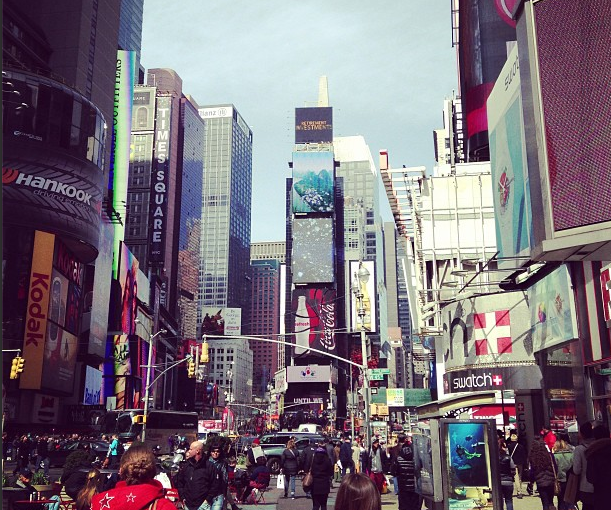 Being easily coaxed by the internet, we gave in and decided to let our soon-to-be-leaving-the-house senior and a friend go to NYC for her spring break last week, because we are not assholes.

We flew up Wednesday night, dropped off suitcases at the condo we found on www.vrbo.com at 37th Street and 9th Ave, and we set off for the pizza joint recommended by the door man.  We walked around Times Square and met Woody and Buzz.  We got real cold. 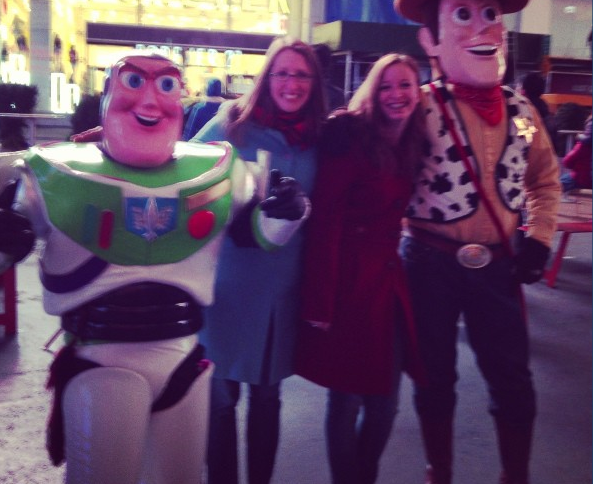 Thursday, we walked down to SoHo where I could try to find my size in the Campers I wanted at 2 of their retail stores but failed to find them (I called and had them saved at the store on 5th Ave instead, which was my 4th location to search for the damned things).  Then we spent A LOT of time at the Uniqlo store buying clothes for the teen (and a few for the Mrs and me).  I wandered away and checked out the united colors of Converse. 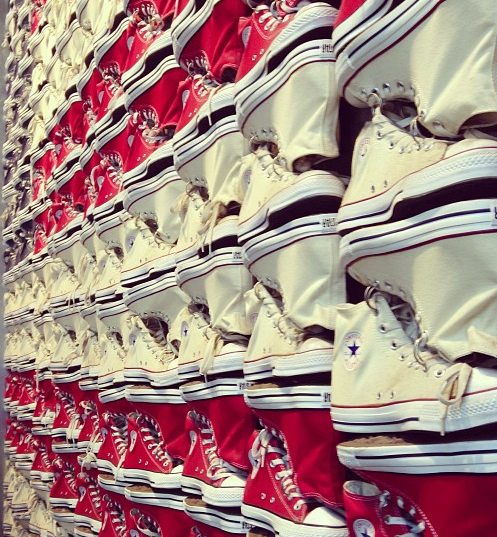 We then took the subway back up to Times Square to the TKTS booth to try and get tickets for one of the 2 shows Emilie specifically requested to see while in New York:  The Lion King or Wicked.  And despite my telling my bride we should buy tickets way in advance for said show, she advised that since these shows have been showing for several years, we would have no problem getting them at half off at the TKTS booth, so we waited in line around an hour and found that tickets to both shows were available…on Tuesday:  3 days after we flew home. 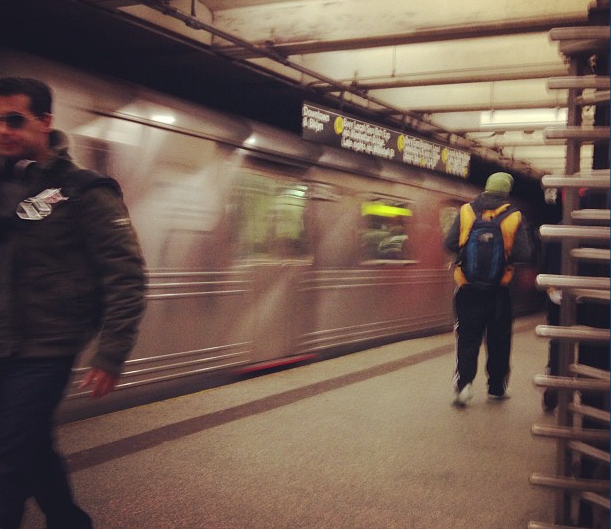 After the inevitable weeping and gnashing of teeth subsided, we convinced young, teenaged Emilie that there were, in fact, other good shows on Broadway in New York City, and maybe she should show some fucking appreciation and an open mind and try one of them!  Since we’d flown all the way up there and all.

And then we saw “Nice Work if You Can Get It” starring Matthew Broderick and Blythe Danner and a bunch of other good actors I didn’t know from movies.  And you know what?  It was outstanding.  Maybe my favorite play ever.  Hilarious, well-acted, and full of good music from the 1920s (the time period in which it’s set).  I loved it. 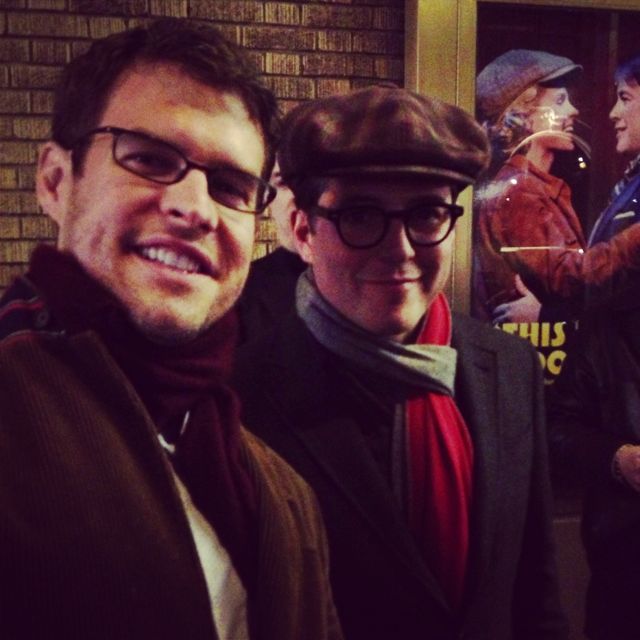 Kinda makes you want to spray paint “Save Muskrat” atop a water tower, don’t it?

And the woman whose character uttered the cautionary code word that launched this very blog: 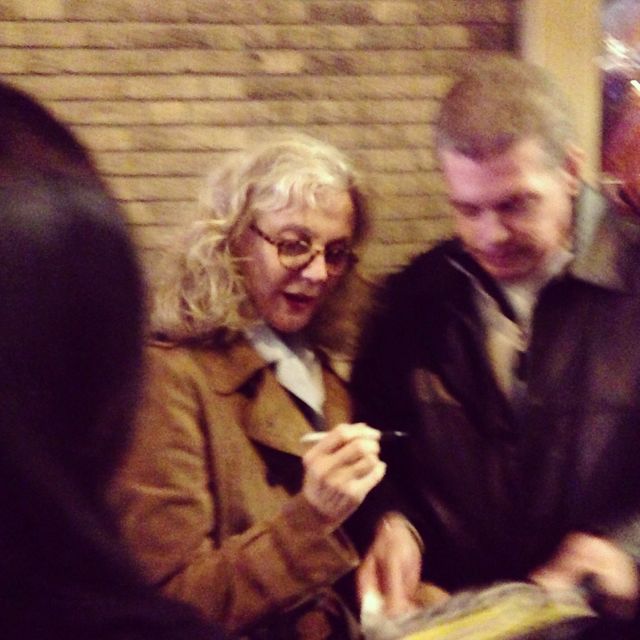 Look at the camera and say “muskrat!”

On Friday, it was supposed to rain, so we went north several blocks to the MoMA to take in the stars. 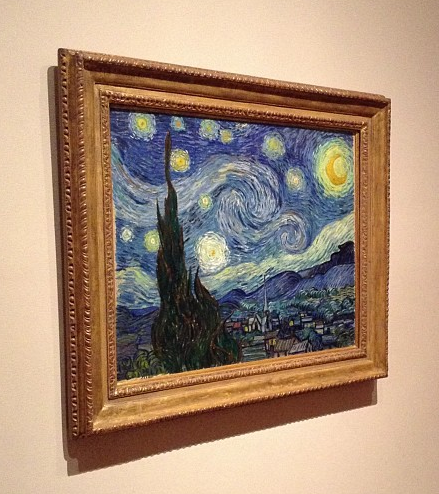 And we finally picked up my Camper shoes.

Then I asked myself the age old question, “Am I a man?  Or am I a Muppet?” at FAO Schwarz.  The answer:  a muppet. 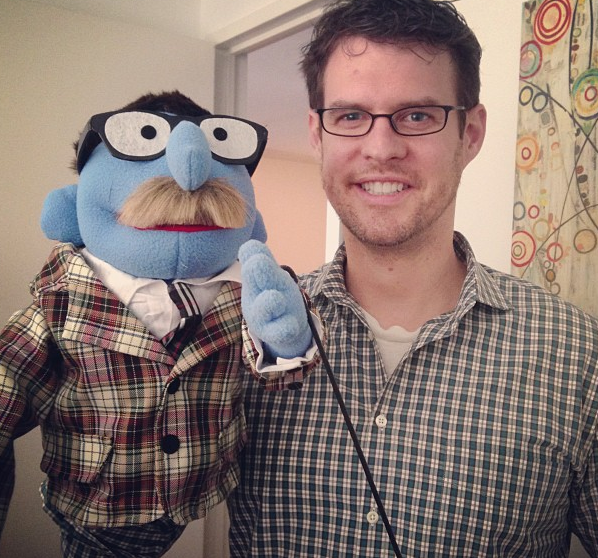 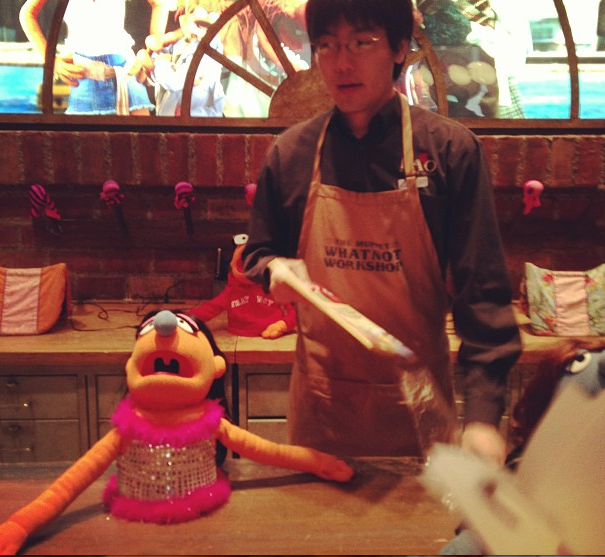 My bride and my oldest also followed their narcissism toward Muppets in their likeness (they actually did it first.  I succumbed to peer pressure afterward).

Dinner that night was Asian fusion at Qi Bankok (very good) and then our show was Avenue Q (off Broadway now), which had a bunch of swearing and fornicating puppets in it that were pretty funny but a bit juvenile for my taste.  The teens loved it, of course.

The Mrs dragged me to Mood Fabric, but I’m getting a nice linen jacket out of the deal, so I didn’t mind.  Then it was dessert at the base of the Empire State Building after Emilie wanted to go to the top, but they no longer let military go to the top for free, and it was really cold and windy, so I didn’t want to spend $100 for all 4 of us to go to the top, but I offerred to let her go while I sat in the bar at the bottom and drank beer, but she turned me down.

So, I agreed to let the 4 of us pile up in the back of a pedicab instead, thinking this would be a cheap thrill and a way to get out of the cold for our walk of 2 avenues and 3 blocks back to our condo.

Turns out the price per avenue block ($3) and street block ($2) was PER PASSENGER so what I thought would cost like $30 after tip was actually OVER A HUNDRED FUCKING DOLLARS which made me sick to my stomach and wish we’d just gone to the top of the Empire State Building and walked home, but my bride and the 2 teens loved it, as you can tell from the laughter as we weaved among cars on the streets (and sidewalks – see 1:18) of Manhattan.

The next day we had a wonderful brunch at HK Hells Kitchen before flying back.

So concludes another successful trip to New York (albeit my only one involving so much sobriety)!  Emilie and her little friend loved it and were very grateful that we gave in and allowed her to take it, so thanks for that, loyal blog commenter people.  And despite my initial misgivings about confinement with 3 women for 3 nights, I enjoyed it, too.  Especially since I knew my old Reserves unit was preparing for a major inspection that weekend.