Last Sunday (as in, a week ago, not yesterday), our sewer line backed up, and stinky poo water began pouring from a little overflow valve pipe into the basement for a while, so we had to cease all use of drains in the house for the rest of the day.  The next day, some plumbers came by with long coils of metal with saw teeth on the end to try and cut through whatever was blocking the line.  They even brought a camera that could extend 100′ or so to look for what was blocking it.  Despite multiple attempts with these tools and a 4-figure bill, the problem was not solved.

So, they told us for a mere additional $6000 and change, we could dig up the new sod I bought and installed last summer, create a trench in the front yard 10′ deep, and pull up the old sewer line made of terracotta and install a new one made of PVC pipe.  I told him I’d think about it.

The next couple of days, we ate meals out, showered at the exercise room in the basement of my office building every other day, and let excrement pile up in unflushed toilets.  It was not awesome.

On Thursday night, however, we found someone else who dug up the yard for half of what the first company wanted, as a result of my profanity-ridden gripefest to my bookkeeper Tuesday morning about our family of 6’s inability to bathe or flush a fucking toilet for the previous 3 days.  She suggested Jimmy, the plumber who’d done the same required task in her front yard.  So, we used Jimmy and saved over $3,000.  We liked him so much that when the kids’ toilet overflowed on Saturday, I called him and just replaced the whole fucking toilet instead of the little rubber valve thing and chain that go in the tank, because I figure the more things I rip out of this house from its construction in 1968 and replace with items from the 21st century, the better.

So now we have a sewer pipe and a toilet from the 21st century in our house. 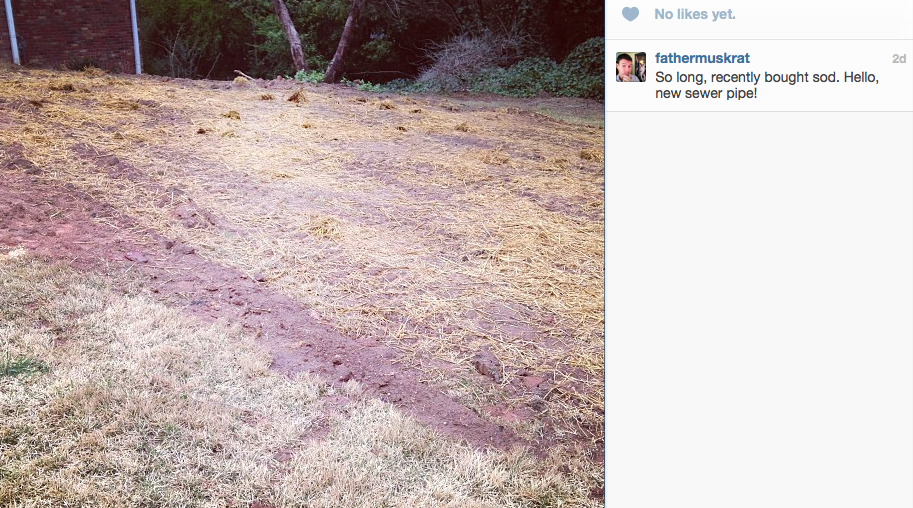 Saturday night, I was at a gathering my wife hosted at her store, and a friend asked, “Do you like your house?”

I don’t think I ever really answered, but I thought about it for the rest of the weekend.

Finally, I believe I’ve decided my answer:  “I will eventually.  But it is not yet ‘eventually’.”