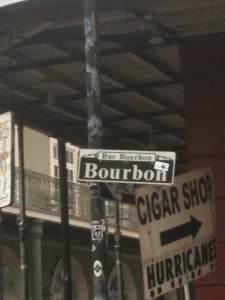 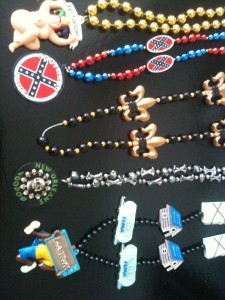 2.) Power through the sleep deprivation. 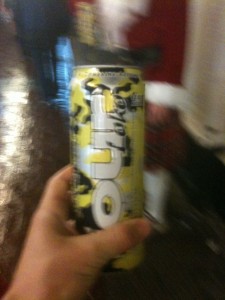 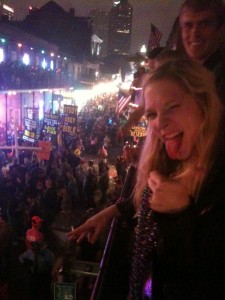 4.) Pay attention to the signs. 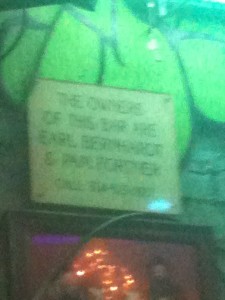 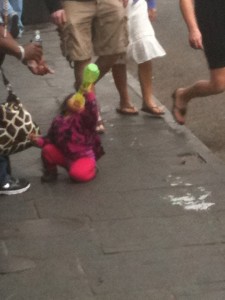 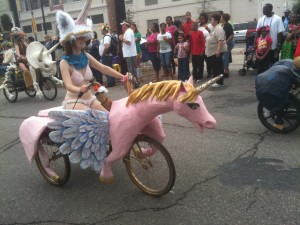 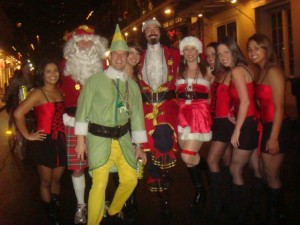 8.) Go with a Christmas theme. 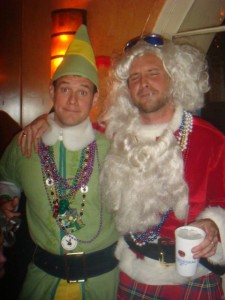 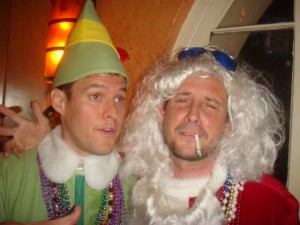 The rest of the story:

Before arriving in New Orleans, my work wife and I shipped four boxes filled with thousands of high end beads and 50 feather boas to the W.  Upon checking into the room and our conference at 11am, we promptly left said conference for Pat O’Briens, where I declared it time to have ONE hurricane.  But that didn’t work.

Three hurricanes each later and still without lunch, we wandered up to the Tropical Isle for hand grenades.  Inside, I saw the sign pictured in the blurry shot above (#4) and thought I’d call the phone number listed underneath the bar owners’ names, figuring I’d leave them a nice voicemail.  A lady answered the phone.

Her:  Hello?
Me:  Hey!
Her:  Well…hello!
Me:  I’m at your bar!
Her:  Really?  That’s nice…which one?
Me:  Y’all have more than one of these things?  I’m on Bourbon.
Her:  Why, yes…three on Bourbon!
Me:  I’m at…Hell, I don’t know!  I think I’m at the original.
Her:  Well, that’s nice.  Is everything okay there?
Me:  Did you know you caused me to miss a formal in 1994?
Her:  Oh no–I’m sorry about that…
Me:  Yeah, I woke up a few hours after trying a few of your “hand grenade” drinks on the floor of my hotel room, and while my fraternity brothers, dressed in tuxes, laughed at me sprawled out on the carpet.  It was humiliating!
Her:
Me:  Well, I just thought you should know that.  I’m doing better today.
Her:  Okay, well, thanks for calling…

Then we walked outside to find a child turning a hand grenade vertical on the sidewalk (see picture #5).

Dinner was at the jacket-required (sorry, Phil Collins) Galatoire’s, where we were handed “to go” cups and our ticket before we’d finished our meals, because of my affinity for loudly declaring that THIS TOWN IS FILLED WITH WHORES!  I think we went back to Pat O’s and to the Cat’s Meow and some other bars with music and drinks and people in them, where I seem to have found that a nap was in order, only to wake up to find most everyone I’d come with was gone, along with my iphone, so I walked back to the hotel to cuddle with my work wife.

Day 2 began with a couple hours spent at the conference we were there to attend.  Then I think we had some oysters, and the weak napped while I got got educated some more at the conference and FINALLY figured out where my iphone was (one of the guys I was with picked it up for me after I walked off from the table where it sat).  That night, my work wife and I had arranged for the balcony at Cat’s Meow (see picture #3) after enjoying some strange beverage that’s been outlawed in most of the country (see picture #2).  The girl next to me on the balcony was 19 and was there with her father, who was in the middle of a divorce and was trying to win the “cool parent” title.  Most of my “overheard” tweets from Friday night demanding to see more tit were from her.

Oh yeah, even though the costume party was set for Saturday night, I thought I’d wear the coat on Friday night, because everyone loves a singing Robin Hood:

Saturday, we watched the Krewe of Tucks parade (see picture #6), which had a theme called “iTucks: what’s APPenning.”

So, the floats were about Farmville. 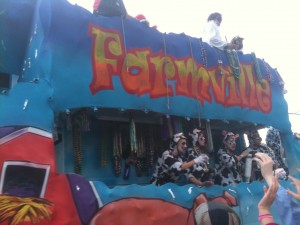 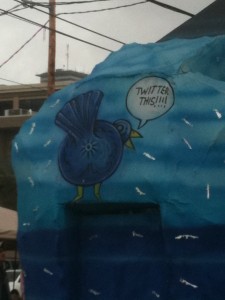 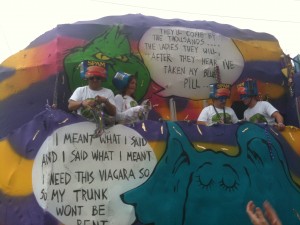 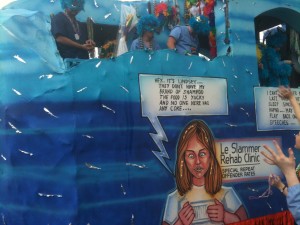 Next, it was the House of Blues for crawfish and beer, followed by a nap, and then– the highlight of the trip: 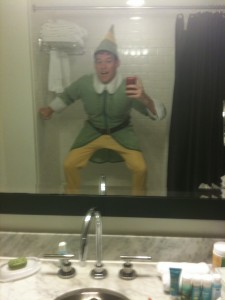 Picking a Buddy the Elf costume (from the movie “Elf“) for the Christmas-themed party Saturday night and then walking up and down Bourbon and Royal Streets in said costume has to be the best decision I’ve made in at least 2 years or so.

I was asked for a group picture between 40 and 500 times.  I heard screams of “Hey Buddy, what’s your favorite color?” and “I KNOW you!” and “I’ll help you find your dad, Buddy!” and “What are the 4 food groups, Buddy?” and “Buddy!” from every direction.

Being surrounded by Santa and Mrs Claus for said walks up and down Bourbon made it even better: 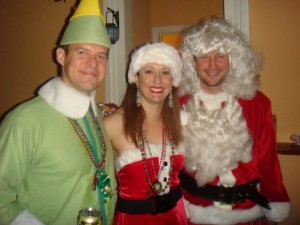 And so concluded another monumental Mardi Gras! 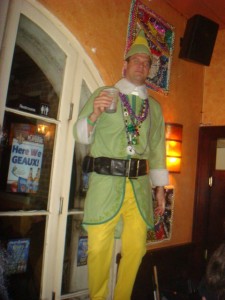 At about 4am (or, right after I got asked to leave the bar where I perched upon a stool and declared it my stage).

Am I ready to declare this better than last year’s Mardi Gras trip?  Absolutely.