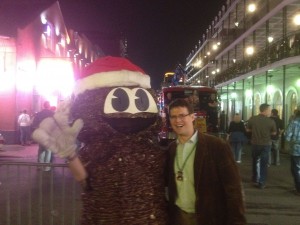 This year, I thought it rather foolish to go to New Orleans for a 13th time and spend my 4th Mardi Gras, given my crossing into “upper thirties” territory last June and my work wife’s turning 40 just a couple months ago.  Also, how was I to top my Buddy the Elf does Mardi Gras experience of 2011?  Luckily, I pushed such foolish defeatist thoughts from my head and went, because basing plans on “I’m way too old and mature for this” or predicted rain storms are for the unimaginative and the perpetually homebound.

I’ve met those people, and I am not they.

I decided I would NOT get off the plane and go to Pat O’Brien’s to down 4 quick Hurricanes this year by 1pm like I did last year, so we met with a marketing firm that might actually help us get more business, so that we can go on more educational, life-affirming trips like this one.  After an hour of that, such plans ceased, and we dropped off suitcases with the bellhop and bolted for Bourbon Street without even seeing our room, because everyone knows stopping by one’s room at the beginning of a vacation only leads to unproductive and meaningless sex with one’s straight male work colleague, which is the last thing I wanted on a Thursday afternoon in New Orleans.  No sir.

“Get thee to a tavern!” the voice in my head said, and if I’ve learned anything in my 36 years, it’s to listen to that voice in my head.  You know the one.  So we went to Desire Oyster Bar AND THEN Pat O’s for some Hurricanes, because that’s what wise veterans of Mardi Gras do.  We met more lawyers and vendors who love to get lawyers’ business from our conference, and they said things like, “Hey- I didn’t know y’all were at the conference this year…you must’ve been sitting on the other side of the room!” so I said things like, “Bitch, I know what you’re insinuating.” and then stared at them until they shuffled off without suggesting I hadn’t exactly BEEN to the conference yet, because it’s THE BARS that are important in New Orleans, not continuing legal education.

According to Foursquare, we visited some other bars, and I met kind people like this medical illustrator, who became a close friend with her non-verbal communication skills: 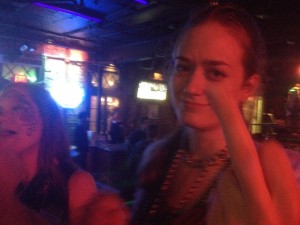 Will you come home with me and babysit my children?

After around 1am, my fairly new boots started rubbing me the wrong way, so I went back to the room to change shoes, and while I was up there I thought:  “if I go back there, I’m going to spend the next 3 days in misery, convulsing and throwing up like the past several years.  Maybe I should go to bed.”  So, I did.  My work wife came in around 5.

After breakfast in bed–because that’s what same sex work colleagues do to take their awkward friendship to the next level–we headed to one of my favorite places to eat a dead pig in the world:  Cochon.  I love Cochon like I love hot coffee and a crushed ice blow job. 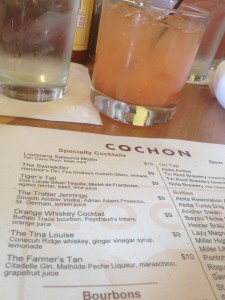 Then we went to the historic Columns Hotel in the Garden District to drink many many Pimm’s Cups that were delicious and made all the colors on the floats in the Krewe of Hermes parade more beautiful.  Especially after ignoring Yelp’s advice on refusing more than one margarita at Superior Grill, because heeding the advice of Yelpers is not what one does when the drinking began at noon that day.  Besides, they were delicious. 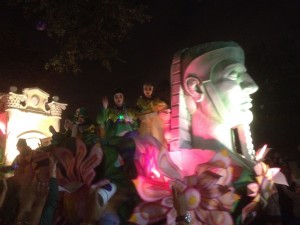 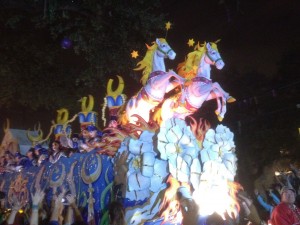 This is 3 minutes long, but it shows more pretty colors and how much fun parades can be (even for the kids!):

After the parade ended, everyone returned to their rooms to put on nicer clothes for our Friday night on Bourbon Street. 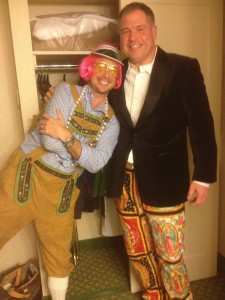 At the historic Carousel Bar at Hotel Monteleone, we received several stares, a few laughs, and two roses from one older woman who found Mike’s pants and my lederhosen “very different.” 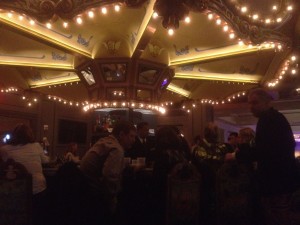 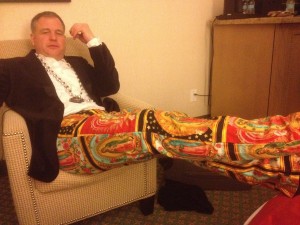 I don’t always wear pants, but when I do, I will fucking blind you with them. 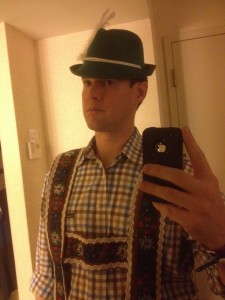 How come I don’t wear this to court…yet?

We then hit some bars with music and crowds, and I’m not sure what happened until we went to bed, but I’m glad it wasn’t too horribly late, because Saturday was approaching quickly, and Saturday matters.

Saturday morning, I stood in line over an hour to eat at Stanley Resturant in Jackson Square, but it was worth it (after the milkshake I had in line to stop the shakes…see the irony there?).  But then the forecast rain began, and it came hard.  We hit several costume shops for everyone in our group to be suitably dressed for the annual balcony party, and we happened to pass an Ace Hardware, and someone said, “Hey, why don’t we go as a German beer drinking team…with FUNNELS!” and that person became our leader forever. 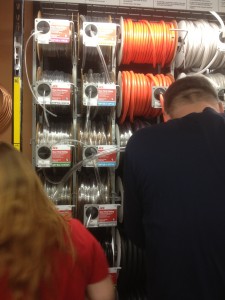 2) Get the Ace employee who greeted our entrance with, “Let me guess–y’all want to make beer bongs?!” to help. 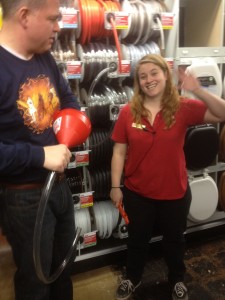 3) Stand and smile, because this shit is about to get real. 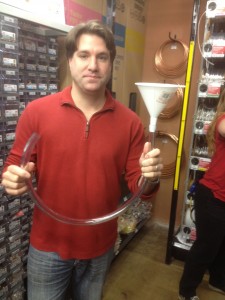 Now it was time for another costume change and to see how this plan would work, because it was 4-something in the afternoon, and we all know what “after” and “noon” mean when used in concert:  you are behind on your drinking. 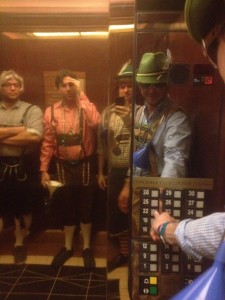 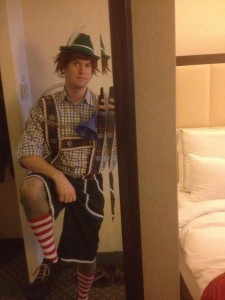 If Dale Carnegie didn’t include “Go out on Bourbon Street in lederhosen while carrying beer bongs” in his famed “How to Win Friends and Influence People” book, then there clearly needs to be a 21st-centruy corollary written by me.  Learn why after the jump:

Take this kind lass, who decided to forego the beers and go straight for icy mixed cocktails, because it was daylight and rainy, and why not?  She was a friend, and she was influenced.

Or this skilled coed from U of Colorado:  friend.  influenced. 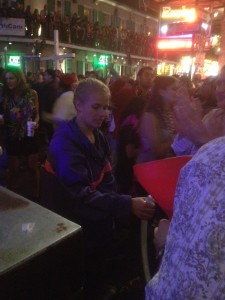 Or these teachers from Detroit: 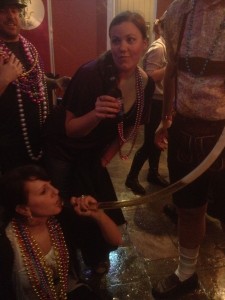 Or the social workers from Houston: 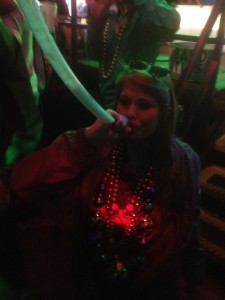 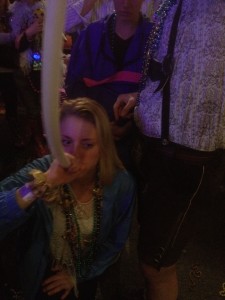 And our friend, Mel, whom even the cops couldn’t stop! 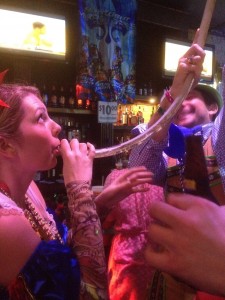 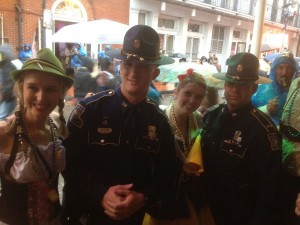 And even a few dudes joined in the fun, buying one beer for me for every one they put in the funnel, because that’s how capitalism is SUPPOSED to work.  And, again:  friends who have been influenced. 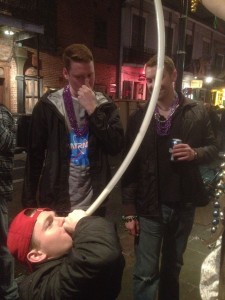 Around midnight, I succumbed to the suggestion to try my first 5 Hour Energy vile, and around 4:30am, I decided donning a horse head and tutu on Canal Street would be a great way to conclude the evening.  This may or may not have caused us to miss the plane ride home. 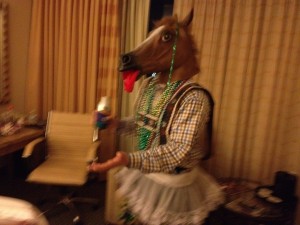 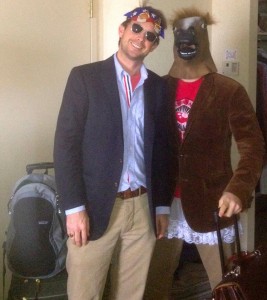 This is what TSA agents saw Sunday morning, because I am awesome.
And you can’t coach “awesome.”

That being said, it bears repeating:  bring beer bongs and lederhosen to Mardi Gras.  It’s your civic duty.