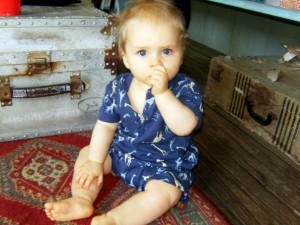 Owen isn’t like the rest of us.  He’s chill.  Cool, even.  Hangs out with his thumb in his mouth and watches the rest of us worry about whether floors are clean, homework is done, mail is opened, bills are paid, dogs are fed, and the thermostat is set at an adequately uncomfortable level.

I used to worry he was going to grow up to find solace in the bud, but now I think he’s already started.

Sometimes he’s content to just sit in the corner and stare at the bushes swaying below him, taking in the flowing colors.  Or is he planning where to plant his next stash?

When I asked him about his porch-staring-practice, he  gave me the Ghost of Christmas Future.  I followed his silent point toward my stack of CDs and saw it:  “The Chronic” by Dr Dre. 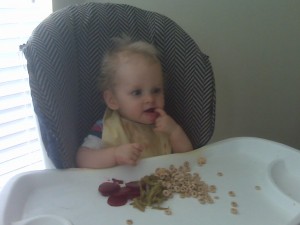 He eats like Sally Struthers after an African fundraiser.  Look at that pile of shit:  beets, beans, Cheerios.  Ain’t no way a lucid person mixes that together and consumes it.  The kid is totally stoned. 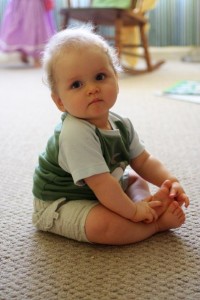 Perhaps most telling is his lack of libido.  Everyone knows THC lowers libido.  When we heard we were having a boy last year, neighbors with sons guaranteed I’d get baptized as soon as he got a boner and pissed all over us.  But Owen doesn’t get boners.  His little wanker remains calmly flaccid during changings.  Even as he quietly hums “Box of Rain” to himself, there are no streams.

Owen laughs for no apparent reason.  Sometimes, he follows a chuckle with “dooooo,” which is 10-month-old for “Dude.”

Owen hides under the bed whenever I put on a suit.

Owen has been known to gnaw on the dog’s chew bone.

Leave a Reply to JD at I Do Things Cancel