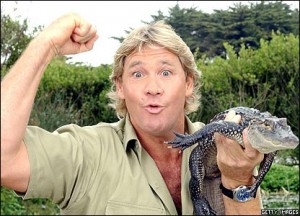 On Saturday, I spent an entire day in a tent with a black Master Sergent named Jon. At our first conversational lull, Jon belted out this chunk of wisdom:

MSgt Jon: You know, black people are smarter than white people when it comes to animals.
Me: How’s that?
MSgt Jon: Animals are not your friend, my white friend.
Me: They’re not?
MSgt Jon: They’re not. You’re a lawyer–how many times do you see a dog bite case involving a black person?
Me: Never.
MSgt Jon: Steve Irwin was white. Siegfried & Roy are white. That crazy bitch with the pet monkey who damned near ate her face:  white, too.
Me: You may be onto something!  We honkies are always trying to domesticate creatures that don’t want to be domesticated.  Did I ever tell you what I did to a ‘possum when I was a kid?
MSgt Jon: In Africa, we learned to run from animals. I don’t know what y’all were doing in Europe at the time.
Me: I think we were handing Native Americans blankets we’d just rubbed our smallpox sores all over.
MSgt Jon: You are never going to see “Kunta Kinte’s Wild Kingdom” on TV, I can guarantee that. Know why?
Me: Because he’s a fictitious character from Alex Haley?
MSgt Jon: No. Because black people know that animals are not your friend.
Me: Thank you. Are you finished now?
MSgt Jon: No. Black people are smart enough not to use pressure cookers, too. Did you know that?