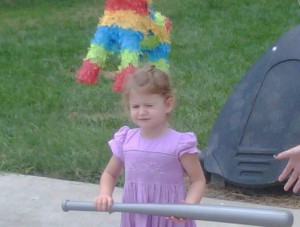 Maddie the Toddler turned 3 last weekend, so we decided to throw a “Three-esta” and invite all our neighbors with children (and a few without) for fun with quesadillas, a pinata, Fanta, and tequila. I even told everyone they could park in the front yard and wear wife-beater tank tops.

Then I got really excited about the event and started inviting friends on Facebook, only they would frequently write back with, “What should I bring?” and I replied with, “Well, it’s going to be a yard full of toddlers, so I’d say the usual–hash, blow, weed, meth–in that order of importance.” I thought this was good, clean humor, but Pretty Bride had the gall to ask if I used my Muskrat Facebook profile or, like, my real one where my clients and colleagues are, and then I realized it was the latter and that I was a dumbass.

Nevertheless, the event was a success, from what I remember.  At one point, the children were swinging at the pinata I’d hung from the basketball goal, and I suggested, in front of all the parents, the following:

Me:  “You know, we should’ve made little police uniforms for everyone.  We could put nametags on them, like Koon, Powell, and Wind right before they start whacking away at the colored bull and teach them to say, “Stop resisting!” and “Stay down, mother fucker!”
Neighbors:
Me:  “You know, like in ’91…Los Angeles…when the…yeah.” 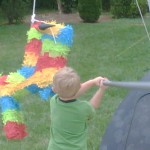 So that didn’t go over all that well.  Shortly after the gobstoppers, now-and-laters, and double bubble gum coated our driveway, I realized that a) I was the only person at this party who was drinking and b) everyone was starting to leave.  I found both to be encouraging. 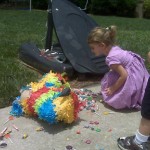 Maddie had a ball, and I think everyone from the block still likes me okay, despite the sudden retreats into front doors earlier tonight when I went for a run.  We’re already planning next year’s Nathan Bedford Four-rest party in which everyone wears sheets and hoods.  It’ll be after Memorial Day, so I’m sure it’ll be fine.

Leave a Reply to headbang8 Cancel