Last weekend, Maddie rooted through our closet and found my camera.  She then began running about the house taking pictures. 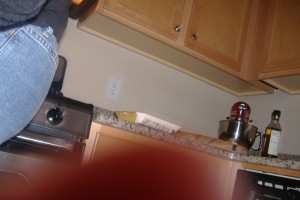 The first one appears to be Pretty Bride’s backside, Maddie’s finger, and a portion of our kitchen.  Maddie calls it “Precursor to a Meal.”  It’s available for $20. 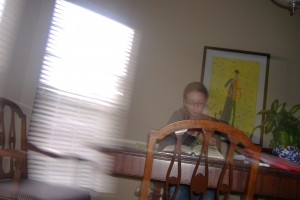 Here’s where Maddie really tries to push her art.  Emilie reads before natural light while Harry Teague folk art looks on.  I believe Maddie calls this “Pensive Saturday.”  It’s on sale for $75.  But I sure as hell wouldn’t pay that. 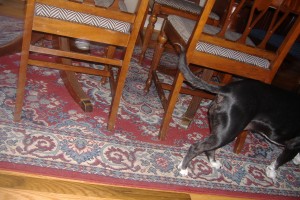 This photograph features Winnie’s ass, my deceased great aunt’s dining room furniture, and an area rug on loan from my lawschool girlfriend (who borrowed it from her sister) eight years ago.  Maddie calls it “Now You See It, Now You Don’t.”  It sells for $25. 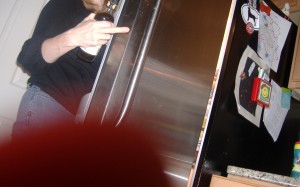 This picture shows Pretty Bride’s pulling some type of liquid (Dale’s sauce?) from the refrigerator, Maddie’s finger again, and some of Maddie’s shitty art from Sunday School, held on by a Country Music Hall of Fame magnet from a Nashville giftshop, a New York magnet from a street vendor, and a “Smile!  God loves you” magnet my mother gave me when I got my first post-collegiate apartment to remind me to abstain from premarital sex.  There appears to be a wedding invitation that I’ll likely try to find a way to get out of attending and a dog sticker from a bar in Martha’s Vineyard.  Half a sippy cup on the counter represents optimism.  Maddie calls this “Inadvertant Communication.”  Because it features some of her drawings and depicts a rarely discernible “bird” from her mother, she asks $80 for it. 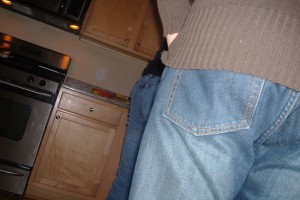 And finally, this photograph depicts Pretty Bride’s backside as she prepares supper and your protagonist’s backside as he waits to eat supper.  Maddie calls this “My Parents:  the Assholes.”  She’ll let this one go for $2.