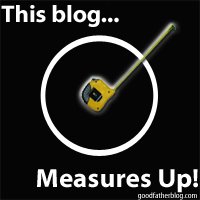 I must be doing something right, as another blogger who identifies herself as a “punk” tossed this tape measure at me yesterday and let me know I “measure up.”  I assume she means above the waist, but considering my streaking rampage through an Iowa cornfield after watching “Old School” a few years back, I can’t be certain.

I’d first like to applaud her vague reference to Ralphie’s father in her title; I did the same thing a while back.  Great minds, etc.

Apparently, the goal of this meme is to honor men, which causes me to be even more surprised at finding it on my porch, as I’m not all that manly.  However, I’ll play along and pretend I don’t sit with my legs crossed or sing along to Madonna on the radio.  Here are the activities associated with this “manward.”

1)  Say something nice to a man in your life. 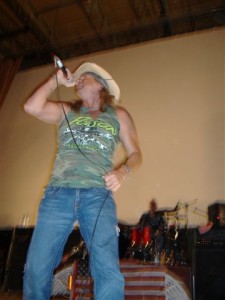 Dear Bret Michaels, Thank you for flying all the way to Balad, Iraq last year and performing for all of us deployed folks stuck in the sand during the fall and winter holidays.  I especially liked that you shaved your armpits, as it’s hot out there, and you very probably would’ve smelled like that bag of trash I left in the trunk of my black car that day in July when I forgot to hit the dumpster.  I also appreciate your giving me a “high five” when you saw the look of pure adoration on my face after you opened with “Sweet Home Alabama.” And when you rested your left hand on my right shoulder during our group photo, well, I was like a prepubescent school girl being touched by Edward Cullen.  It’s just too bad you didn’t make it to my trailer after the show like you promised.  That truly would’ve been nothin’ but a good time. 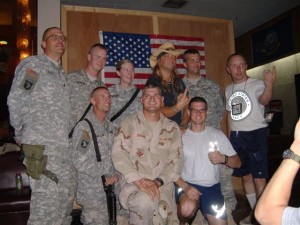 2) What are 6 ways in which I measure success (in life or in blogging)?

a.  How many tax deductions can I find this year?  Every February, I reserve a couple weekends to work on our tax returns, and each year, I strive to beat last year’s tally for deductions and credits.  I don’t cheat; I always have the required “good faith belief” that they’re legit.  I just derive an inordinate amount of satisfaction from keeping money away from the horribly inefficient machine that is our federal government.  Last year, it was over $60,000.  That’s going to be tough to beat.  Adding an infant will help by $1000, though.

c.  Am I staying in touch with my friends from childhood?  I was invited to >50 weddings in my twenties; most of the time, I went.  However, now that nearly everyone’s hitched and has urchins, keeping up in person is much harder.  Facebook makes it easier to see what they’re doing, I suppose, but is that genuine keeping in touch?  No.  Maybe I should man up and tell them about my blog.

d.  Did I win Jerry Becker’s annual College Football Pick’em competition?  There’s nearly $1,000 at stake and yearly bragging rights.  Even against a points spread and nearly 50 competitors, I’ve won the grand prize several times over the past ten years.  This year, I’m in second place by just 2 games, and there’s one weekend of betting left.  Will USC cover against UCLA?  Will FL cover against the Tide?  These are the questions that will determine how good my kids’ Christmas is.

f.  Am I bettering myself?  Broad, I know, but stagnant water stinks, so I don’t want to be stagnant.  Am I traveling?  Exercising?  Telling stories?  Broadening my horizons by what I read, watch, and hear?  Avoiding getting arrested?  2008 has been a great year by these standards.  But the 1990s?  Not so much.

The manward is supposed to go to 6 bloggers, but I’ll pick one again:  SciFi Dad. Why? Because he recently analyzed his blog, which likely meant using a tape measure; he completed NaBloPoMo last month, and he helped me with my redesign over Thanksgiving break when my feed wasn’t doing jack shit, and I was avoiding everyone.  Dude totally saved my relationship with the in-laws.