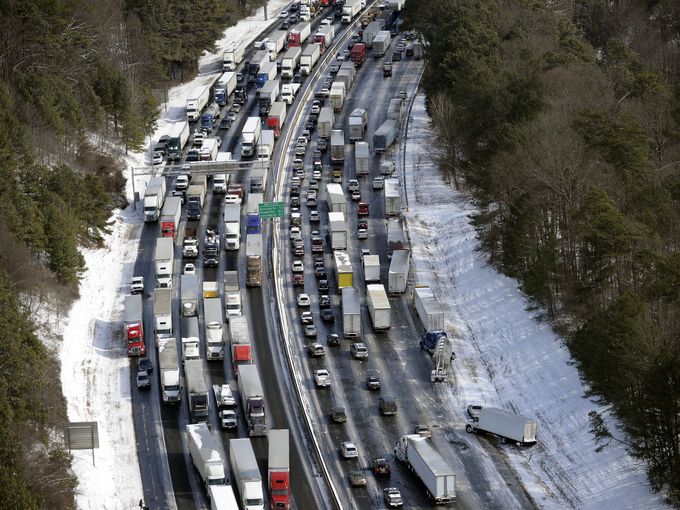 As you may have heard in the news, Atlanta had a bit of snow yesterday about lunch time.  I had to see my allergist that morning and saw the flakes in Cobb County, just north of the city.  I was excited.  When I arrived at my office in Buckhead, there were merely flurries.

Half an hour later, the snow was coming down for real.  A few of us ate lunch in our conference room like we do almost every day, and a few others walked to Tin Lizzy’s for lunch and drinks. My work wife and I decided the work day was over; his paralegal and our shared bilingual case manager headed home.  My head paralegal and I decided to get some work done for a bit.  I looked outside my window. 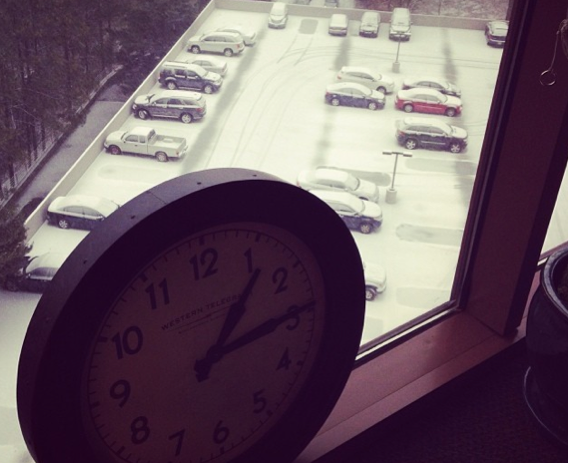 The parking lot was getting whiter, and the number of cars was getting smaller.  I decided to join the group at Tin Lizzy’s and started walking out the parking garage.  Every level of the garage was so backed up with cars trying to leave that I would not have even been able to back my car out of its spot, much less drive anywhere.  I then knew going to a bar was the right decision.  I texted my para and suggested she do the same in lieu of trying to head home. 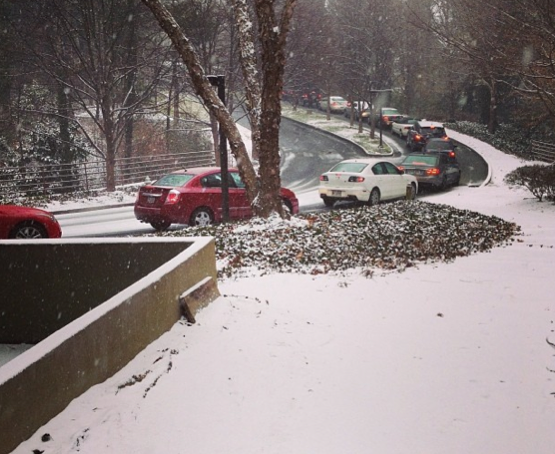 The bar was empty except for two tables of patrons; one was my 3 suitemates.  I promptly had 2 margaritas to catch up.  Then we got shots of tequila. 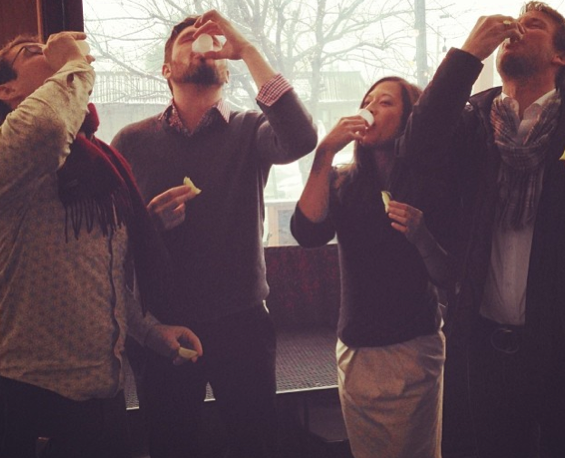 I began to give nary a damn about the traffic surrounding us in Atlanta.  We ordered more pitchers; we were joined by 3 others from our suite; we ordered more pitchers.  At 1:52pm, my cell rang, and an automated voice told me Fulton County schools would let out that day at 1:45pm–7 minutes ago.  I knew traffic was about to go to complete shit.  Our server came by and told us they were closing early, so we walked back to the office.

Lucky for us, our office is full of alcohol, left over Halloween costumes, sports equipment, and a “can do” attitude.  We set up a tailgate party in the parking lot with my work wife’s Range Rover.  I didn’t have a suitable jacket, but I did have an animated furry dog costume. 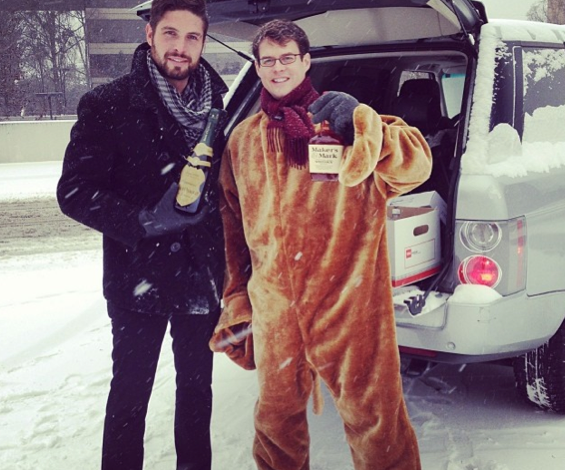 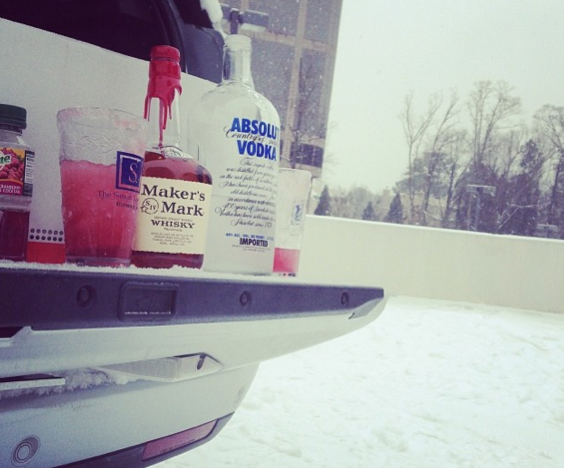 A used trial exhibit became a surf board, and a Storm Trooper mask became a safety helmet because, after all, we’re injury lawyers.  Safety matters. 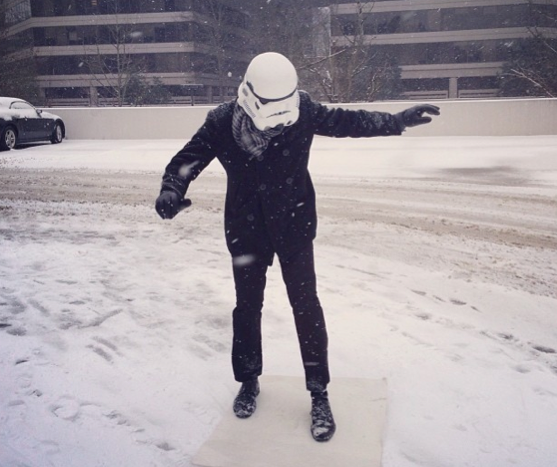 Snow storms are great for core workouts.  As long as a safety helmet is used. 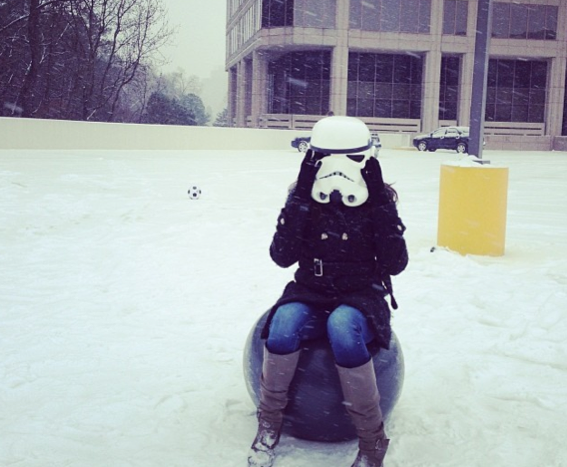 Know what goes well with Maker’s Mark?  Snow!  I called this drink a “January.” 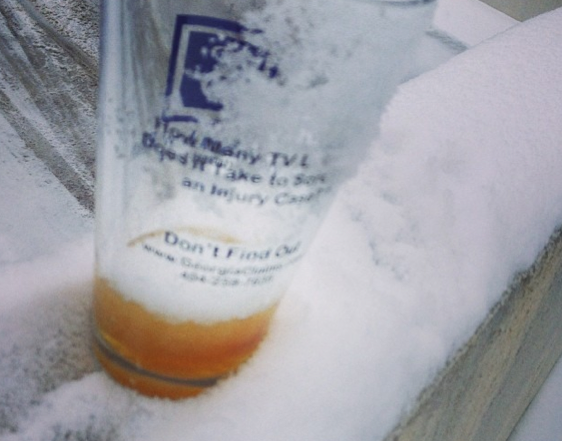 About 5:30pm, the party came to an end, as we were satisfied that our building’s entire parking deck was now empty.  We broke camp, and everyone headed out into the storm.

I had decided (after checking the traffic maps on my phone) that I would spend the night at my office, but my bride seemed to think I could (and should) make it home.  I drank some water and debated whether to try and drive home in the snow after an afternoon of tequila and bourbon consumption.  My paralegal was still in the office and decided she’d brave the roads; I followed a few minutes later.  It was 6:15pm.*

I took back roads (Land O Lakes Drive) for the first 5 minutes but then needed to drive 1/8 mile on a pretty busy 4-lane, Roswell Road, to get to Interlochen.  It was miserable.  A mail man had abandoned his vehicle in the right lane; the left lane was at a standstill, and the lanes going the opposite direction were full of cars spinning out and into the shoulder/ditch while trying to go up the hill my lane was going down.  I sat for 15 minutes or so texting my wife and telling her this was not going to happen.  I pulled a U-turn, went around the skidding cars like I was running a slalom course, and turned onto a residential back road (Laurel Forrest Circle), using the Waze app.  My goal was to wind through as many discreet residential streets as possible.

I came out on Lake Forrest by Chastain Park, passed a bunch of sedans going 5 mph, and got north of the park, turned left on West Wieuca, turned right on Dudley, and continued through residential streets up to Powers Ferry.  I crossed Mt Paran and slammed on the breaks.  Cars everywhere:  sideways, backwards…it was a clusterfuck.  I did another U-turn, went right on Mt Paran, was about to turn on Rebel Trail when a local resident was blocking it with cones (it’s very hilly and curvy).  I took Jett, headed north, went right on Crest Valley, crossed Powers Ferry (which was gridlock), and came to Mt Vernon Pkwy.  I went around a curve and then saw several cars stopped on the side of the road, so I went around them.  A sedan was headed down a huge hill toward us; a Ford F150 was waiting to go up.  I pulled up behind him.

The car coming down pulled off to his right, and the F150 took off up the hill; I followed right behind.  He stopped halfway up and began skidding…then he put it in reverse, so I had to as well.  We both went down the hill to the bottom, and he pulled up beside me.

Him:  Quit following me!  I need to get some speed up to get up the hill.  You’re making me nervous!
Me:  Sorry…I struggle with patience.  And, I thought you had it.
Him:  You got 4 wheel drive?
Me:  I have all wheel drive.
Him:  Well, you’re ahead of me now.  You try it.

So I floored it (after a quick prayer).  Both sides of the street were lined with residents–dads with their sons in their front yards, commuters who’d given up driving and pulled to either side of the road, and gawkers.  As my diesel X5 hummed up the hill, they cheered and encouraged me.  I pushed the gear shift into “manual” and continued in M2 gear.  A yellow light started to flash on the dashboard, but I was afraid to look down and see what it was; I kept accelerating up the enormous hill…

A minute or two later, I was at the top.  I’d made it.  The onlookers cheered as I pulled away, turned right on Mt Vernon Hwy, and made my way through the last 1.5 miles to our house.  I arrived just after 7pm:  45 minutes to drive what’s usually a 15 minute commute (although it was more meandering this time) on a night when Facebook told me folks were spending 4, 5, 6, even 12+ hours to drive home from work or school.  I had won the Atlanta snow/traffic debacle from Hell, and it felt damned good.

I even had time to hug the children before bed.

*The reason I included a fairly detailed account of how I went from my Buckhead law office to Sandy Springs in under an hour is because everyone I’ve told about my commute time has asked how in the Hell I did that, saying it’s the fastest/easiest drive home at that time anyone has heard from last night!  I’d like to thank God, German engineering, Maker’s Mark, and the Academy (in that order).