As I’ve referenced a few times this summer, I’ve spent pretty much this entire year sick when inside our house.  My issues even made the screen of another blogger who referenced praying for me (which I thought was very kind)!  Despite thousands of dollars demolishing walls in the basement, Owen’s bedroom, our master bath, and the kids’ bathroom in “search and destroy” attempts at eradicating mildew, replacing drywall, and installing a new air conditioning condenser, the symptoms continued.  For most of this year, I looked forward to July, when I knew I’d be traveling all but one week.  I hated being in our house, which made me a bit of an asshole to be around.

During the 4th of July week while at my in-laws’ lake house, something I’d never had happened before occurred–the sneezing and cold symptoms turned to an inability to breathe.  Around 3am at night, I awoke, unable to inhale without great labor and wheezing.  The next day, we went to an urgent care clinic, and an RN from rural Alabama shoved a needle in my ass that had me limping for two days.  She gave me a steroid shot, too!  I was convinced that my in-laws’ house had mildew; that was the issue.

Then I went to Spain and north Alabama and New Hampshire and New York and came back home, thinking I’d be better, but the asthma symptoms continued.  Finally, after 6 months of illness and several weeks of utter misery, I called a doctor.  I hadn’t wanted to call a doctor, because calling a doctor means resigning.  I didn’t want to admit that, for the first time in my life, something was badly wrong with my health and that I needed help getting over it.

The other reason I didn’t want to seek medical care was a response I got from several friends I told about the issue:  sometimes when one is approaching 40 years old, one develops allergies.  I didn’t want to be “approaching 40,” and I sure as hell didn’t want to be one of those people with allergies.  Paul Pfeiffer, from my favorite TV show, was “allergic to everything,” per the narrator in the first episode.  I can’t be Paul Pfeiffer!  He was a pussy, whereas I once set a record for pull-ups at my undergrad’s ROTC detachment.  I was certain Paul couldn’t do pull-ups.

But the worse aspect of resigning to needing medical attention was this:  I wasn’t allowed to take an antihistamine for 7 days while I awaited my allergy tests.  After the incident at the lake, I’d made friends with Zyrtec and Claritin.  Now we had to break up.

So, I went 7 days with no meds.  Every night, I’d cough and gasp until I’d awake and grab the inhaler they gave me in Alabama to breathe.  I’d have a little pile of Kleenexes to the side of the bed every night where my nose would drip onto the floor.  My nostrils bled.  My voice sounded gravely.  People told me I looked tired every day at work and that I sounded awful.  I told them they were ugly and at least I would see a doctor in a few days for my issues.

The day came, and I saw the allergist.  I lay down and got 50 little subcutaneous needles showed into my back with itty bitty allergens in each.  I thought the exercise stupid.  I knew I was allergic to mildew and that we’d have to keep ripping out drywall in the house and trying to keep water out of the basement.  It would be my cross for the foreseeable future.

The doctor came back.

Me:  Mildew?
Him:  Nope.
Me:  That can’t be right.  I’ve always sneezed a bunch if a basement had mildew.  I think you’re wrong.
Him:  It didn’t come up!  You’re showing traces of allergies to some grasses, dogs, cats, and dust mites.
Me:  I’ve never had a problem in the grass or with my dog.  And dust mites?  What the f…heck?

I took a breathing test that comes back at the “60 years old and smokes 2 packs per day” level, so I got some kind of nebulizing treatment thing. 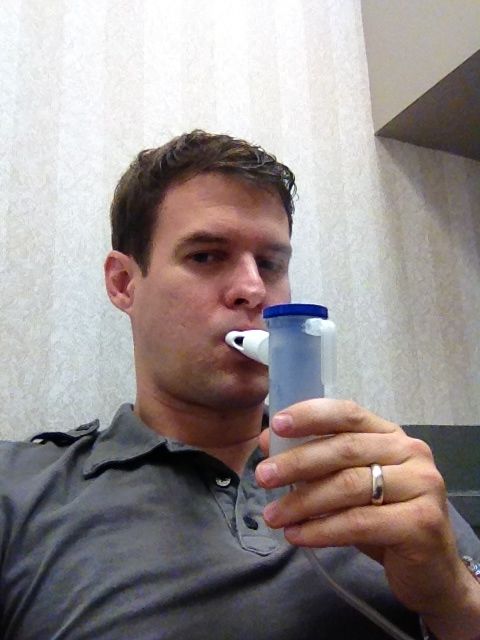 That’s the face of happiness right there.

I left with all sorts of pretty boxes full of pills, sprays, and inhalers: 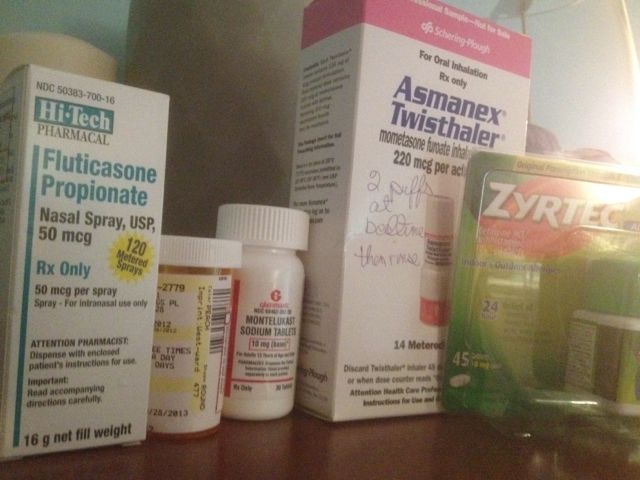 And, for the first time, in my life, I became one of those people who has to take pills every day.  Like Elvis.

I took the pills each day with no improvement.  I bought an air filter for the bedroom and wrapped our mattress, box springs, and pillows in plastic stuff that keeps out dust. 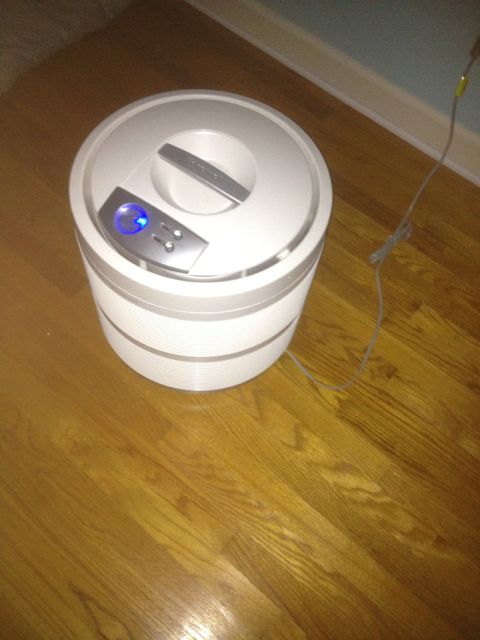 I left this thing running all Labor Day weekend while the house was empty.  I flew to Dallas to see the ‘Bama-Michigan game.  I felt good for the first time in months, but I kept taking the pills.

On Monday as we boarded the plane home, I got depressed over the thought of going back into our house again and resuming the misery.  I could barely muster pleasantness when reunited with the children, as I knew as soon as I enter our bedroom, the hell would return.  We got home around 8pm; I helped put the kids to bed, unpacked, and lay down in the bed to wait for the misery to return.  I woke up 8 to 10 times that night, tossing in the bed with anxiety about going back to night after night of unexplained and unlimited discomfort in my house and bed.

I got up at 6:30am on Tuesday.  And for the first morning in months, I felt fine in my bedroom.  I could inhale.  I took a deep breath to see if I’d cough, but I didn’t.  I was so excited that I got to work 3o minutes early.

Last night, I mentioned to a nurse friend my not wanting to stay on these pills any more, since clearly the air filter or mattress cover or being in hot/dry Texas had cured me!  She suggested I write down what I went through before today and that I keep following the doctor’s orders.  So that’s what I’ve done.  But it doesn’t mean I’m resigning myself to a lifetime of “having allergies” or being “on medication” or any of that other pussy stuff.  I’m just….rebuilding.