That damned South Carolinian, Bennie, sent this meme requiring an immediate self-aimed picture, but I ain’t playing.  I’m supposed to pass it to 10 folks, but in looking over the acrimonious response he got from the female bloggers he tagged, I’d rather not.  So, I’ll make it voluntary.  If you’re a cool kid who sat in the back seat of the school bus and screamed obscenities out the slide-down windows at the pretty girls who’d just disembarked, feel free to play along.  Otherwise, continue being a pussyboy and sit near the driver.

I also learned I’ve received some love from Brian, aka Unfinished Rambler:

I’m not sure what this means, but I think it means Brian and I are BOTH HIV FREE!  Hooray!  For that, I’m grateful beyond dollars.

And finally, I bring you a picture I’ve wanted to take for the last several years every time I drive from Atlanta to Guntersville, via Attalla, Alabama: 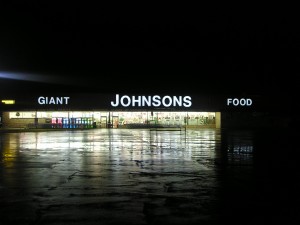 You can’t see it, but there’s a little asterisk at the bottom of this store’s signage.  Next to it are the words “credit goes to Father Muskrat for allowing his alias to grace our storefront.  Were it not for his giant johnson, we’d be called ‘Fred’s’ or ‘Piggly Wiggly’ or something equally craptastic.  He is, dear shoppers, the original Giant Johnson.  Thank you.” 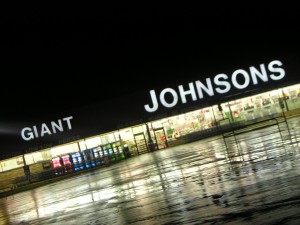 Honest.  It says just that.  And you’re welcome.