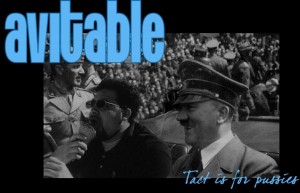 A short time ago, I volunteered to allow the foul, but frequently brilliant, Avitable to interview me.  Here are the results:

First of all, the RAP is, arguably, the most difficult concept one must grasp to pass the Multistate Bar Exam.  The California Supreme Court even excused an attorney’s improper application of the RAP when drafting a will.  That being said, I can easily explain it in sexual terms as follows:  if your will, trust, or estate has any semblance of complication to it at all, hire a good attorney to prepare it, lest you get sodomized by the probate court, raped by estate taxes, and bitch slapped by your heirs.  Should you ignore said admonition, make damned sure your interest doesn’t vest, if at all, any later than 21 years (or the amount of time since anyone saw Avitable’s naughty bits) after unprotected intercourse or botched contraception taking place at the time of the interest’s creation.

2. Can you defend NASCAR as something more than people driving really fast in a circle?

Of course I can.  What is NASCAR?  It’s a warm Sunday afternoon with 200,000 friends.  It’s a soft-sided cooler full of domestic beer cans and ice, just within the size restrictions allowing its placement under your seat.  It’s the ferocious roar of forty muffler-free engines.  It’s the the smell of evaporated fuel and burned rubber.  It’s raw speed:  200mph, a few feet from where you’re standing.  It’s an infield full of free mammograms, moonshine, and marijuana.  It’s recycled school buses painted black with a #3 on their sides, haloed with “Rest in Peace, Dale.”  It’s rubbin’ and bumpin’ and shovin’.  It’s an inability to understand the winner during the post-race interview if you’re not from West Virginia.  It’s having an attorney, an entrepreneur, a pilot, a welder, and a carpenter finding common ground for three hours.  It’s calling your best friend from college during the initial lap, holding up your cellphone towards the pacing cars, and screaming, “Too bad you were a pussy this year and didn’t make it to ‘dega!”

3. As you know, all lawyers are assholes and litigators are the worst offenders. Shouldn’t we just dispense with the legal system as it is?

And do what?  Trust people to tell the truth?  Trust people to only request insurance monies when they’ve actually had a disaster destroy their homes or been fired improperly or injured themselves at work or used a mass-produced product with injuring defects?  It wouldn’t work.  Most people will tell whatever story will get them the money they covet; perjury and its resultant contempt doesn’t deter any more.  Everyone wants something for nothing and will lie to get it.  Having an advocate for both sides who’s supposed to be bound by rules of ethics and evidence is the best way to get at the truth.  Is it perfect?  Of course not.

That being said, I wish we could have professional juries who aren’t swayed by emotions or racial preferences.  There’d be public outcry about the need for a jury “of your peers,” but that’s not what the Sixth Amendment guarantees.

Incidentally, I revel in being called an asshole by opposing counsel.  It’s happened a few times this year–once last week.  I didn’t respond; I just hung up.

As much as I’d like to choose the last one, I had to look her up to find out who she was, so, no fair picking her.  I gotta say power suit.  Even though it’s meant repeated questions about my sexual preference, I love wearing a quality suit.  My charcoal Boss suit with crimson Golden Fleece tie is undefeated in court.

5. Do you think this is an STD or did I just get friction burn on my dick?

For all your faults, I know you love your wife, so I’m going to go with friction.  Since she practices law, I’m sure you there’s a  good bit of alone time for poor Avitable.  Here’s a novel idea:  lube?

Want to be part of it? Follow these instructions:
1. Leave me a comment saying, “Interview me.”
2. I will respond by emailing you five questions. I get to pick the questions.
3. You will update your blog with the answers to the questions.
4. You will include this explanation and an offer to interview someone else in the same post.
5. When others comment asking to be interviewed, you will ask them five questions.