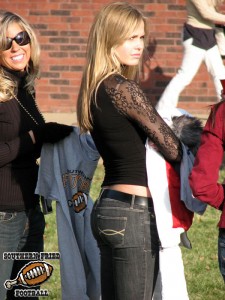 I got tagged by Paper Cages to list seven random things.  Seven random facts.  But unless you’ve been wearing sunglasses and doing heroin the last few days, you know I don’t follow rules associated with memes I receive.  I’ll instead list seven random whores and their aggressive approaches.

1)  Random Girl Who Showed Up At My Fraternity House to Smoke Pot.  You were short with short blond hair.  You walked into the side door.  I was in Room 3 and had the door open.  You asked if John was there.  I told you he wasn’t.  I asked if I could help you with something.  You asked if you could just sit in my room to wait for him and then pulled out a pipe and some weed.  I watched as you packed, lit, and puffed.  You leaned in to try and kiss me as my roommate walked in with a “Whoa!”

2) Alpha Gamma Delta Upperclassman Whom I Met During the Ice Storm.  You were at the Purple Phische when “Click” showed up to play on late notice after classes were canceled due to a snow and ice storm.  We danced to the all-black band playing soul music covers.  You asked me to walk you back to your sorority house; on the way, you slipped on an ice patch, bringing me down with you.  While we sat cold and wet-assed in the thin layer of snow, you made your move.

3) Elementary School Teacher Six Years My Senior Whom I Met on New Year’s Eve.  You didn’t know I used an ID saying I was born in 1969 to get into 328 Performance Hall in Nashville for Mel and the Party Hats; you just figured I really was 25 instead of 19.  After you attacked me at midnight, I appreciated your paying for the cab ride back to your Goodlettsville apartment, right up until when the driver asked if you were going to “make that young man a man tonight” and you replied that “no, he’s going to stay on the sofa after we get something to eat.”  I hope you weren’t too offended when I asked him to pull over and let me out.

4) Chattanooga Nurse Who Greeted Me By Asking if I Was Gay.  I did look good in the navy pinstripe Brooks Brothers suit, powder blue shirt, and navy tie I’d picked up in Venice the previous summer, but I never could have anticipated I’d leave Andy’s wedding reception, go to a bar, and have a local introduce herself with, “There’s no way a straight guy comes out here dressed that well.  I wanna see if you’re gay or not!” before kissing me.  What was your name again?  Dana?  I think that’s right.

5) Cousin of the Groom at a Wedding In Marianna, Florida.  I had stitches in my forehead from passing out after my yellow fever shot during my first drill weekend with the Air National Guard.  My friends kidded me about looking like Frankenstein.  Yet, when I walked out of the bathroom by the swimming pool behind the hotel where everyone was staying after the reception, all who’d been there having cocktails were gone.  Except you.  You walked up to me, kissed me, and then jumped into the pool.  You ignored the lights lining the outer edge of the pool liner and failed to notice the blinds open in one of the overlooking rooms, followed by another, and another, and another, until most all of the groom’s side of the family was watching you.

6) Island Equestrian at Brogen’s When I Was Trying to Learn the Law.  I was at St. Simon’s Island for a conference, and you asked me to act like I was your boyfriend so that Frank Kerns would stop hitting on you.  You didn’t know I’d just deposed his client the week before and that he knew I was from Atlanta, not the island, when you kissed me and acted like we’d known each other for years.  He stepped back, but the bar was full of lawyers I either worked for, against, or with.  And all were watching the young blond and their colleague on the bar stools closest to the video poker machine.  I enjoyed flounder with your parents on their rooftop deck overlooking the Atlantic later that night, but I had a lot of explaining to do when cross-examined the next morning by the partner for whom I worked.

7) Future Medical Student Who Made Me Feel Like Wooderson.  You were my little brother’s girlfriend’s sorority sister.  I was working for IBM but still drove to Tuscaloosa every weekend for football games and stayed at the old fraternity house.  The four of us watched the Ole Miss game together before going to the house, where we two sat in the study room until Jim Bob walked in to tell me it was time to get up and head to Talladega for the NASCAR race at 4am.  I took my sleepless, blue-balled self to the race, stood in the aisle, and clutched the handrail by the chain link fence keeping me from 40 cars going 200mph through the backstretch, my body whipping in the wind like one of those inflatable gumby-looking figures outside used car lots each time Dale Earnhardt and his pursuers would pass, smearing Philly cheese steak all over my face and beer down my shirt, while my companions pointed and laughed from the bleachers above, calling me “miserable looking!”

So there they are.  Seven random whores and my brief interaction with them.  Should I tag someone else for this meme?  Sure.  I think Acorn King would be a great candidate for such an exercise.