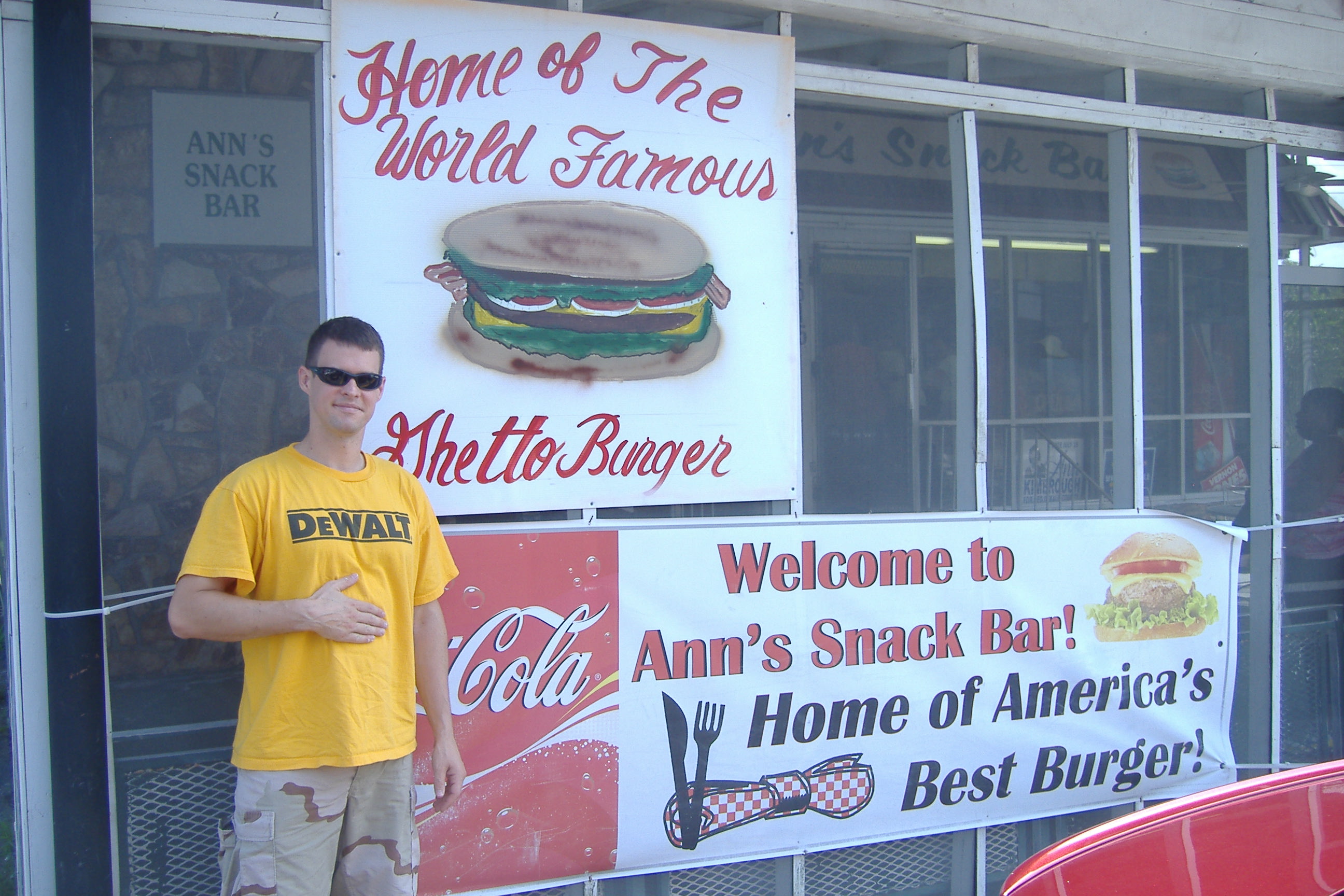 My favorite age: 17.  I had a new car I’d bought with scholarship money, a bedroom window only a few feet above the ground, and the belief that I knew, and could accomplish, anything.

My celebrity crush: The lead singer of Poison, until I learned Bret was a man.  Also, whoever’s featured each month in Esquire.

My defining characteristic: My uncanny ability to turn innocuous banter into the highly inappropriate, usually at family meals.  I can also turn any conversation into dialogue from a 1980s movie.

My most evil moment: Taking a crap in a hotel sauna on a family vacation somewhere in Colorado.

My favorite food: BBQ (in Atlanta, I recommend Fat Matt’s, Daddy D’z, 5th Street, or Harold’s).  The “ghetto burger” at Ann’s, too.

My grossest injury: The emotional scars from seeing and hearing soldiers get hit with mortars in Iraq.

My biggest hatred: Our nation’s gradual move towards Marxism, while I’m forced to finance and defend it.

My most illegal activity: I’ve been arrested 4 times and pulled over at least 20 times; I actually got away with stealing several road signs once by slamming my dorm’s fire escape door in a pursuing police officer’s face.  Most illegal, though, would have to be driving from midtown to Decatur (7 miles) drunk, clipping an oncoming car, turning off my lights, and continuing home in “stealth mode.”

My need for justice: If you lie to me and I can prove it, I won’t settle your case, no matter how much it makes sense financially.  We’ll go to trial, you’ll lose, and you’ll look like a jackass in front of the Judge.

Also, if you own a pit bull that has attacked two smaller dogs in our neighborhood, and you’ve refused to keep it chained or fenced, I may know who killed your animal.

My most knowledgeable field: Grammar, GA insurance law, and lyrics to all Poison or Wham! songs.

My mother’s influence: I make my bed every morning and use possessive pronouns in front of gerunds.

My nerdiest point: In the 4th grade, when Emily Coke, the girl I’d wanted for the previous two years, told me via an intermediary that she could never “go steady” with a “total, total nerd.”  Not just a “total” nerd, but “total, total.”  Just because my I had yet to make my first “B,” wore Bob Griese glasses, and was shorter than all the girls in my class DID NOT make me a nerd.  She had NO IDEA what kind of Dirk Diggler talent I had hidden behind those camouflaged trousers.

My perfect date: When I was single, I just wanted to find someone with whom I’d want to stay up til sunrise talking.  Now, it’d have to be Valentine’s Day in Paris (See 2/14/08).

My unanswered question: How will our government fund its promises?  Are we in an unavoidable decline?

My random fact: The only television I watch is Alabama football.  I cancel cable after the bowl games end and then have it reinstalled in mid-August the following year.  I think if you have a TV in your bedroom, you’re asking for a shit marriage.

My stupidest decision: Building a house before selling the one in which we live.  Oh, and I wrote an angry and threatening email to a managing partner at my old law firm about their treatment of me after returning from OIF; there were citations to USERRA and everything.  And dating another attorney with whom I worked.  I’ve made many bad decisions.

My favorite television show: I stopped watching on May 12, 1993 when “The Wonder Years” ended.

My style of underwear: Under Armour boxer briefs.

My weakest trait: Kryptonite.  I guess that’s more of a rock, though.  I could easily slide into alcoholism.

My X-men power: Wearing nothing but blue body paint.  You should’ve seen me at Dragon*Con!

My strongest yearning: In 25 years to NOT wonder what the Hell we were thinking bringing new life into this world.  And if hindsight reveals that a mistake has been made, to have a flux capacitor in my car.

My moment of Zen: After a run, pour a Makers on the rocks, play some music, and type.

————————–
Props to Avitable, originator of this enlightening exercise.  Other witty bloggers are found at humour blogs!