Thursday of last week, I looked at my planner for this week and realized I had nary a deposition or hearing all week!  We were already going to Montgomery for some speaking engagement my bride had committed to a long time ago, but we’d planned to come back Saturday evening when it finished.  Instead, I thought and suggested the following:

Me:  Hey, why don’t we go to the lake for a few days instead of home Saturday?  It’s spring break; all my opposing counsel appear to be out of town, as I have nothing on my schedule for the first time in 3 years.
Her:  I’ll ask my mom if we can occupy her lake house…sounds fun!

We were nearly to Maddie and Owen’s preschool on Friday when I learned we’d committed to keep the class parakeets for the week.  So, the Odyssey’s back row had 2 carseats and a surly 16-year-old in the middle, while the middle row had one carseat and a large birdcage in its two seats.  The dog lay between the two seats and diligently watched the birds.

As big a pain in the ass as it was to load all these creatures and their belongings in and out of the car in Montgomery and again at Lake Martin before doing it again at my Tuesday afternoon haircut appointment, the rest and relaxation gained from a few days away were worth it.  See for yourself:

Baby Lola at a park.  She’s an excellent driver. 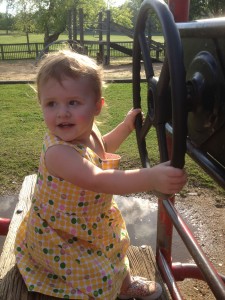 See the woman on the deck on her laptop?  That’s how self-employed people “vacation.” 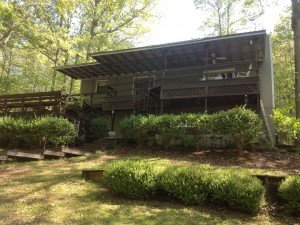 Maddie mothers Lola whilst Owen checks the structural integrity of the landscape timbers as seating. 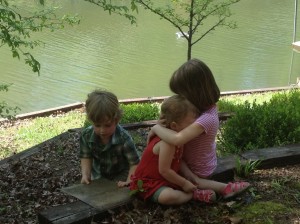 “I’m the stranger.  Killing an Arab.” 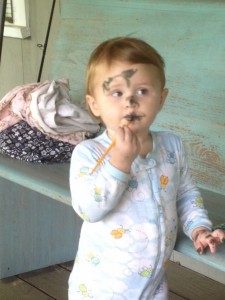 And on the fifth day, we came home to a dumpster full of formerly covered-in-black-mold pieces of our basement.  Hooray! 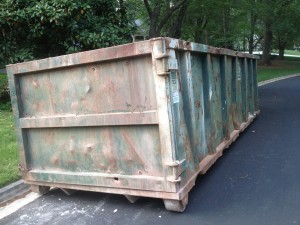 At least I was able to open the garage door from over 100 miles away with my handy LiftMaster garage door iphone app.  I certainly didn’t want to be there for the demolition.

In other news, tomorrow’s my 3-year soloversary.  I usually do some triumphant post every year on the anniversary of quitting my job to start my own gig, and I may do that next week if the inspiration hits me, but here are the past couple of years’ posts.  I’m going to celebrate by taking the children to see Clifford the large red dog at a local museum, because there’s no way in hell I could leave for half the day to hang out with a giant red dog when I worked for other people.