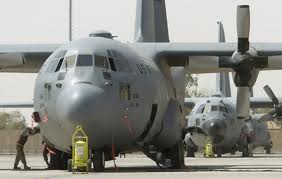 I walk across a parking lot and see a Lieutenant Colonel and a Captain walking out of the building I’m about to enter.  The Captain looks familiar.  I stop to stare.  They walk past me; I start stepping toward the automatic doors a few yards ahead, but I stop myself.

But he didn’t cut that shit out.  How could he?

The last time I saw Joe was on a runway at Balad Air Base in Iraq.  It was May 2003.  I’d arrived a few weeks prior (May 8 to be precise) after spending a few months with Joe and several others in Kuwait City at a place called Camp Wolf.  He was on the back of a C-130 about to receive several wounded Army soldiers.  I was there to carry them off the ambulances and onto the plane.  The bird was loaded and about to head back to Kuwait, and Joe asked the following, after seeing me again for the first time since I’d left the purgatory that was Camp Wolf in Kuwait for the Hell that was Camp Anaconda in Iraq:

Him:  Is there anything you need–anything we can maybe send up to make things a little bit better for you guys up here?
Me:  Yeah.  MRE’s and bottled water.
Him:  Are you fucking kidding me?  They aren’t even feeding you?
Me:  The Army is having to ration food, so we have to stretch 1-2 MRE’s to cover 3 meals.  Water is from the Tigris…it’s put into tanks with some bleach and iodine or some shit in it.  It sucks.
Him:  We got boxes and boxes of both lying around, now that we have DFAC‘s.  I’ll put some on the next bird up.

Joe was good on his word.  Every subsequent C-130 carried cartons of bottled water and boxes of MRE’s.  In fact, we used the boxes to create a divide between our cots in our tent:  our very own “wall of water, ” we called it.  It was clean, and it was room temperature (which was better than the 100+ degree water I was used to drinking).

I never got to thank him in person, but I always made sure whoever was on the back of the planes I saw the subsequent weeks and months knew to tell him how much we appreciated his efforts.

On November 11, 2003, we were both home, and he called.  I didn’t recognize the number and let it go to voicemail.

Him:  Hey, happy Veteran’s Day, man.  Glad you made it back home. Hope to see you again sometime stateside.

I found out he’d served at a couple different bases since 2003, gone to college, gotten a commission, return to school a couple more times for a Masters and PhD, and now lives in Tampa but drills where I do in Georgia.  We exchanged cell numbers and agreed to meet for lunch next month after catching up a bit in the parking lot.