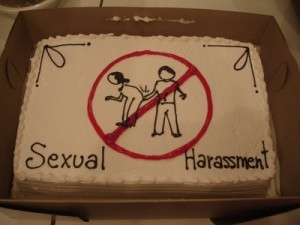 Today, a client was deposed in a sexual harassment case.  The defense attorney is named Ray.  Ray is a good bit older than I am.

Here are some excerpts from the exchanges:

Ray:  Look – I am neutral here.  My job is only to find out the facts about what you say happened – good, bad, and ugly.  This isn’t formal.  I have no dog in this fight.
Me:  Ray, who is paying you to be here?
Ray:  Well, the company is but I’m still neutral.
Me:  If this goes to litigation, who is representing them, then?
Ray:  Me.
Me:  Okay.  I’m cool with your asking her questions, but let’s refrain from telling her you’re neutral.
Ray:  Ok.  Ok.  Ok.  I mean, ok!  Can I still interview her?
Me (channeling Rocky Balboa to Clubber Lang):  Go for it.

And so it began.  Then, we got to some of the issues leading up to the harassment.

After we sorted out what urban lingo like “hit me on Facebook” meant, we learned of the defendant’s habits in the bathroom.

Client:  He also told everyone he was on a laxative called “Smooth Move” to lose weight.  He told me he took his daily blow-outs at the BP near work, and he would call the BP just before he needed to have a movement, ask to speak to the manager, and tell the manager, “Hey I was just there, and your bathrooms are a wreck!”  That way they’d be nice and clean, and he could relax in comfort with a magazine and–let me quote him directly–“SHIT.  IT.  OUUUUUT!”
Ray:  Now, none of this sounds like it’s sexual…
Client:  Well you haven’t let me get to the part where he told me he’d fuck me so hard I’d leave my husband.
Ray:  Anything else specific?
Client:  He also told me that if I’d let him get with me he’d hurt me.
Ray:  Now, did you take this to mean that he was talking about the size of his…. um….. manhood?
Client:  Well, I think he was being sexual when he told me his dick was so big he’d split me in half.
Me:  I’m not claiming to be an expert, but I’d categorize that as “sexual” in nature.

Then we discussed whether this fine gentleman bothered anyone else at the workplace.

Ray:  Was there anyone else whom he harassed or targeted, so to speak?
Client:  Yeah.  Marta.  She’s Cuban, but he calls her “Mexico” for some damned reason.
Ray:  Did you witness any exchanges with Marta?
Client:  Well, I heard him tell Marta that if he fucked her, and they made a baby, the baby would be beautiful because it would have good hair and be light-skinned.
Ray:  Do you think he said that, implying that a Mexican and black mixed race child would have attributes from both races and therefore would have lighter skin and straighter hair than someone with two black parents?
Client:  No, I think he was more implying he wanted Marta and him to have sex.

Don’t you wish you got to hear such playful banter at your place of employment?