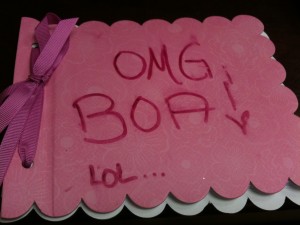 Until today, I thought “Legally Blonde” was a comedy, not a film designed for inspiration.  But a new client came into my office with the above hand-made photo album to be used as evidence in her trial.

Then she pulled this out of her bag: 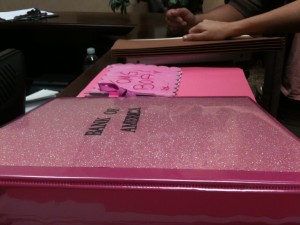 If that appears to you to be a pink 3-ring binder covered in glitter, then your perception is accurate! 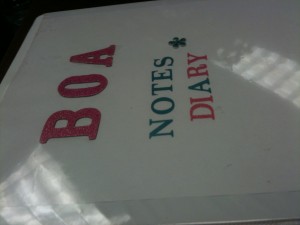 And if this appears to be puffy sticker letters on a 3-ring binder containing reports intended to put into evidence, then appearances can be trusted here!

After Ms. Woods removed all of these items from her handbag without even a hint of irony, she noticed my face.

Her:  Oh.  Um, I really like pink. Hee hee!
Me:  I can see that.  But here’s the thing.  The judge who’s likely going to be assigned this case?  Is gay.  Just did one of those “It Gets Better” videos and everything.  And you know what was in that video?  How he was beaten up at school every day, and the other kids filled his locker with pink folders, pink trapper keepers, and pads of pink paper while they called him “sissy” and “pussyboy” until he hated the color pink, hated being homosexual, and hated anything that can be called quintessentially feminine.  Like pink.  And glitter.
Her:  *horrified*
Me:  So, you won’t mind if I separate these pictures, notes, and records from their current housing will you?
Her:  *cries*