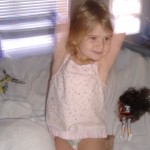 I may have mentioned a conference I attended a while ago called BlogHer and how I stopped drinking for 2 minutes to hit the head at one point and then returned to find that the doll a mom blogger with sons had given me was stolen out from under my BowlHer pictures and name tag.

Well, when I got back, I wrote a letter to the company that manufactured said doll and told them I’d been swag hagged.  A few weeks later, an identical creature arrived with long hair and a bike: 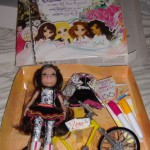 After 15 minutes or so with a blowtorch and a hunting knife, I was able to release her and her bike from the plastic packaging.  I decided to see if Winnie liked it before exposing it to Maddie. 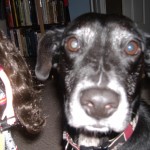 But Winnie cowered.  Despite my reminding her that she’s supposed to be a guard dog.  Pussy dog. 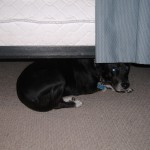 I dressed the doll in the more conservative of the two outfits, went to bed, and figured I’d introduce it to Maddie the next morning when she came into our room at 0630.  Would she enjoy it?  Would it inspire her to do something amazing, like the packaging promised?  Or would she just beat her little brother over the head with it? 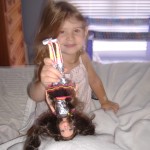 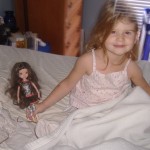 They’ve been like peas and carrots for the past several days.  She named her new doll “Snow White.”  She carries it in the jog stroller as we journey through the ‘hood.

But does it inspire?

When I went upstairs to get her ready for bed tonight, I noticed the orange nightlight was wrapped in cellophane tape and that a nude Barbie doll and pink cellphone were dangling from it before a backdrop of yellow drywall splattered with red Crayola “M’s.”  She called it her “project.”  She beamed.

So… Thanks, Sandra from MGA Entertainment!  Do you paint?  ‘Cause you owe me a clean yellow wall.

*No, I’m not fucking selling out.  I just thought it was nice of these folks to send me a free doll after some whore stole mine.  That’s all.  And it really does make my 3-year-old happy, which means I have more time to for booze and pills.