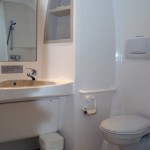 One of my blogging friends  recently wrote about his one year bloggiversary, and I thought, “Hey, I’ll bet my bloggiversary is coming up, too, but it’s been SO DAMNED LONG since I’ve read my blog or anyone else’s that I honestly don’t know.  Was it May or June?” and then I thought I’d break character to write one of those, “Sorry it’s been a while” blog post prefaces like pussyboy bloggers do from time to time, which only creates a big ol’ “Do you think we actually give a shit where you’ve been?” response in my head, often leading to a vitriolic comment reflecting as much.  But, I decided against it.

So far, I must say the best aspect of working for myself is the shitters.  Stay with me here.  Before, I had to walk into a large open restroom with 2 urinals and 2 stalls, and the entrance had a small cave closet just inside the door inhabited by some kind of trollish woman I unaffectionately called the “turd burglar” because of her affinity for interrupting me at that “not so welcomed” time every morning.

Now, I have a door that leads to a series of 4 more doors, and behind each of these 4 doors is MY OWN TOILET AND SINK!  It’s like being in an airplane but with more space and less temptation to sneak in with the top-heavy girl from first class whose ass I’d like to TAX LIKE THE GOVERNMENT.  I love it.  No one barges in or crinkles a newspaper or hammers his blackberry or answers the phone with “Nothing–what are you doing?” when I know good and well that HE’S NOT DOING NOTHING IN THERE–I CAN SMELL OTHERWISE!”

It isn’t autonomy or freedom or peace or uncapped income potential that pleases me these days.  It’s the ability to know that if a tombstone hung over my office space, it’d say “S.I.P.” **

* Tonight’s post sponsored by Woodford Reserve.  Straight. Buy some, and encourage the white trash in Kentucky to pay me for endorsements.