My bride and I flew down early Tuesday morning and boarded our bitchin’ black convertible Camaro at the Miami airport.  My first experience operating a convertible!  It only took, like, 45 minutes to get the top to go down. 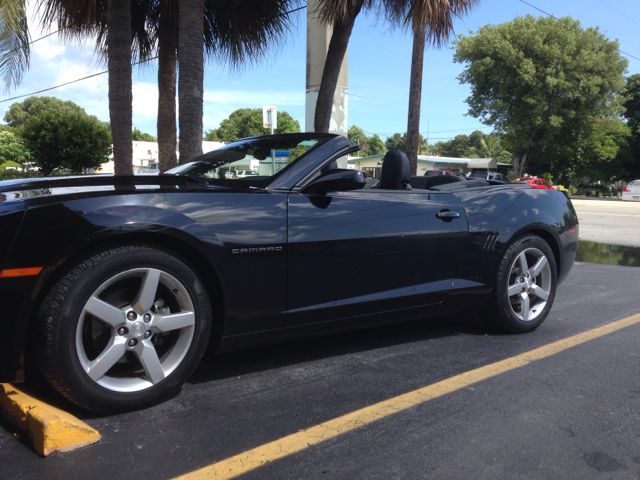 We stopped for lunch at the Key Largo Conch House and started zipping down the highway toward our key.  We checked in, deposited suitcases, and then decided to enjoy the pretty weather and the convertible and go ahead and drive to Key West, about 1.5 hours south of us.  A few seconds after we started driving the 7 Mile Bridge, it started sprinkling.  Of course, this bridge has no shoulder, and stopping isn’t allowed, so I drove faster, figuring the wind would push the rain drops over our bare heads and onto the trunk, but then it started REALLY raining–pouring, even–and we got really, really wet.  As did the car.  The 7 Mile Bridge felt a lot like a 47.5 Mile Bridge when it included blinding sheets of rain pelting our faces and filling the car with water.

Eventually, I could pull over and put the top back up.  We made it to Key West in time to watch the sunset, which is–I hear–the thing one must do in Key West. 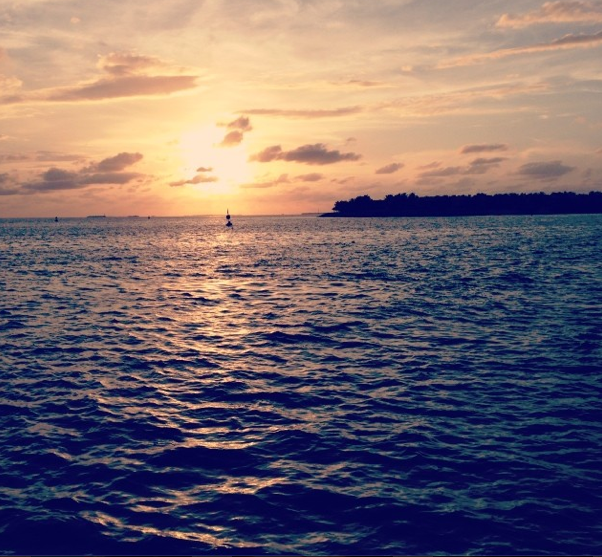 After a delicious dinner at the A & B Lobster House on the water, I insisted on leading us on a bar crawl along Duval Street, which is the other important thing one must do in Key West.  I bought some cigars and settled in at the Bull and Whistle Bar, which had signage indicating smokers were welcome, and was just downstairs from the infamous Garden of Eden, which I wanted to go check out, but my bride insisted this was not a good idea and shot said idea down repeatedly. 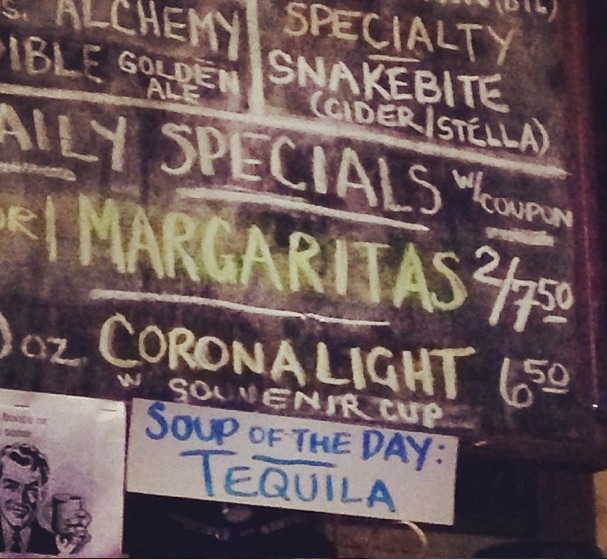 They seem to be known for their soup, so we had A LOT of it. 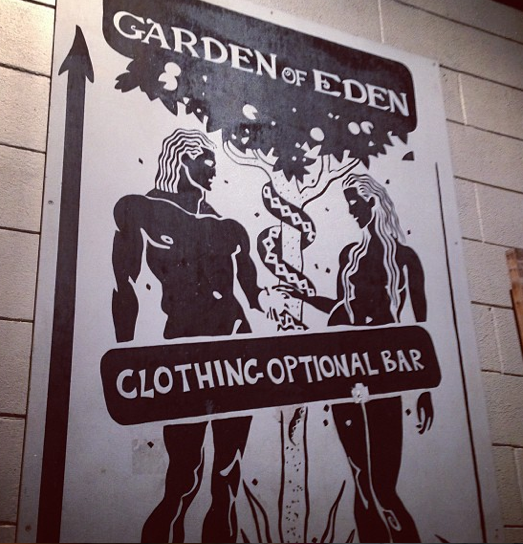 We got back to our hotel at 2am after a drive that could be described both as perilous and beautiful…top down, going from key to key, surrounded by blackness and stars above, with ocean on either side of us (and the occasional small deer).

The next day –our only day that was free of air travel–was one of the most enjoyable days I’ve ever had.  Despite the 4 or so hours of sleep, we were on a boat in wetsuits at 8am for a couple snuba dives. 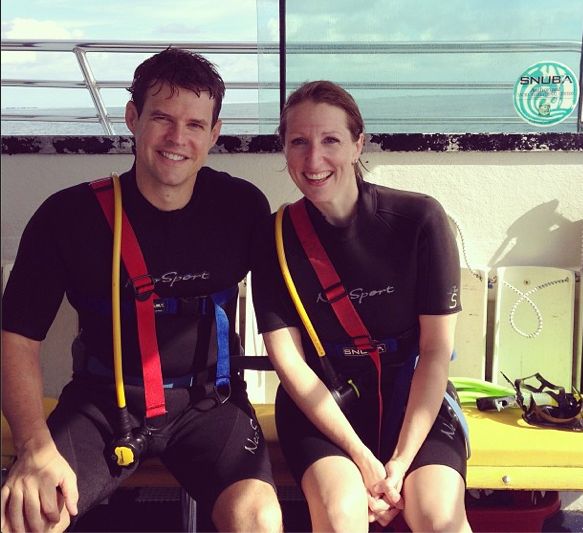 Snuba diving is like SCUBA diving, but the tanks of air are on a floating raft, and the air you breathe comes through tubes that end in the regulator thing that’s in your mouth.  So, you don’t have to be certified–there’s a diver who goes down with you and, presumably, makes sure you don’t drown (and get to see cool stuff).  We went about 25′ down the first dive and saw many colored fish (I think they prefer “tropical” over “colored” these days, but I’m old school), a few nurse sharks, an enormous stingray or two, and a large eel.  None of these creatures tried to stab or eat me, so I call the trip a “win.”  The second dive was on a more shallow reef and also included several fish, but it wasn’t as good as the first one.  Once I got over the “God, I hope this thing doesn’t come out of my mouth, and my children grow up without a dad” feeling, I enjoyed taking in the underwater sights.

After lunch, we participated in the “dolphin encounter” at our hotel, which I’d hoped meant meeting Dan Marino, but it meant this instead: 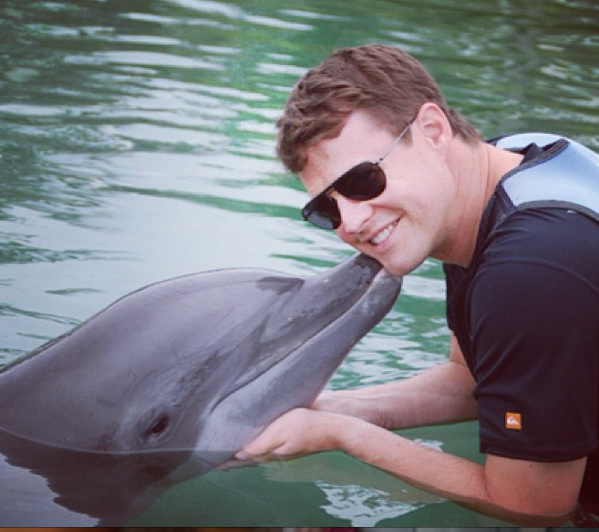 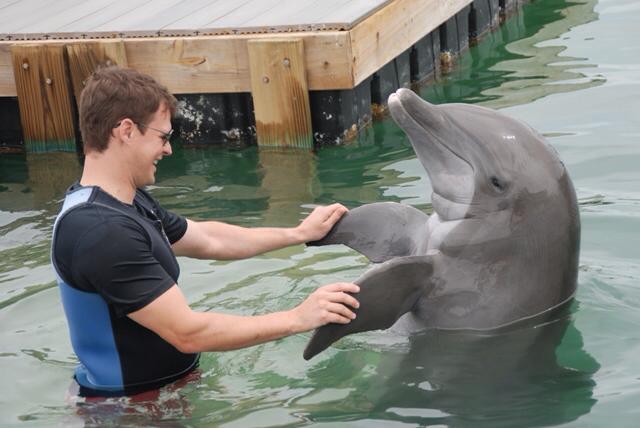 I think he liked me.  At least, he told me he did.  Come to think of it, he never did call me like he said he would.

Then, we rented a wave-runner and traveled through the ocean at speeds exceeding 50mph.  This was my favorite activity of the day (that I can write about, anyway).

That evening, there was a reception with open bar as part of the conference I was attending, and then a bunch of us went to Keys Fisheries, where I had the famous (and quite tasty) Lobster Reuben.  You should try it tomorrow. 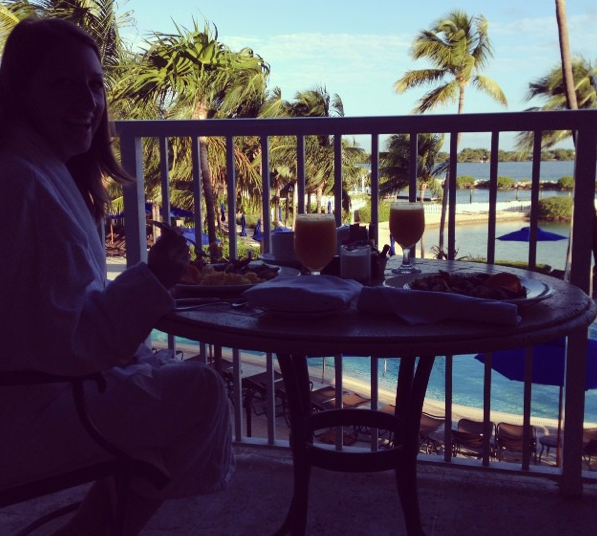 The next morning (after breakfast on the balcony), we kayaked across a calm part of the surrounding ocean and stopped at a bird-filled island, before paddling back to Duck Key and looking at Zillow for house prices on the water listed as “for sale” via my Ziplock bag-protected iphone.   I’m 85% sure that I need a house down there.  It’s going in the 5 year plan (or maybe 10 year).  Or, if I really want to be bold, we could just buy the whole damned island we visited–one of Tom’s Harbor Keys–for $1.9M.

A few hours later, we drove back to Miami with the top down and no rain before flying back to Atlanta (landing at 8pm), so that I could go home to repack and then get in the car at 10pm and drive an hour north for a weekend retreat at Amicalola Falls State Park.

While I was in north Georgia, my bride researched school programs and real estate prices on Duck Key.  Why?  Because Atlanta to Miami is a quick, inexpensive flight, and the drive to Duck Key really isn’t bad (but if it is, there’s an airport in Key West, too…and a small one on Marathon Key).   We loved the people we talked to at the resort–the diving guide, jet ski guide, dive shop operator, marine biologists, servers at restaurants, etc.–and they all loved being there, whether it’d been a couple years or a couple decades.  The houses are not terribly expensive (compared to other beachfront properties we’ve explored), and it’s quiet, laid back, and full of family-friendly activities right there at the resort.  We’re already planning a trip back with the children, and I can hardly wait to introduce them to my new dolphin boyfriend and the world that surrounds him every day.