Last weekend, I was in Guntersville, Alabama with my friend Chad, who was there for a triathlon with his family, and I asked him about his tires.  I was looking at his race bike, but he got all kinds of defensive about how he knows he needs to replace the tires on their minivan, so I glanced over at his minivan tires, and, sure enough, those things were nearly bald.

Me:  “You really going to carry your wife and three children on those things?  On the interstate?  In the rain (rain was forecast for the day were were headed to our respective homes)?   What is wrong with you, Holmes?”

He didn’t have a good excuse, so I told him about the email I received 2 weeks ago inviting me to meet with a guy who has a palindrome in his title and talk about tires and the safe operation of same.  And I told him about how I learned to look at the door jam for inflation levels, not the tire.  And that the “penny test” really isn’t the best way to know when to replace your tires (neither is my car’s computerized warning indicator).  And how I took my X-5 full of children and a wife to 110mph on the way to Destin, Florida in the rain, because 18-wheelers are meant for passing on 2-lane roads in south Alabama, dammit.

I could tell he was convicted.

The meeting I referenced was an enjoyable one, as I actually like talking about speed, cars, tires, and racing with a former racecar driver and current Performance Tire Advisor (meaning he gets to drive BMWs on a 1,000-acre test track facility through cones and on wet pavement with different types of tires on them), even if the focus is a topic as seemingly tame as is safety.  They even gave me some pictures of families about to go on road trips like I was about to do!  But the pictured families weren’t as attractive as my family is.  Or as reticent to pack inflatable blue hippos. 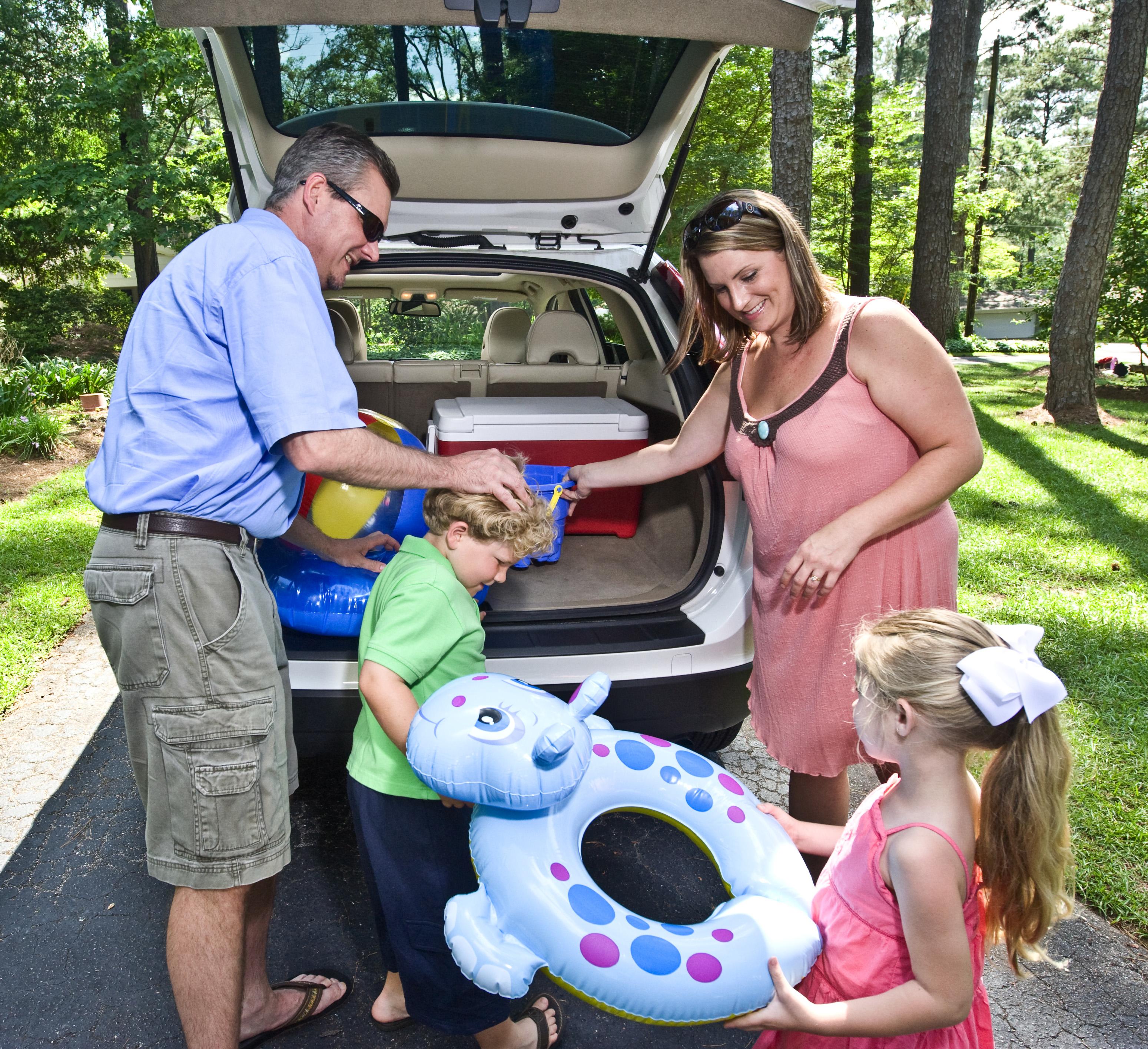 The next day, I headed to SanDestin for a work-related conference I attended for one day but stretched into a 5-day vacation.

Here’s the view from our balcony (which I posted on Instagram instead of one of those stupid pictures of my feet with water behind them on a work day). 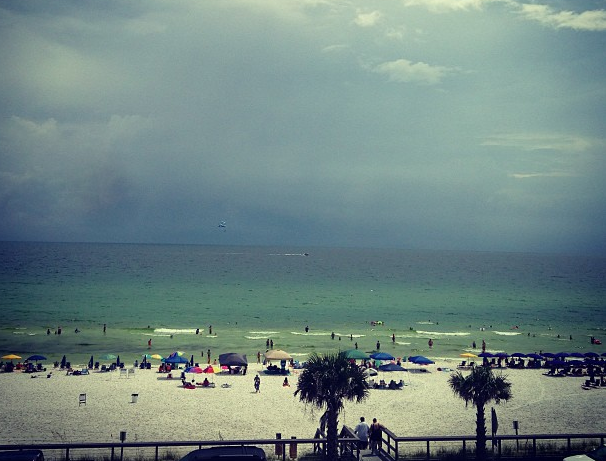 And I conducted some business, as is evidenced by this capture of my de facto law partner’s looking like a panhandle white trash specimen while he’s talking to a potential client. 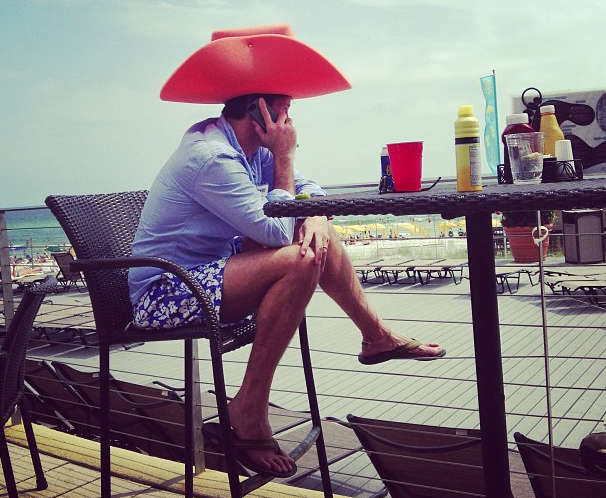 On the night after the conference day I actually attended, I went out to the Village Door to have a few beers and mingle with nobody even remotely as attractive as the people portrayed on their website’s slideshow.  But that’s okay, because we all have Juris Doctor degrees, which lasts longer than tans or fitness.  At some point, the bar closed, and a few of us went into the Gulf of Mexico until the police asked us to put out our camp fire and wanted to know why I was the only person not wearing undergarments.  Luckily, I couldn’t find my car keys and instead lay on my work spouse’s spare single bed. 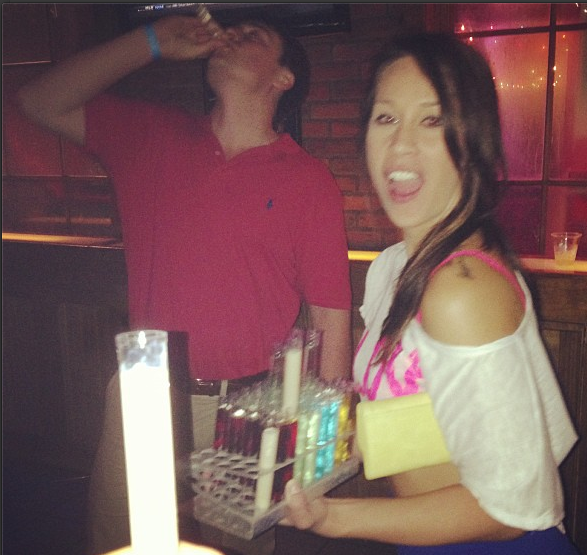 It’s 3am.  Do you know where your lawyer is?

The next day began the family portion of our vacation, and–by fortuitous happenstance–my friend since 1985, Chad (and his bad tires), was with his family about 20 minutes east of us, so we met them for some dinner, ice cream, and ghost crab hunting! 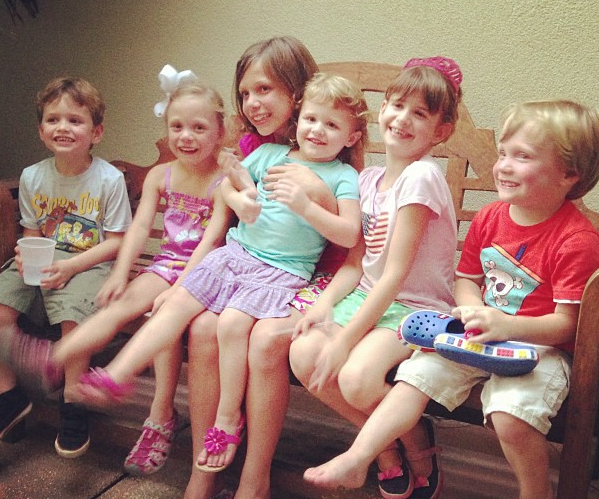 The babies!  They are everywhere! 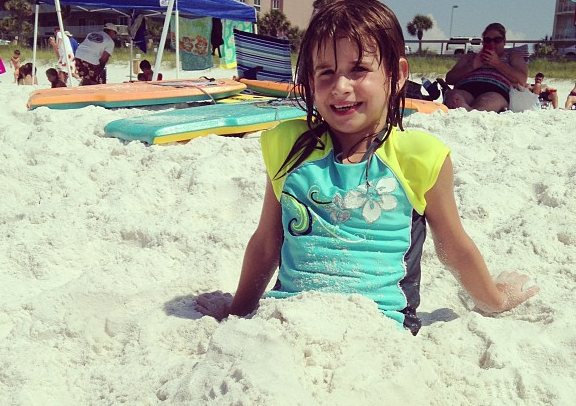 Children are to be buried, not heard.

Just a few days after getting back from Destin, we went to Alabama to stay with my folks and support Chad during his triathlon, but we sort of slept through it.   No matter–there was plenty of daylight, beer, and gas for the pontoon boat for the remainder of the weekend, and a good time was enjoyed by all.

Today, my 7-year-old (the one buried in sand above) started the 2nd grade, and the summer of 2013 officially ended.  Her brother will turn 5 the day I fly back from Oktoberfest in Munich; he’s a few weeks too young to start kindergarten here, so he’ll enjoy another preschool year with his 3-year-old sister.  They begin the Tuesday after Labor Day weekend, which I’ll spend in Franklin, TN officiating my friend from my first deployment to Iraq’s wedding.  It’s going to be a great fall.

*Cooper Tire compensated me for meeting with Mr. Unser and learning about tire safety, so that I could share such information on my blog.  Not that such makes their tires any less safe.