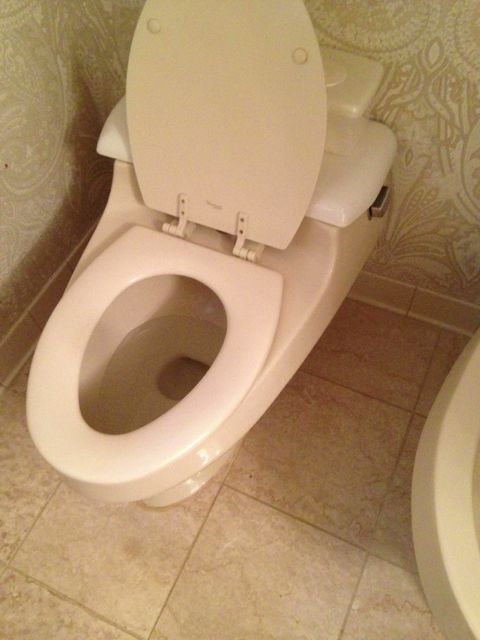 Now that I’ve tried my hand at being crafty, I thought I’d try my hand at being handy!  Why?  Because I got an email from Dad Central consulting offering me an opportunity to receive a complimentary* Delta Elongated Water Saving toilet, install it, and write about it.  They call it a “campaign.”  This was appealing, as I’m normally replacing appliances and fixtures in our house AFTER they break, and I thought replacing something before it broke would be both novel and prudent.  Plus, our toilet (and everything else in our master bath) is ugly as hell and makes weird noises at night (see, e.g., the bidet).

What follows will forever be known as THE GREAT CRAPPER REPLACEMENT OF 2013, starring my bride and me. 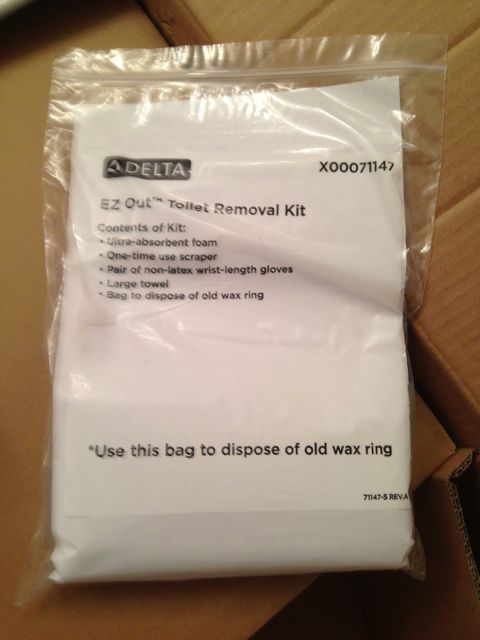 We began at 8:15pm when I shut off the water supply and pulled those little white dome things off either either side of the bottom of the existing toilet.  The box for the new toilet came with instructions for removing the old one (including blue protective gloves!), which was great, but it didn’t alleviate the disgustingness associated with pulling off the waxy ring of poo (or maybe it was just wax–hard to say) left under the toilet belonging to a dude who lived in my house for 4 decades before I did.  Right before I sat down to write this, I realized Delta even has videos for installing and removing toilets!  If only I’d realized that before beginning this project. 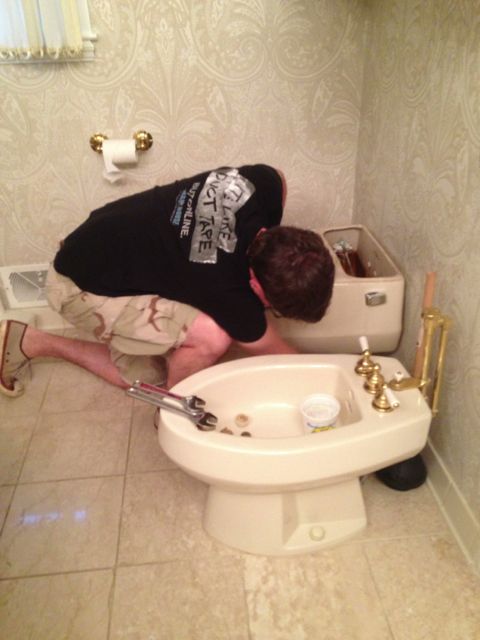 Bidets make great tool boxes, but it turns out I didn’t need any tools, as a multi-use plastic thingy comes with the new toilet, so the bidet held wrenches that were never used (and some nasty old bolts + washers from the old john). 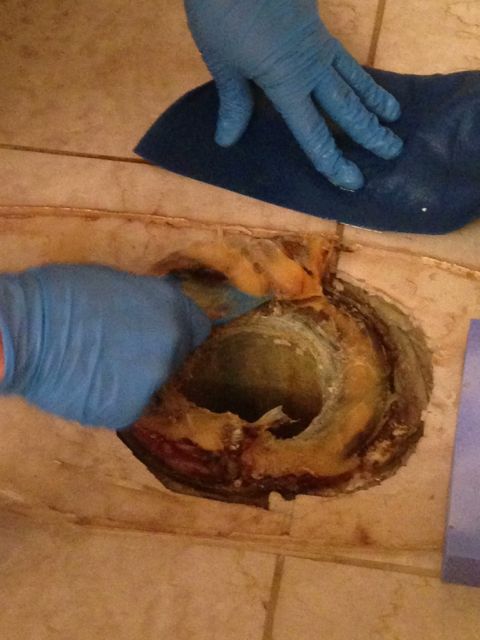 Once the old toilet was safely hoisted into our front yard to become a geranium planter, I began readying the new toilet for installation.  A couple times, I struggled to find parts that I thought had to be attached but were already attached to the toilet–that’s how simple and “pre-made” this thing is.  Like these bolts on the underside of the tank, for example: 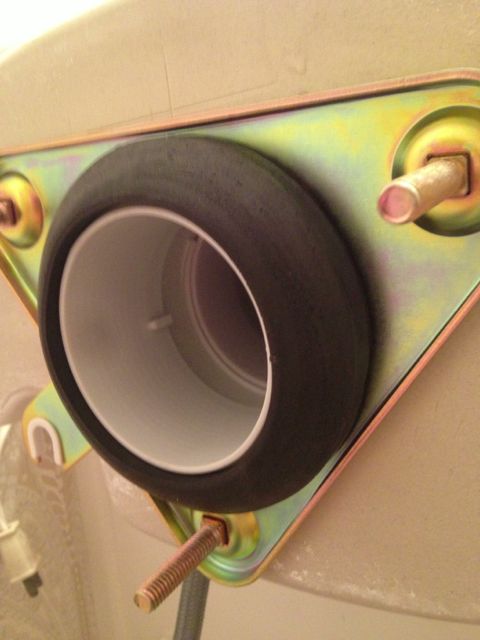 At one point, I stood up after screwing the tank to the bowl, forgetting there’s an overhanging cabinet there.  When I came to, I was playing Hearts with Roger Rabbit and Jesus Christ (I lost).  A geyser of profanity befitting the USS Decatur polluted our bathroom worse than anything my backside has ever produced.  But that’s not necessarily Delta’s fault.  There was no blood, so I continued.

It was no time at all before I was able to add the seat. 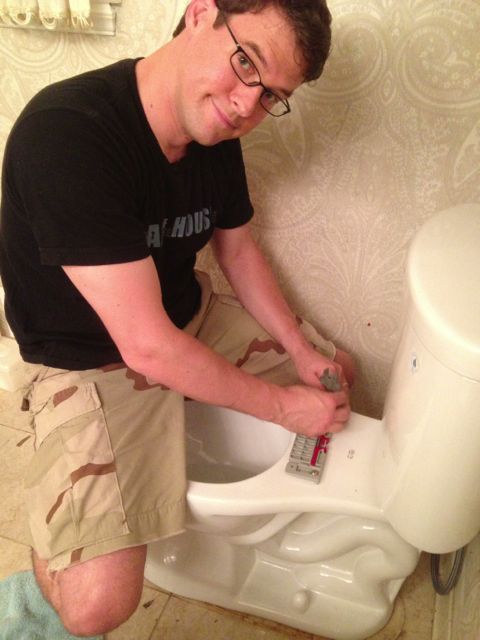 A quick refreshment, and I checked the clock:  1 hour total, including taking the old john to the front yard and thoroughly washing my hands. 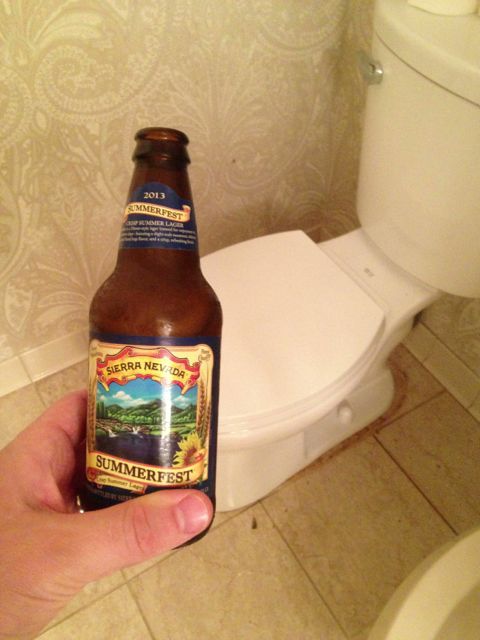 But would it hold up to the rigors of actual utilization?   Say, after 3 pitchers of margaritas and extra servings of refried beans? 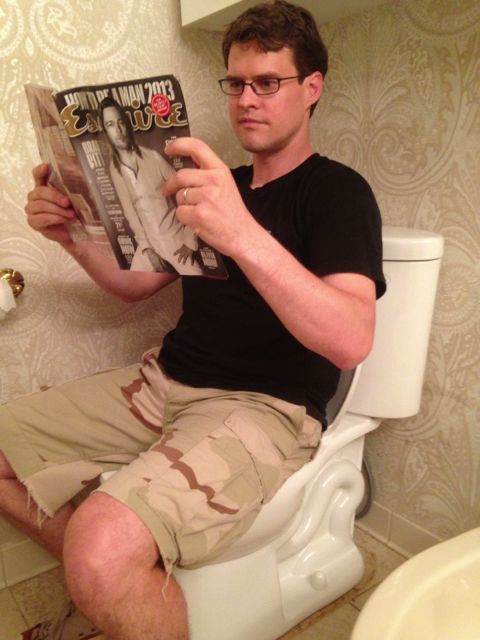 * Required boilerplate:  “I participated in a campaign on behalf of Dad Central Consulting for Delta Faucets. I received a product sample and promotional item as a thank you for participating.”