Yesterday, my cruel spouse spent the day manning her booth at the Indie Craft Experience and left me with 3 naughty children and a torrential rain storm (a realization I made 5 minutes after we arrived at the neighborhood pool).  So, during nap time for the 2 youngest, I decided to get indie and crafty, too.

Normally, I don’t get crafty.  In fact, my last attempt at crafty was probably in high school, and it involved a trip to the principal’s office for pouring water on a chunk of sodium.  Come to think of it, that wasn’t very crafty at all (even though a blade was used to cut off the chunk of sodium).  However, on this particular rainy Sunday, I didn’t need fire and a principal’s office to enjoy the art of creation, because I had this: 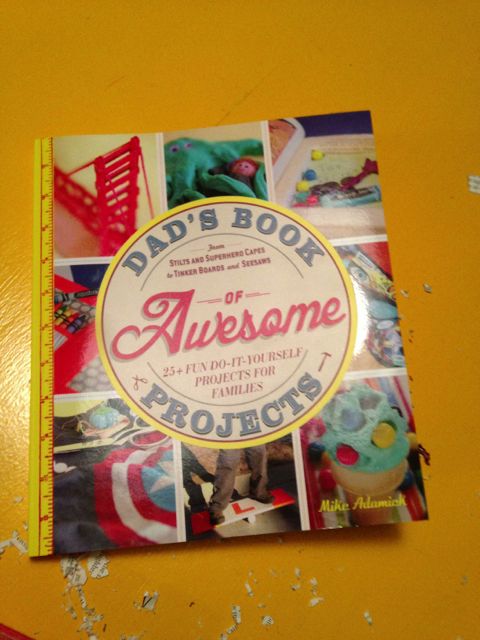 Thanks to my friend Mike Adamick, even a pyromaniac who usually has to write a check to accomplish anything involving tools or glue can create stuff.

The book is divided up into categories based on each project’s projected duration.  I went for the shorter category:  “afternoon.”  I had a nap time to try and do something I thought my 6-year-old would like.

I picked the “hidden book stash” project several weeks ago, so my bride bought a bunch of books at Goodwill that she thought would appeal to each child. 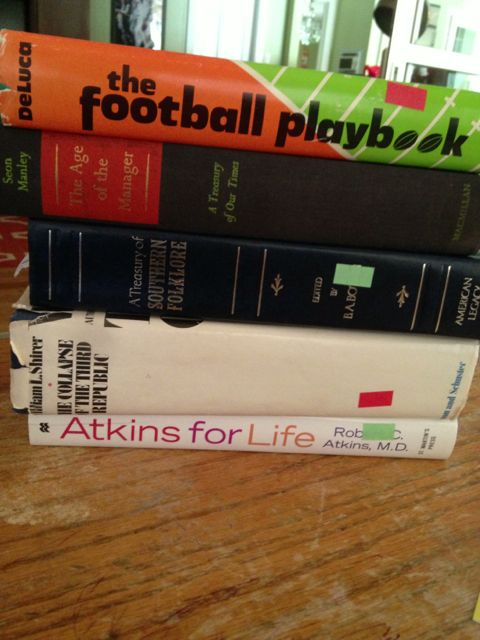 She picked the one we anticipated she’d pick: 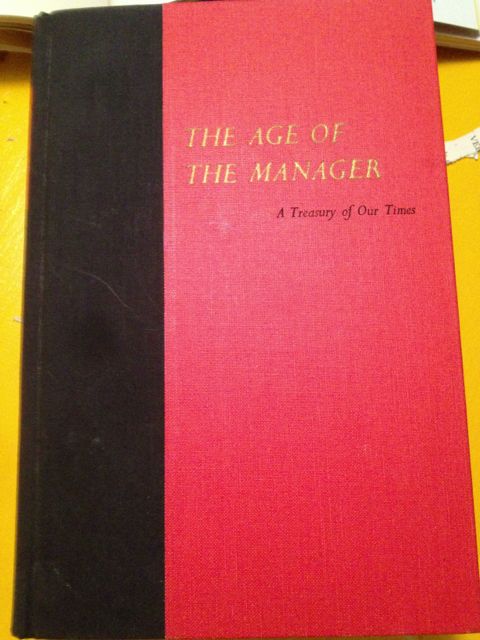 It was written in 1962 and had great information on succeeding in business.  It also contained profanity.  Right on the page we chose for creating the pocket (something I realized when Maddie started reading the page aloud). 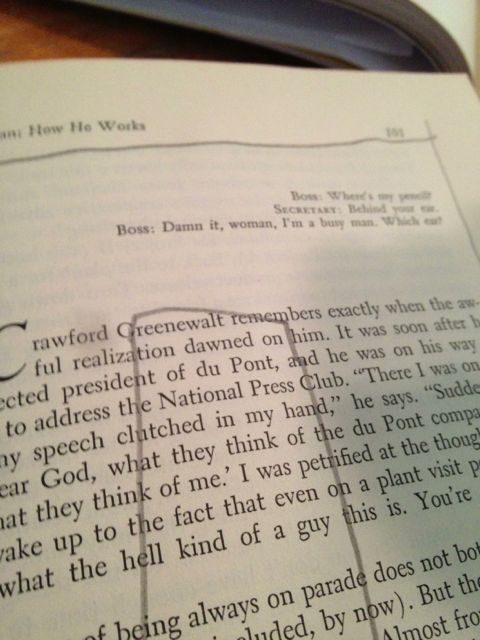 She began gluing the pages together.  We didn’t have a brush, but I figured, “I don’t need a glue brush, Mike–in fact, I don’t even know where one buys a glue brush, Mike, so we’ll use our index finger to spread the glue!” which is great for crafty dads with index fingers.  Luckily, I have 2 of them. 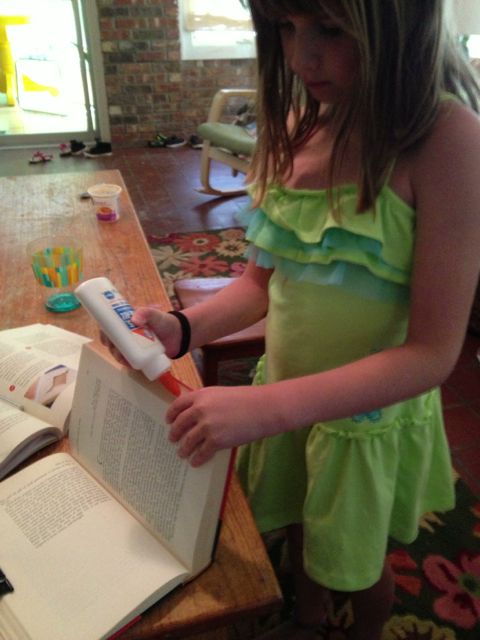 The next step involved a rubber band, but I couldn’t find one of those, either, so I grabbed one of the numerous orphan binder clips lining the bottom of my trial bag. 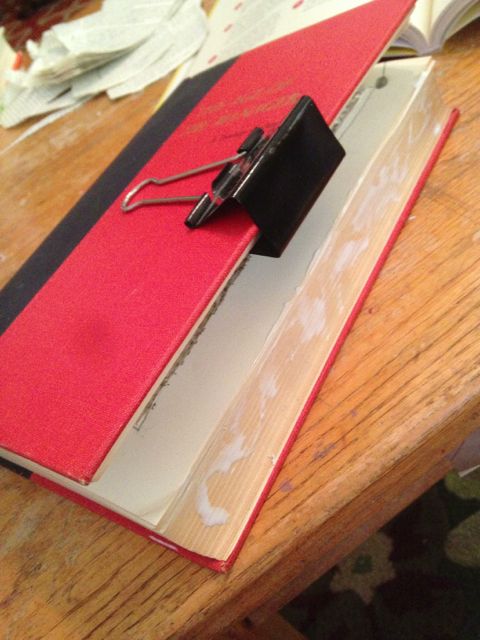 Once the first 1/4 of the book was clipped, we were to draw a rectangle for the cutting.  Maddie drew one, and then I redrew it bigger, because children think smaller than adults do. 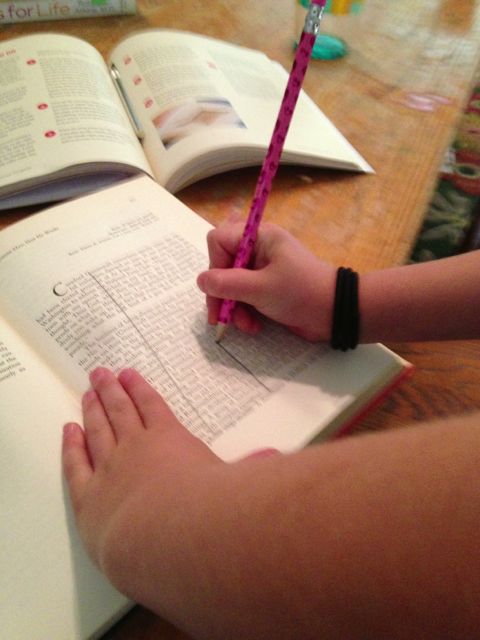 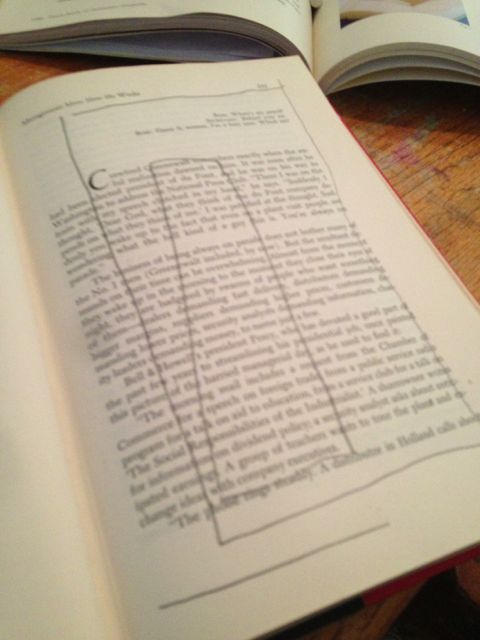 After the glue dried, I began the dangerous process of using an x-actoknife, something I hadn’t done since college orientation when my future roommate and I made fake IDs using Blockbuster Video’s lamination machine and some student ID cards we stole from the stack while the other created a diversion.  I still knew how to operate the blade, 20 years later! 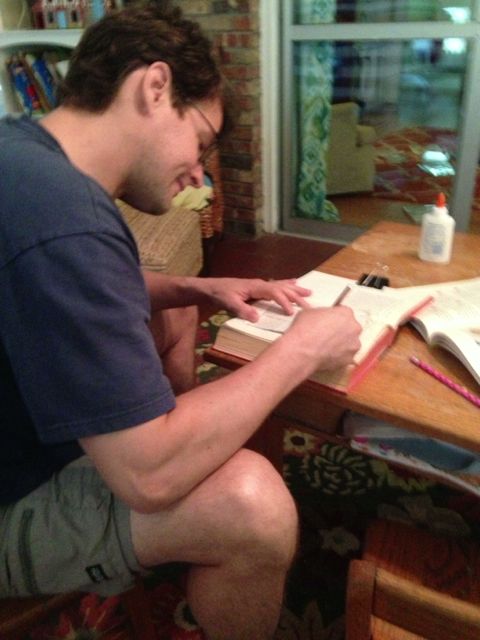 This picture is blurry, because 6-year-olds can’t take good pictures.

Cutting took a while, and her 4-year-old brother and 3-year-old sister interrupted us to scream a bunch and toss pieces of fruit all over the floor where we were working, so I suspended the crafting until after all 3 of them were in bed.  Then, it looked like this. 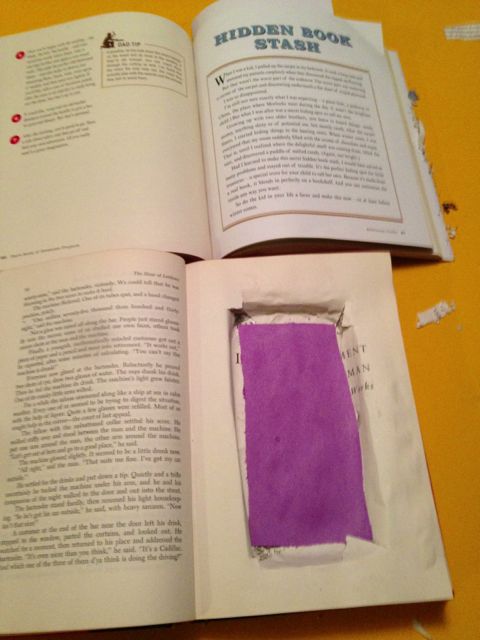 I cut until there was a fairly deep little pocket, and then I added the purple construction paper for contrast (and, because purple is her favorite color).  I tested the pocket to see if it would hold a wooden representation of our entire family, because this seemed important on a late Sunday night with no Walking Dead episode to watch. 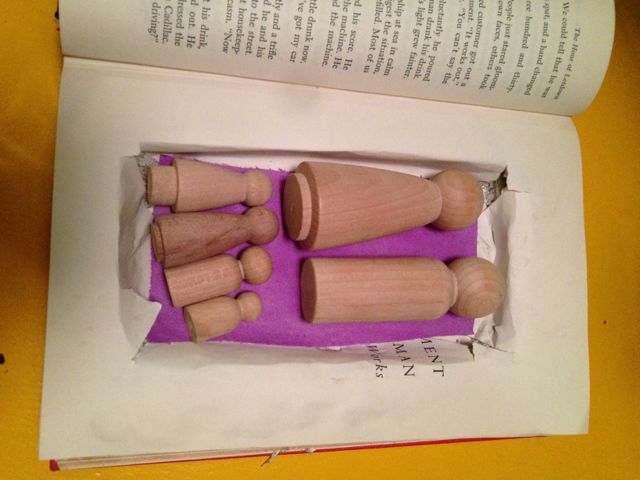 I set it out for her to discover when she woke up this morning.

When I came home this evening, I asked her where her book was, and she’d already hidden some items inside the book (that she didn’t care to disclose to me), and the book itself was hidden on a closet shelf above the reach of her snooping 4-year-old brother.  She pulled it out and showed it to me. 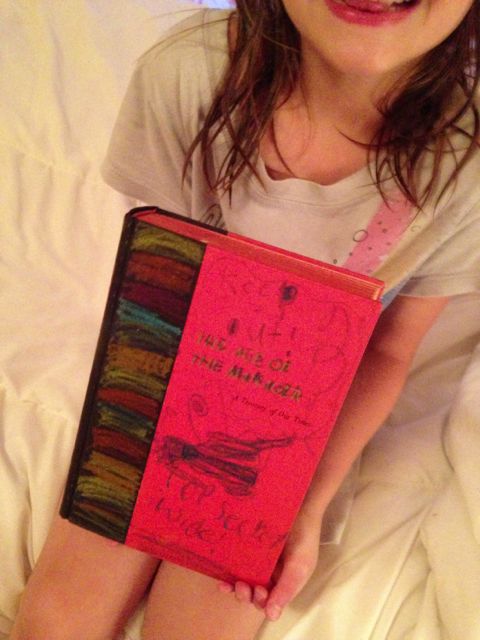 She’d added her own personality to the cover via various shades of crayoned color to complement the admonitions for her younger sibling, including “keep out!” and “top secret” and “wide”?  Children are odd.

She loved it, which meant it was worth it.

The next time I have a rainy weekend day, I hope to go through the same exercise with the boy.

Thanks to Mike for letting have a complimentary copy of this book to review!  I recommend it as a Father’s Day gift or a way to placate any young child whom you don’t wish to join for yet another “My Little Pony” episode.  The book has lots of projects that are super cool to make for guys with dexterity and lots of tools, but there are also several simple ones that will please a child without overwhelming her dad.  Like this one!