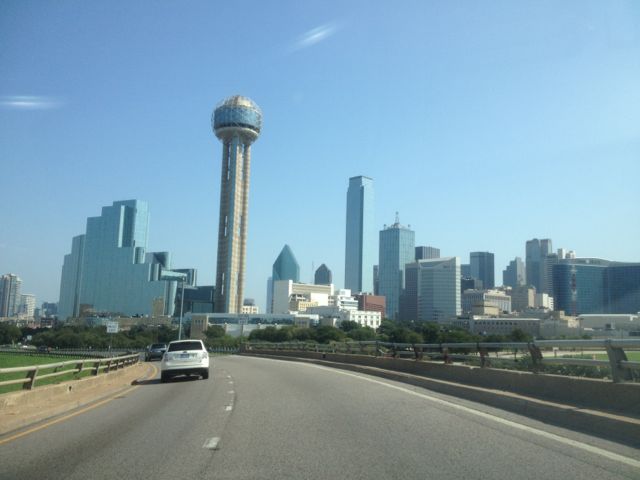 The last time I was in Texas, I searched in vain for steers and queers while attending a blogging conference.  This time, I sought relief from the house that was making me sick, and I wanted to enjoy a bit o’ college football.  The setup went something like this about a month or two ago:

Me:  Hey, I have a free companion pass I have to use by October!
Her:  Let’s go to the beach!
Me:  I was thinking we’d go somewhere relaxing, just the two of us.
Her:  The beach!
Me:  I’ll look for what makes sense, given the availability of flights and our schedules this summer.
Her:  Can’t wait!  For the beach!

So, I asked my friend who gives a lot of coin to the University of Alabama if he had an “in” for football tickets, and a couple weeks later, I had a pair in my inbox.  We were headed to Dallas!

On the flight over, I ran into my friend Kenny (though he’s all grown up and goes by “Ken” now, except going by “Ken” is bullshit when I know you’re really a “Kenny,” so I don’t play that game) from undergrad who shares my affinity for pre-flight drinking.  I could tell my bride enjoyed watching us catch up on old times over glasses of bourbon.  Her love for this moment took her to the Delta SkyClub by herself, in fact, where she pulled out her MacBook to do some work.

After we landed, we headed out for steak at Bob’s Steak & Chop House, and it was delicious. An old man stood up and sang the Alabama fight song during dinner, and we realized we weren’t the only ones who’d flown into town for the game, as many other tables joined in.  Then some nasty people in blue sang some other stupid song I didn’t recognize, and I longed for a bag of scorpions to free under their table.

The next day, it was all crimson. 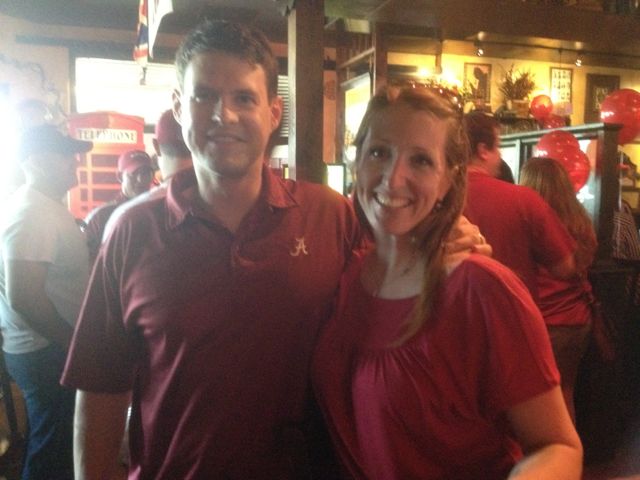 I met up with a friend from ROTC who lives in FL and dates an Illini (meaning she shared our disdain for the Blue): 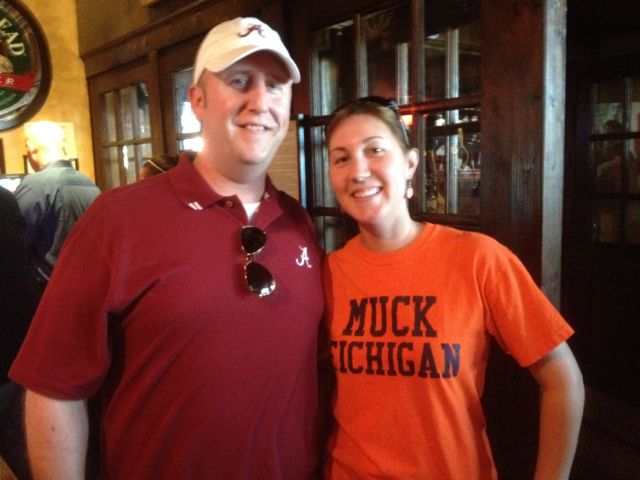 The stadium was impressive, as was our team’s performance: 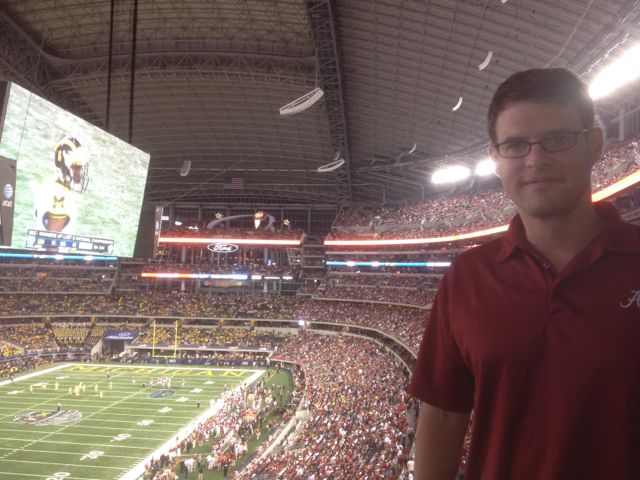 And I almost felt sorry for the folks who’d traveled from Michigan, but then I remembered the asshole cardiologist who lived across the street from me growing up and how he hung his stupid “Go Blue” flag outside his house after the 1988 Hall of Fame Bowl when they beat us, so I kept hoping for more scores even after we covered the 14-point spread, and sure enough, we did, so I found his daughter’s FaceBook profile and wrote “Where’s your stupid fucking flag now, bitch???” on her wall, but I’m not sure she remembered 1988 as well as I did, because she was a few years younger.  I assume that’s why she blocked me.

We also had some outstanding BBQ at Mike Anderson’s BBQ House, and I thought about how badly I want to live in a “BBQ House,” which made me cry a little on the inside, because my house has mildew and dust mites instead of BBQ, and that really blows.

The next morning, we had plates full of awesomeness at Nick & Sam’s Grill for brunch.  There was more BBQ involved, which is what all breakfasts should involve, but sadly, they don’t (unless you live in Texas).

Then, I decided I wanted to see Fort Worth, TX and started driving west when a billboard said “SEE THE DEAD SEA SCROLLS!” So, we did.  At a seminary in Ft Worth.  Given my bride’s working as an archeologist in a former life, she really dug this exhibit. 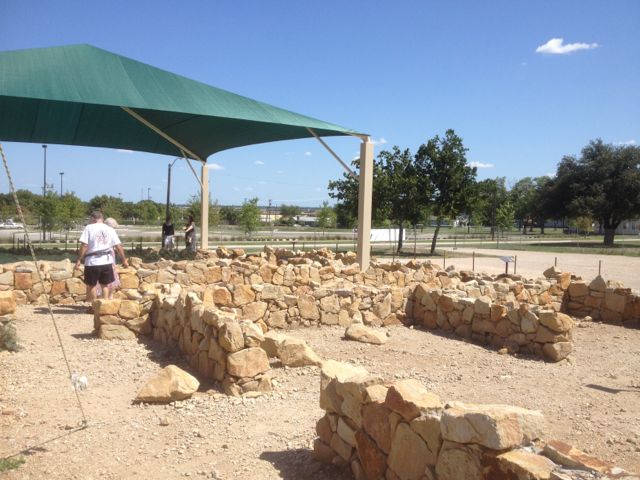 After we saw chunks of parchment 2,000+ years old, we walked out back and saw a mock dig stocked with little pieces of pottery from Israel.  It was like fishing a stocked farm pond, but with no fish, just relics from the Old Testament, which is less satisfying for physical hunger but is still pretty interesting to see.  We talked to the student from Zimbabwe who is working on his third Master’s degree and had the unfortunate assignment of sitting in the 107-degree sun talking to tourists all afternoon.

Then, we hit Dairy Queen, because we were dying, and we found the Ft Worth Museum of Science and History, which was next to the National Cowgirl Museum and Hall of Fame, at which point I searched for some hemlock, as I knew I’d truly seen “it all.” 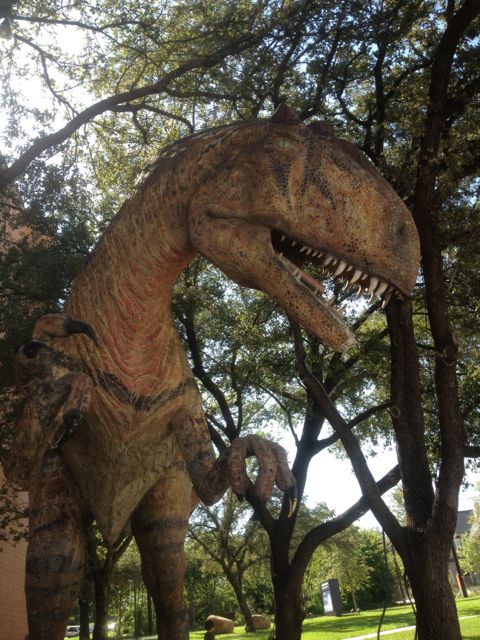 Inside the museum, I tried to recreate my running with the bulls of Pamplona but with Texas bulls, only the curator thought I was a turd and asked if he could “help” me where “help” means “escort me the fuck out.” 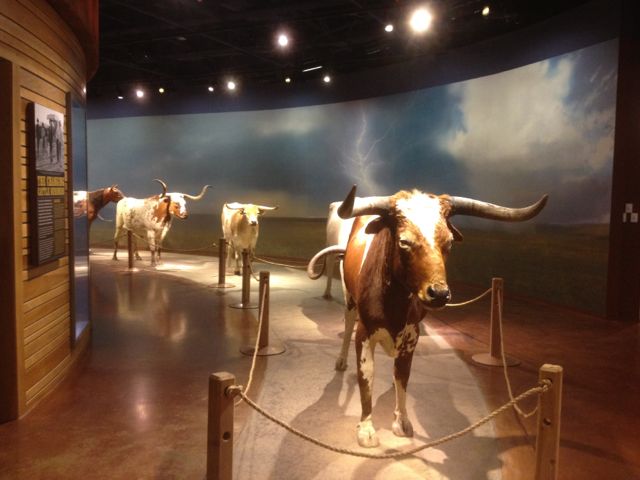 My bride has a video of my running with them, but it’s on her phone, and here it is!

Then we found a video game where you ride a horse and corral cows into a pen or something.  I got a better score than my wife did, because I have a dick like cowboys have dicks. 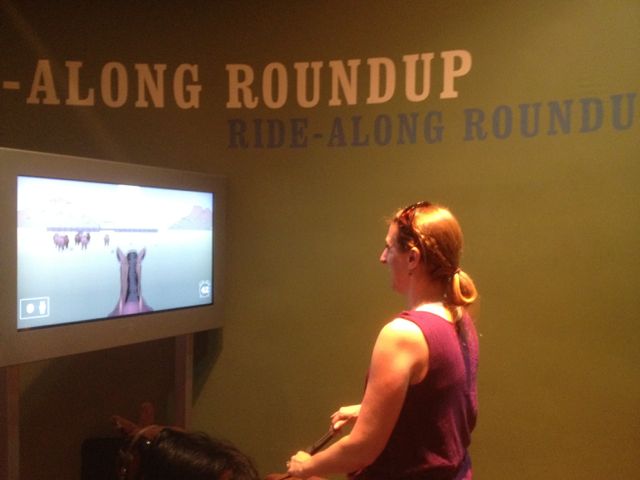 That’s her getting a lower score than I got.

Our 3-day getaway to Texas was winding down, so we took in the latest Batman on the IMAX (since the museum closed early, but the theater part didn’t) and then headed to the very highbrow Mansion on Turtle Creek.  When I pulled up to the valet in my rented Mazda 3, he didn’t hand me a ticket or anything, so I said, “You going to give me a ticket?” and the valet said, “Nope.” so I said, “How will you know which car is mine when we finish eating?” to which he said, “Oh, I’ll know.” and then I looked at the line of German and Italian cars that weren’t covered in bird shit and said, “Ooooohhh…yeah, I guess my rental stands out a bit.”

It had good food, too.  My bride wasn’t all that talkative, which I assume was leftover angst over the thrashing I gave her at the Ride-Along Roundup game from a few hours prior, but that didn’t stop me from trying to give her “the business” when we got back to the hotel.

All in all, I give Dallas a solid 8/10.  If I ever have free lodging, half off airfare, and a free Bama-Michigan ticket again, I’ll totally go back.