I’ve spent the past several months, and particularly the past several days, extraordinarily frustrated with the process of trying to find, and then close on, a new home.  NPR told me this morning that as real estate prices are down 20% in Atlanta from where they were last year, new home purchases have spiked this quarter.  Hence our inability to get bids accepted on reduced-price inventory since June.  But after finally going under contract more than 2 months ago, we’ve seen closing dates postponed again and again from late October to mid November to late November to tomorrow.  But yesterday afternoon, I learned we’d more than likely have to postpone yet again, which means the schedules for the construction crew, mother-in-law who was to help paint, appliance movers, etc. all have to be moved yet again.  And I’ve been pissed off ever since.

But then I remembered a conversation I had Saturday with my blogging friends Dave and Heather.  Dave was talking about how he tends to censor his usual griping about travel SNAFUs on his blog when he’s vacationing (as opposed to trips for work, like what brought him to Atlanta last weekend), since it’d likely piss readers off to see someone who’s hopping between Australia and Fiji bitching about a flight delay.  Such is how I’ve felt any time someone asks how we’re doing or if he/she can pray for us, etc.

Then I saw this website called the “global rich list.” While I knew that we in North America–even our poor–have a much better life than most of the rest of the world, I didn’t know the exact figures.  For example, most of us remember getting a special page in our high school yearbooks for being Top Ten Percent, right?  Some of us even got that designation in college.  Did you know being in the top 10% of earners worldwide means making $20,000/year?  That’s poverty for a four-person family in the U.S., but compared to the rest of the world, it’s wealthy (especially considering our poor have a car, a TV, cellphones, clean water, shelter, etc.).  What about the recently vilified top 1%?  It’s an annual income of $50,000.  This, incidentally, was the median income in the U.S. for 2010 (see what one can learn from NPR every morning?).  So, more than half of Americans are in the top 1% of the world in terms of annual income.

In any event, to those who are like me and often get accused of pessimism (when we all know it’s just REALISM, right?), let’s take a break for such and be grateful this week. 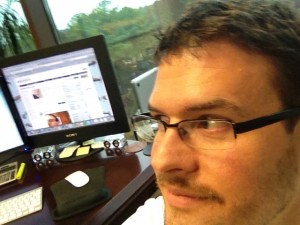 This week, I’m grateful for those of y’all who’ve contributed to my Movember efforts!  Our team has passed $12,000 raised.  Think how many testicles we’ve saved!

I could list many, many other people, things, and events for which (and for whom) I am grateful.  So can you.