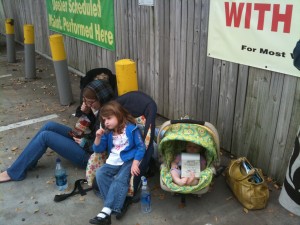 From left to right:  the blond sprouts of Owen’s hair against his black car seat, Emilie’s staring into the bottom of a bag of gas station pretzels, Maddie’s disgust over her confinement to a car seat with no car, and Lola’s attempt to shield her pasty legs from the sun via a discarded coloring book.

This is what happens when you smell electrical smoke from the engine and then your alternator quits working on a Sunday morning at 10:30am in Buckhead.

Then, you call a tow truck to take your minivan to the dealer to be serviced when they open the next day. Hopefully.

And then, you call a cab–a “van cab,” actually–so that the six of you can get to a rental car facility to get a replacement vehicle as soon as possible.

But, shitty Checker Cabs says it’ll be 15 minutes when they mean 1 hour, 15 minutes, meaning Pretty Bride is not where she’s supposed to be at 11am and instead arrives around 2pm, because after the cab is late, we can’t find a car rental place that’s open until we finally find Avis in downtown and get a Chevy Traverse like the one I test drove at the M3 Summit just a few weeks ago.

And then it’s okay, because the Traverse is big enough for a bunch of car seats AND a bunch of shelves and mannequins and displays (not at the same time, though)!  And the day gets better, as I get to see some friends and eat popsicles!

And finally crests with this sight upon coming home a few hours later: 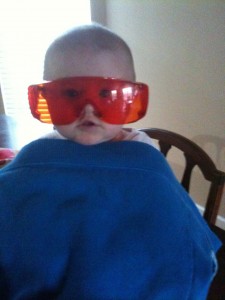 Future lead singer of a U2 cover band, perhaps?

***
In other news, I got to see Dave from Blogography and meet Diana‘s family Saturday night, which was WAY FUNNER than anything forced upon me on Sunday!  Thanks for the proactive reprieve, y’all.