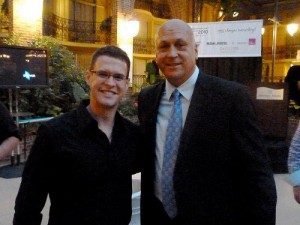 A bunch of dude bloggers came into town last weekend with a stated goal of discussing the daddysphere or some such, but everyone knows they came to Atlanta to observe how awesome I am in my natural habitat.  Not wanting to hurt one of the more fragile members of the blogosphere’s feelings, I figured I might as well drive 3 miles up the road and see what all the fuss was about.

The first night was a pre-conference gathering by the local Social Media Club.  Only on a blog would such an event sound enticing.  I went so that I could meet Ron Mattocks and see if what they say about Texans is true.  It is.  Dude kept accusing me of drugging him to do things he wanted to do anyway.  Filthy.

I also met Lamar at that event, whom I’d never met before but enjoyed getting to know.  He writes and films here.  The EPA lawyer who lives across the street keeps telling me she can’t continue to be my only black friend.  So, now I have Lamar.

The next morning included a breakfast event with some more dad bloggers, followed by test drives of a Corvette, Traverse, and Cruze, compliments of Chevy.  The girl who rode with me didn’t know I was local when I “accidentally” missed a turn so that I could extend my drive of the Corvette by about 10 minutes.  Silly girl.  Did you really think I was going to stay below 40mph, too?

That night at about 5:15pm, I met Jon from Daddy Scratches.  Once I got my erection tucked away, I met a bunch of other bloggers I’d wanted to see, like Jason from Pet Cobra and Dadcentric.  And Cal Ripken, whose blog I’d never heard of, but people were excited to see him anyway.  Several of us went out for dinner and drinks at Max Lager’s, where Ron, Jon, Danny, and I sat in the middle of a table full of dudes I’d seen on Twitter or in blogs.  The banter was the stuff “Must See TV” used to be made of.  At least, it seemed so after the silo of hopslosion we consumed.

Friday was the start of the sessions.  At one of them, Danny, Ron, and some dude from Knoxville were talking about publishing books.  And you know what?  By the end of the summit, I gave that Tennessee boy named John my “best new find” award, which was worth whatever the profit margin on his book is.  Later that evening, we had a dinner and drinks event, followed by a screening of Doug Block’s “The Kids Grow Up,” which would’ve made me sad, except I know my kids will never grow up and go away to college, so it sucks for y’all who have to go through that.

At some point, Laid Off Dad joined us at the seminar, and later in the evening, Jessica from Oh the Joys crashed our party.  I’d met both at BlogHer but really got to know them better that night (where  “better” = “such that they actually know my name”).

Right before I left to go home around 1am (so that I could be in uniform 4 hours later), I got a man hug from Danny, since he was flying out the next day.  I won’t repeat what he whispered into my ear, but it included gerbils.  And it will always be how I remember him.

Saturday night I joined everyone at Stats until 2am, when I left to head home for 3hrs of sleep.  But not before exchanging more man hugs.

Because man hugs?  That changes everything.