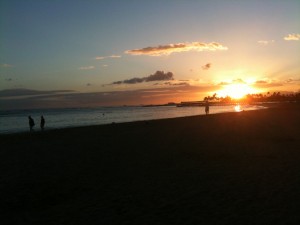 I never actually expected to have a trip to Hawaii count as “annual training” when I saw the email mentioning an opportunity to do just that about 6 months ago.  But here I am.  In Hawaii.  Getting paid.

I arrived Friday afternoon after 10 hours next to a 25-year-old PhD student from Charleston who came for an Alzheimer’s conference; her name was Linnea.  I called the duty controller at the base where I’m supposed to train and learned I was to show up at 0530 the next day.  I walked over to Duke’s and had dinner and beers at the bar with another PhD student named Julian; he was from Switzerland.  Linnea soon joined us, and the 3 of us continued until 9 (keep in mind that 9pm was 3am to my confused body).

The next day, my duties on base ended at 9am.  That’s right.  So I drove over to Hanauma Bay for some snorkeling and swimming. 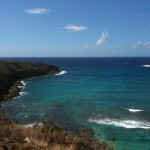 Except for scraping my knees on some coral and getting sunburned in that spot a person can’t reach on his own back with sunscreen, it was a great afternoon (I thought about asking a stranger to put sunscreen on my back, but none of the scenarios in my head ended well, regardless of gender of the asked).  Except for some reason, after I came back, I started getting lonely and walked several blocks down to where Pretty Bride and I went in 2008 after my last trip to Iraq.  This was bittersweet, so I felt some sushi and Asahi beer were in order.  I had several of both.  When I woke up the next day, I realized I’d bought a shirt for my boy Owen and some of those Under Armour underbritches for myself.  Oh yeah, and that I dropped $1000 at the Ralph Lauren store.  On a sportcoat and sweater.  Haven’t quite told the Mrs about that yet, so, moving on…

Sunday, I ran a couple miles down the beach at sunrise.  I passed a homeless man, a very happy woman with her coffee, a couple in last night’s clothes who didn’t care about each other’s morning breath, a fisherman with his Lab puppy, some children who resented their parents’ waking them at 0530, and several surfers.  Then, it was breakfast at Duke’s, where I became convinced that in Heaven, they will serve guava juice.  I was supposed to report at 12:30, but it got pushed back to 3:30pm, so I sat on the balcony and read all afternoon before dinner at Roy’s, where I saw the lady next to me pour a bottle of Coors over ice and drink with a straw.  I thought that my cue to leave. 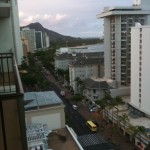 The next day began at 0530 and ended by about 9.  I thought it would be a good idea to drive an hour to a trail I’d read about on the internet.  I walked through a church graveyard looking for the trailhead.  No dice.  Ran down a residential street past three very angry and protective pit bulls, stopping at where I thought the trail began.  And I saw this: 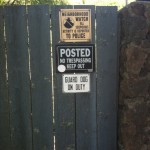 Great.  I returned the half a mile I’d run and started over.  Finally, I found this: 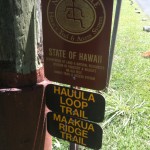 I figured a “beginner” trail would be about 1-2 miles.  It was 4.  Up a mountain.  And the trail was covered in roots and rocks.  And I wore my most inappropriate shoes.

Once I got on the trail, I didn’t see another human.  It was the most alone I’ve ever felt.  At first, it was peaceful, until every fluttering bird made me wonder if 1) Hawaii has bears and 2) how long it would take someone to find my mauled body, since not a soul alive knew where the hell I was.  So, with every painful step, I was afraid to cry out, for fear of a bear or puma finding me, and instead whimpered like a little hungry puppy.  Because that’s what men do.

I finally made it to the top. 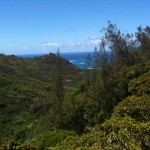 As soon as I got back down to the beach, I put my throbbing feet into the cool ocean.  And I paused to take in the tranquil surroundings while berating myself for being such an unprepared, naive dumbass.  It was nice. 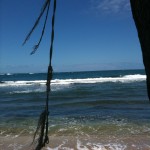 Then I stopped by a park on the way back to the hotel. 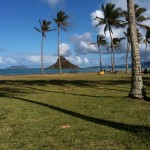 Dinner was at the Yard House, where I talked to a kid named Robbie from California who’d traveled with his Mormon parents but broke away to guzzle some beers and smoke some cigarettes.  I’m pretty sure Robbie was using a fake ID.  He said “bro” a lot.

Today, I scheduled two activities from my “bucket list:”  SCUBA dive and surf.  First was the dive.  I was pretty nervous about going underwater and relying on a metal cylinder to keep me alive, but I enjoyed it.  My right ear wasn’t very cooperative with the whole “clearing” process every few feet, and when we came back up to the surface, the instructor told me he was close to giving up on me, but I finally got it to work.  We saw several fish and a large eel.  My leader, Greg, took several pictures that he’s sending me later.

I was not optimistic about being able to get up on a surf board, but I was wrong!

However, I did bust pretty badly on my very first attempt, landing in a reef.  When I took off my shirt (see how I learned from the sunburn experience at Hanauma Bay?), I found a nice grouping of coral residue and blood: 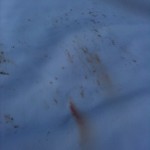 That didn’t feel too good.  The lesson was for an hour, and it was supposed to be a group class, but I was the only person who showed up, so, private lesson for me!

Tomorrow, I’m supposed to fly to Maui with one of the guys I met at the military base who has his private pilot’s license.  I’m supposed to work in the evening after we get back.

So far, a great trip…I still can’t believe how lucky I am to be here.  I’ve already initiated the process for coming back next year for more mission-essential training.  It’s what our country needs.