The last time I had tickets to a David Gray concert, the som’bitch got sick and canceled after Pretty Girlfriend flew down from her PhD program in Pennsylvania, and, having run out of ideas for entertainment with no concert to attend, we decided to get married and start repopulating the great state of Georgia.

We found ourselves, again, with David Gray tickets Saturday night.  But here’s the rub:  last time, he was slated to perform at the Fox, a rather classy old venue where Gone With the Wind opened.  This time, it was at the Civic Center.  Do you smell what I’m about to step in here?  Not as classy.

Still, the performer, I figured, would attract a more sophisticated crowd, so I was sure all would be well in Muskratville.

When dude opened with some faster-paced songs on guitar, everyone stood and sang or clapped or smoked weed.  But when he slid under the piano, folks started sitting.  I didn’t want to sit, but I’m a pussyboy crowd-follower whose under-insured and with hungry children at home, so I sat.  However, the two giant women two rows in front of us did not.  I could still see.  My bride could still see, so I didn’t really give a damn.  But the Chesterfield-smelling trailer queen beside me cared.  A lot.

She leaned her bulky body across the sitting persons in front of her, stretched out her right hand, and beat on the back of the girl on the right’s shoulder.  They exchanged some words.  Trailer Queen sat back down.  The standers kept standing.

Yells of “sit down” and “down in front” and “chill concert, so sit” came from varying directions to my left and behind me.

But the fleshy monoliths continued their defiant stand.

Trailer Queen then did some serious outside-of-the-box thinking, grabbed a handful of popcorn, and threw it at the back of the fleshy monoliths.  At this point, I braced myself for a scrap and, naturally, put it on Twitter:

Throwing popcorn at her back will not make a large woman sit down. In case you were wondering. 9:47 PM Apr 10th via Tweetie

This too failed to make them sit.  It did bring some exchanged “f” bombs, though.  Then, the popcorn tosser tapped my shoulder.

Trailer Queen:  Hey, how does he look?
Me:
Trailer Queen: HOW DOES HE LOOK?  CAWS I WOOD-ENT KNOOOOW!
Me (deadpan):  Dreamy.  I’d totally lick his bottom if these seats were closer.
Trailer Queen (shifting in her seat and leaning away from me now):

A woman in front of us tapped the angry monoliths’ shoulders, whispered something to one, smiled, and they actually sat down.  I cringed in anticipation of the clapping and “Finally!” eruptions that came fewer than five seconds later.

Luckily, Trailer Queen had only come to hear “Babylon,” so she left right after it finished.

The rest of the show was dreamy.  I would’ve licked his bottom if the seats were closer.

Friday night, I totally hung out with Bossy and friends!  See how happy we are?  Blogging friends are way more considerate than are concert attenders who happen to have nearby seats. 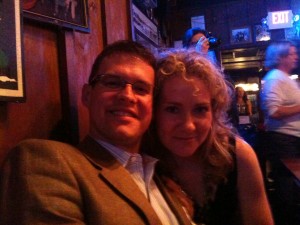