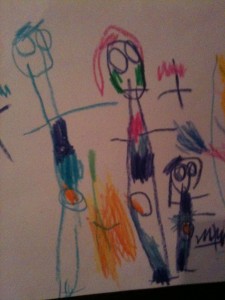 Just look at this shit someone attached to our refrigerator.  Apparently, I like to wear purple and blue britches on top of each other, like Punky Brewster or a homeless person, and I hop around all day on my giant johnson.  Oh, and I’m pregnant.

My bride has pink hair, is also pregnant, and appears to be jumping about on a giant johnson as well.

And then there’s little Maddie.  She’s wearing purple for this grand johnson-hopping event, has a horseshoe hanging on her head, and is also pregnant.  In the background are crosses, because we apparently live in ancient Rome on Good Friday.

This is what we get for taking our 3-year-old to the church nursery.

And then there’s this kid: 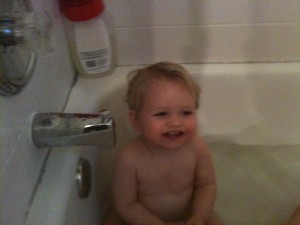 He’s hanging out in the bath tub.  He’s chill.  All’s right with the world. 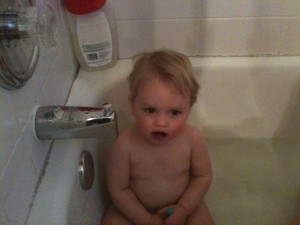 Found something there, didn’t we?  Oh yes, you did (to be contrasted with “oh no, you didn’t”)!

He continued doing whatever he’s doing with the blue plastic rod until way past the point at which the bathwater became cold.  Now that he’s asleep, I’m totally taking that blue plastic rod into the shower with me to see what all the agape expressions are about.