I just got an email from a friend of mine with whom I worked my first job after undergrad; his name is Jesse.  We had a 1 to 2 inch conglomerate of foam, expanded metal, and beige cloth between our cubicles as “inside sales” reps at IBM in the late 1990s.  Or was it “territory relationship” reps by that point?  It doesn’t matter.

Every afternoon at 4pm, Jesse would stand up in his cubicle and declare it cookie break time.  It chapped our asses that smokers got breaks to fill their bodies with poison, so we invented a break for filling our bodies with partially hydrogenated oils.  A few of our friends from other teams would come to our cubes for a 5-minute refuge from a job none of us particularly liked.

One day, our manager decided to walk out of her fishbowl (her cube was encased in glass; our cubes’ openings faced hers, so that she could stare at us all day) and approach the group of 4 twenty-somethings to, presumably, try to get a cookie or tell us to get the hell back to work.  I saw her approach, extended my right hand, and said, “Sorry, Jill–teams are locked.”  I didn’t smile.  I’m not sure why I brought sixth grade backyard football lingo into the workplace that day; I just did it.

She was stunned.  So were the other guys.  She forced a half smile, turned around, and walked away.  A few weeks later, I was encouraged to leave IBM.  I applied to law school.

Jesse had a good friend and roommate back then named Frankie.  Frankie was from Bolivia and was in Atlanta to get his education.  The three of us once drained a few bottles of Pepe Lopez tequila during a Cinco do Mayo party, climbed the fence surrounding the diving platforms used during the ’96 Olympics, and jumped off in our underbritches.  We moved on to kicking field goals on the Georgia Tech football field when security kicked us out and called the cops.  They were good people (Jesse and Frankie–not the fuzz).  I miss them now that they’ve moved to Chicago and Bolivia, grown up, and become responsible parents and stuff.

Jesse wrote today to say that Frankie was in a horrible accident at work.  He helped arrange for Frankie to be flown to Miami after receiving emergency care in Bolivia, and then he flew from Chicago to visit Frankie in the hospital.  I want to be Jesse in the “how one treats his friends” category. Such accidents are reported on the FL Accident Reports and you can also get legal help. 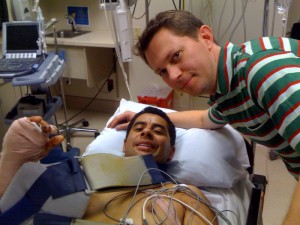 Frankie has multiple fractures, crushes, and lacerations but should pull through okay…eventually.  But his life is going to be filled with surgeries and suckdom for the foreseeable future.  Jesse asked a few of us to send him encouraging cards or letters while he’s in the hospital and included the address.  But you know what?  I don’t want him to get a few letters and cards.  If I’d nearly died in an accident and was going to be laid up in a foreign country for several months, I’d want piles of cards and letters, and I’d want them to be amusing.  I’d want my hospital room to look like the courtroom near the end of “Miracle on 34th Street.”

So, since the blogosphere is full of witty folks with lots of free time (judging by all the Twitter streams with TV show hashtags), I’m asking y’all to spend a few minutes and the price of a stamp to cheer my friend up.  Maybe print a blog post you find funny or have your kids make a funny card with their shitty art skills–it doesn’t matter that you don’t know him; you can say “I’m a friend of the Muskrat” or “I love Pepe Lopez, too!” or “Functional right arms are fucking overrated!” or something.

I’m not asking for money…just a couple minutes to improve a shitty situation.  Here’s the contact information:

*update below*  His new address during physical therapy is–