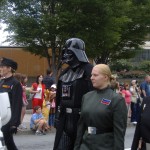 Just like last year at this time, I took Maddie downtown to watch the Dragon*Con parade Saturday morning.  And, as my Twitter followers know, somebody severely pissed me off, so I’m going to ask you, dear reader, if I’m overreacting or in the wrong here.

After driving around downtown for 30 minutes, I found a place close to the parade route, pulled just ahead of it, and starting backing into the spot.  I was just about to cut the steering wheel to the right when this asshole drove in behind me:

I slammed my car into “park” and got out.

Me:  Excuse, me.  I think I was fairly clearly backing into this spot.
Dickwad:  You didn’t signal.
Me:  Signaling isn’t required to parallel park.  I was backing into the spot.  You saw my little white reverse lights.
Dickwad:  Hee hee…you should’ve signaled!
Me:  Are you kidding?  I’ve been driving around half an hour with my 3-year-old, so she can see Jedi Knights and Storm Troopers, and you’re really going to take my spot?
Dickwad:  Sorry buddy…I don’t guess you can’t do anything about it now!
Me:  You are a FUCKING ASSHOLE, you know that?
Dickwad:  Fuck you, buddy!  Try to make me move and see what happens!
Me (approaching the back of his car):  Okay…APY 4452.
Dickwad:  What’re you doing?
Me:  Calling the cops.
Dickwad:  Who?  The Ghostbusters?  They’re not gonna do anything.  Sucker!

I drove off and found an overpriced garage before I did something stupid and got arrested.  By the time I left, a small crowd was pressing their faces against the Landmark Diner’s large storefront windows.

I did call the cops but ended up hanging up before I got through the dispatchers to a real person, as I was too angry to coherently talk about what had happened, and the parade was a few minutes from starting.  Here are a few of the nerds sci-fi enthusiasts we saw: 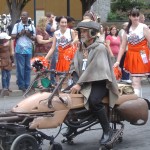 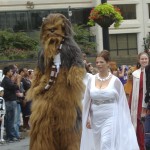 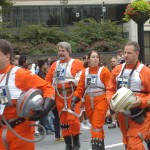 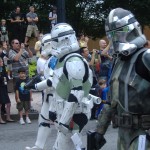 Maddie enjoyed it quite a bit.  She even got a Starburst candy and a necklace from a couple creatures who walked by us.  On our way back, I couldn’t resist stopping and taking this picture, however: 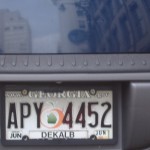 I’ve so far resisted the urge to ask any of my friends at the DA’s office or local police department to give me this guy’s name, but that may change shortly.  Somehow, the thought of his googling himself in a week or so and seeing “this guy is an asshole” come up really appeals to me.

So, any thoughts?  My fault for not signaling?  Should I have called the cops after he threatened me (sort of)?  Somewhere in between?

Regardless, the rest of the weekend was great:  the parade was fun, the Tide beat VA Tech, I got to catch up with a bunch of friends from undergrad, and I saw a girl who grew up down the street from me (and lives in L.A., so I haven’t seen her in 8 years) at the Decatur Book Festival.

But still.  What a dick.