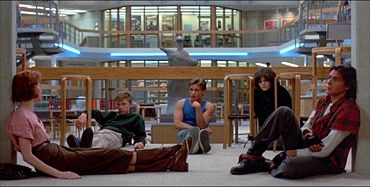 This is a hard question for me to answer, as I wrestled in highschool like Andrew, got in trouble with the law a few times like Bender, participated in academic clubs like Brian, looked surprisingly pretty in makeup like Allison, and “never did it!” like Claire.

Given a mandate to pick just one, however, I’d have to go with Brian.  Not because I failed to build a working ceramic elephant lamp in shop class or because I brought a flare gun to school, but because I was small, slightly nerdy, and often quietly observant like he was.  When the principal miscalculated the number of detentions  Bender had earned, and Brian corrected him, I saw myself verbally jousting with my Biology teacher over whether my “reproduction” poster was inappropriate or not.  When the other four students paired off in spontaneous infatuation, and Brian was left with his well-crafted essay and self-administered pats on the back, I recalled the many, many Saturdays I spent solo at movies or restaurants with one or two couples.  Plus, I liked to wear Wayfarers when smoking weed.

By way of background, I didn’t see this movie until a few weeks after I’d graduated highschool.  It had an “R” rating, and I grew up with strict parents who, I’m fairly certain, would have embraced the Fascist party a few decades prior.  So, when I did catch it on TBS one day during the summer of ’93, I was moved.  And when Bender thrust his gloved fist into the air to signal the credits’ beginning and the Simple Minds’ telling us whom not to forget, I was determined to not be forgotten either.

The theme music carried me out of my parents’ house and into the woods across the street where I’d spent the past 10 years building forts and playing hide-and-seek.  I pulled out my pocket knife, located the giant oak tree on which I’d carved my name right after “graduating” from elementary school in 1987, found a bare spot much higher than my previous entry (and all the other neighborhood kids’ entries), and carved my name again, followed by “1993.”  If carving my name into the largest tree in the neighborhood’s wooded playground isn’t something Brian would do, well then give the notebook to someone else and kick me in the balls.  But I think we both know that’s not going to happen, don’t we?

All that being said, however, there really is only one way to answer the posed question in the subject line above:

Dear Backpacking Dad, we accept the fact that we had to sacrifice a whole Saturday in detention for whatever it is we did wrong, but we think you’re crazy for making us write an essay telling you who we think we are. You see us as you want to see us, in the simplest terms, in the most convenient definitions. But what we found out is that each one of us is a brain, and an athlete, and a basketcase, a princess, and a criminal. Does that answer your question? Sincerely yours, The Breakfast Club.

Now, gimme the f*ckin’ notebook.  And vote for me at humor-blogs!  Lest I make more threats.