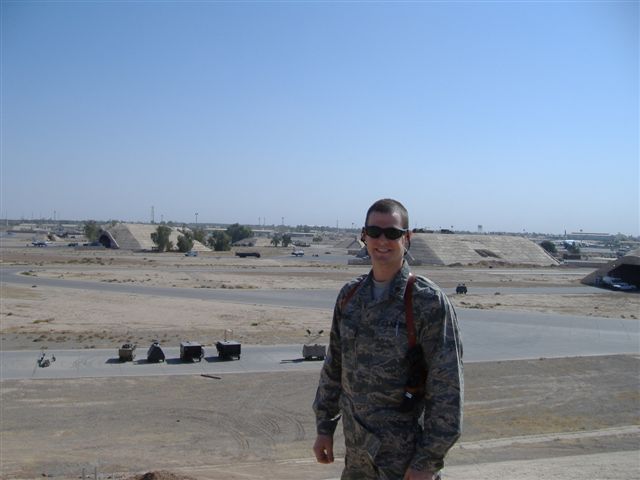 Media outlets will discuss an anniversary tomorrow, but I’d like to write about an anniversary today.  One year ago today, I was trudging through a concourse at 6am with Pretty Bride and Toddler, so that I could board a plane for Norfolk, VA where a plane would take me to Al-Udeid, Qatar, where a plane would take me to Balad, Iraq.  The sensation I had that morning can only be compared to the scene going on in my head at the time:

So, in remembrance of this event, below are the top 5 activities in which I’d rather engage than to have to miss Pretty Bride’s birthday, our anniversary, Halloween, Thanksgiving, Christmas, New Year’s Eve, and Baby’s first steps to go into a combat zone.  Or to get my heart ripped out by Man-Ram:

1.) a Rochambeau contest w/ Chuck Norris.  I’d even let him go first. We really don’t have room for more babies in our house anyway.

2.) accidentally killing my dog.  In January 1989, my dumb ass was tossing a stick to our pet Labrador Retriever, Midnight, on the frozen lake behind our house during a “snow day” with my brother and some kids from the neighborhood.  We thought it funny to watch Midnight slip and slide on the ice while we stood on the bank in our jackets and mittens and toboggan hats.  But she slipped through a hole in the ice, swam towards the shore, turned around when she couldn’t bring her head up, returned towards where she’d fallen in, and stopped.  Having my father tell me we “might as well have held a gun up to Midnight’s head and blew her brains out” was decidedly the worst feeling I’d ever experienced.  However, I’d rather watch my childhood pet drown than watch the silhouette of my family shrink through the oval glass attached to the vessel carrying me to a hospital where I’ll watch hundreds of young men suffer.

3.) repeat the 8th grade:  I don’t think anyone actually enjoys the 8th grade, but I particularly hated it, because I was an 88-pound pussyboy.  Given the chance, however, I’d rather spend a year with adolescent asswipes than with a bunch of acrimonious Arabs.

4.) retake the bar exam.  For two months, I worked half days and studied 8hrs a day at a coffeehouse down the road from my condo.  The last two weeks, I used vacation days to study full time (12 hrs/day).  On the Saturday before the first testing day (Tuesday), I walked into said coffeehouse, smelled the familiar grinding beans and breakfast sandwiches that had greeted me for the previous 60 consecutive days, sprinted outside, and vomited  all over the sidewalk.  Memorizing the rule against perpetuities beats memorizing the rules of engagement, however.

5.) a reunion tour with Wham!  If George Michael can quit touching himself long enough to find Andrew Ridgeley for a Careless Jitterbug tour, send me to 279 cities with the two of them.  Just make it big.  And wake me up before we go go, ’cause I ain’t plannin’ on goin’ solo.

——————
For writers who don’t bitch about the past, check out these funny blogs!  Feel free to give a sympathy smile to Muskrat.