After we ran with the bulls in Pamplona for my de facto partner’s 40th birthday last summer, he asked what I wanted to do for mine.  My answer:  go to Oktoberfest in Germany.  I’m 2 years from 40, but no one’s ever accused me of being patient.  So, we went.

The day of our flight, my bride emailed me this picture from ingur, including a “what I imagine you’re doing right now” caption: 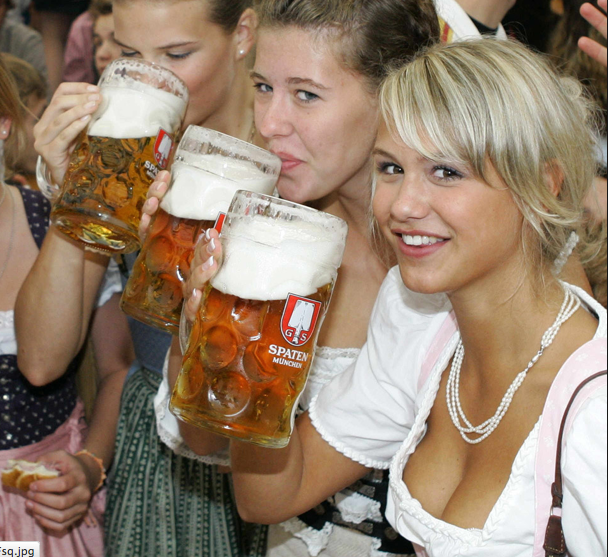 This did create a bit of anticipation.  For the beer.  The enormous glasses.  Of beer.

After our day and night in Amsterdam, we slept 2 hours and boarded a plane for Munich at 8am.  We checked into the hotel.  Chris slept.  Mike and I went tracht (i.e., lederhosen) shopping.  Among the clothing stores, restaurants, and souvenir shops in the plaza, we saw this: 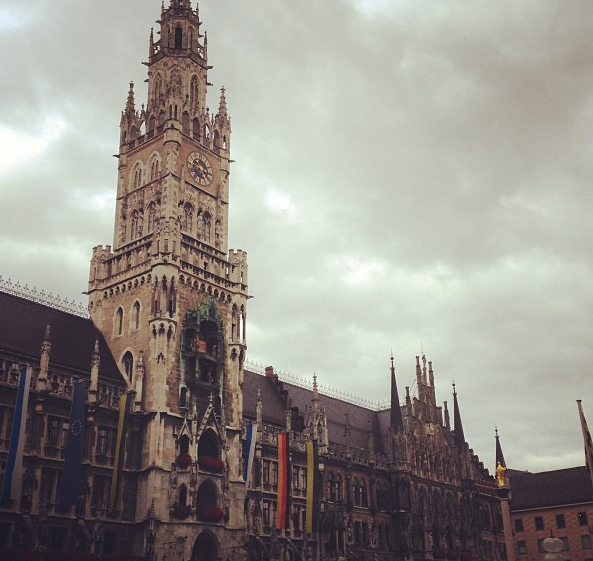 After 4 stores and several beers at Augustiner StraBenausschank, we found our garb.  And a horse. 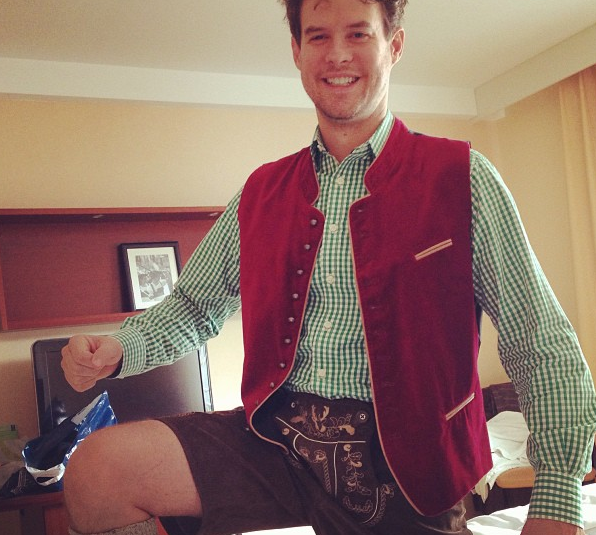 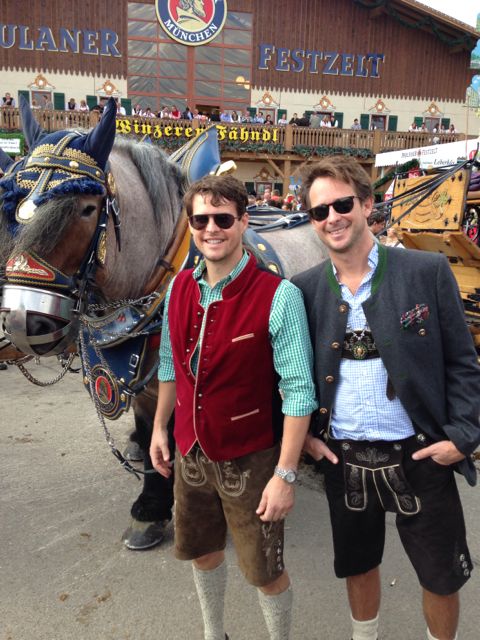 We ate at the Augustiner-Keller outdoor beer garden and enjoyed the Oktoberfest Eve revelry. 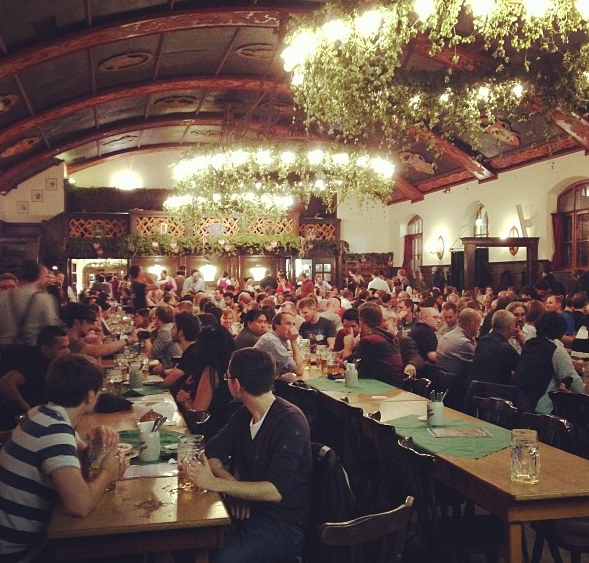 And had beer from an enormous wooden barrel, just like God intended. 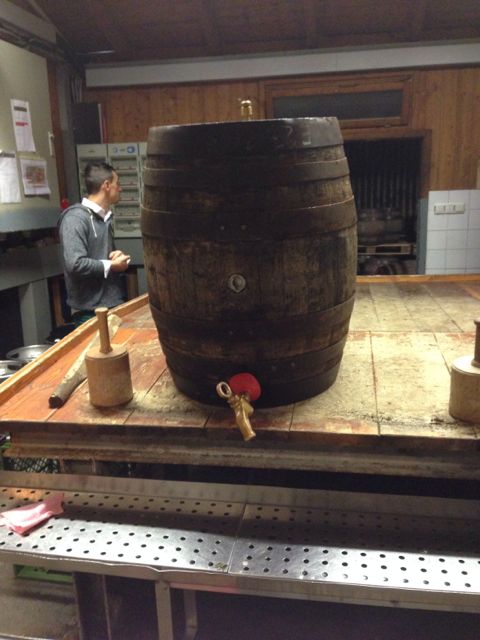 Then, we stepped into a bar for cocktails and talked to a local bartender who recommended a sassy bar called Pacha; we arrived at 12:40am.  There were scantily-clad twins dancing on a bar.  And a DJ. 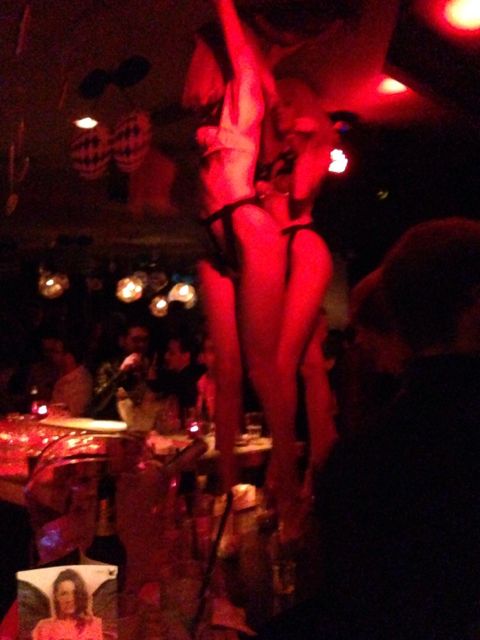 Someone gave me a bunch of Red Bulls with Vodka, which I read somewhere should not follow beers, but there they were.  At some point, we went to the hotel to sleep, as the next day was important.  It was the start of Oktoberfest 2013.

The atmosphere was like an enormous carnival.  Families were everywhere enjoying the rides and attractions.  No wonder 7 million people participate! 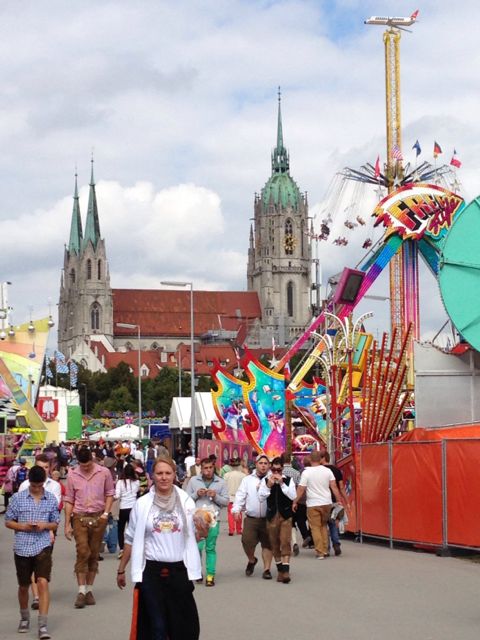 We donned our tracht and joined the festivities. 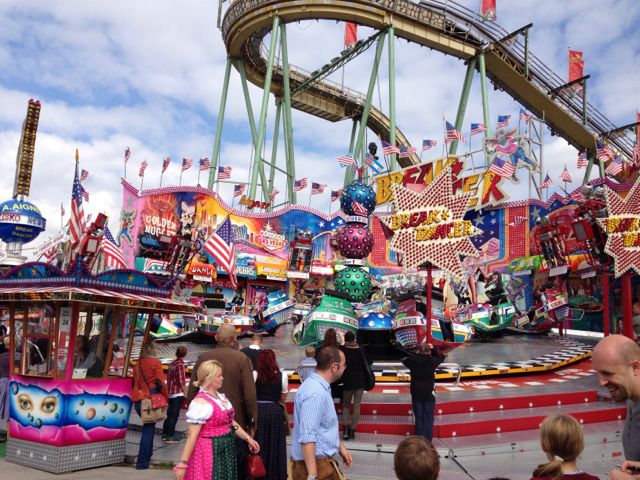 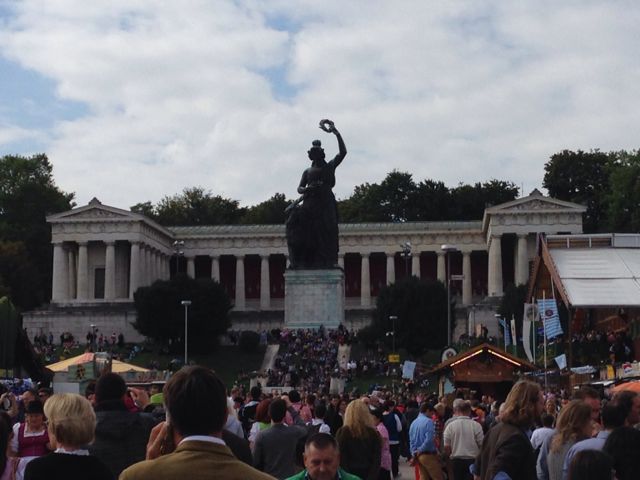 After several hours of wandering about with no beers (but enjoying the happy enormity of it all), it was time to meet the woman with the sunflower in her hand behind the Hofbrau tent.  You see, getting reservations for a tent on opening day of Oktoberfest requires prearrangement several months in advance.  Or, you can drop like $1500 with a scalping service and look for the sunflower and utter an odd arrangement of passwords.  We had to do the latter.

The “tents” are giant buildings that host a level of bliss I’ve not seen even on Bourbon Street. 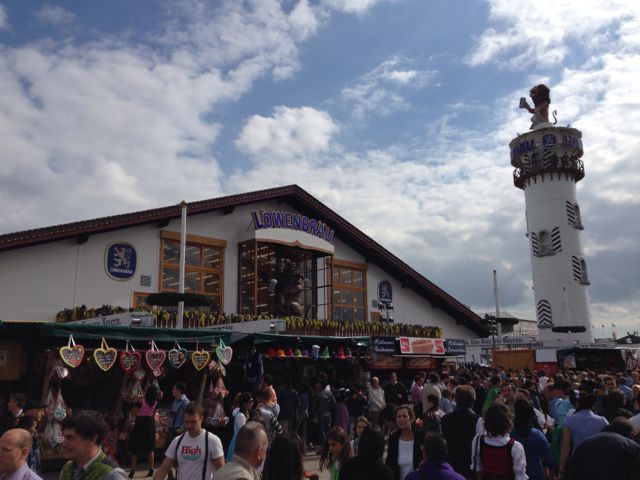 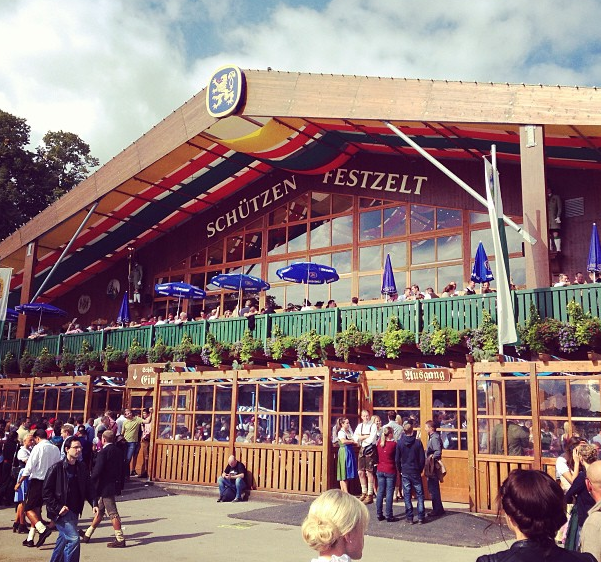 We found our mark, followed her to the door, quietly waited in line, and marched by the angry-looking German guards who examined our passes.  A long flight, immeasurable anticipation, and a shit ton of cash hung in the balance…and then we were ushered up to our table and benches in the balcony.  I was ecstatic. 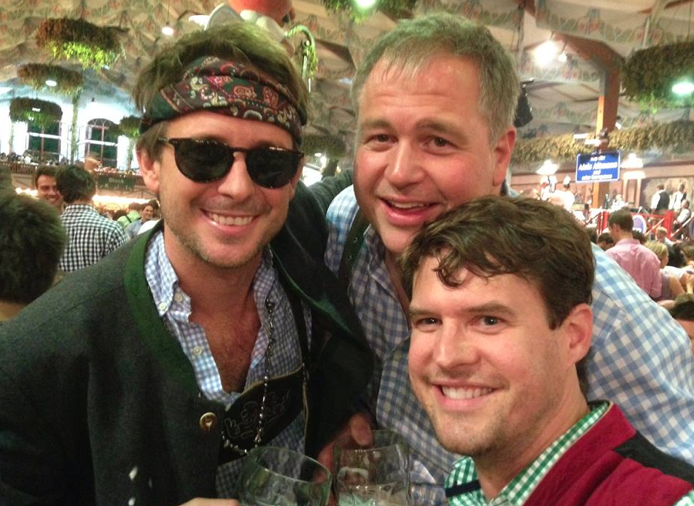 A few minutes later, our wench brought a handful of liter glasses of tasty tasty beers.  And they were wonderful. 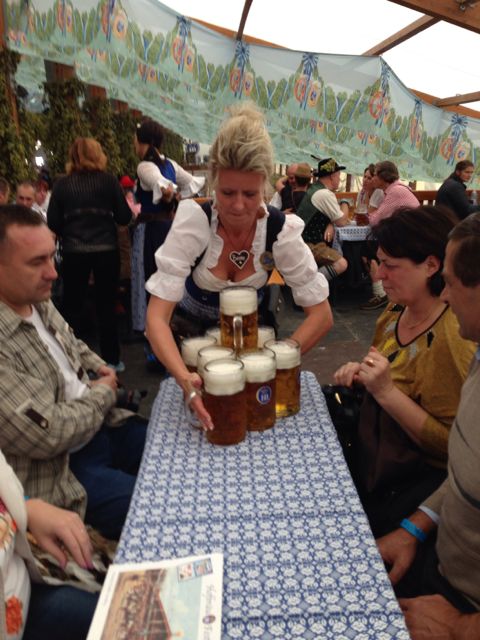 The angry looking dude at the end of the table was a Siberian guy.  I asked him if he was pulling for Ivan Drago against Rocky Balboa, and he looked at me as if he didn’t understand English, but I knew he was just messing with me, because everyone knows English is the international language of everything.

As fun-loving as the Siberian and his wife were, we felt drawn to go downstairs to the tables on the floor, where the younger folks were, just below the band. 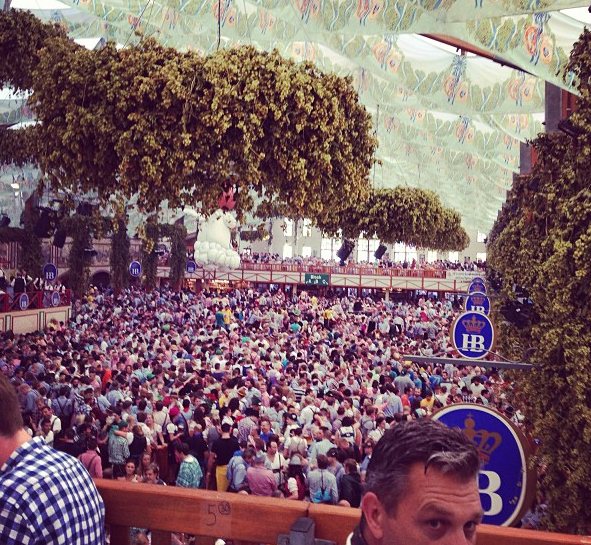 So down we went.  And met nice folks from New Zealand, and Australia, and England, and even the States! 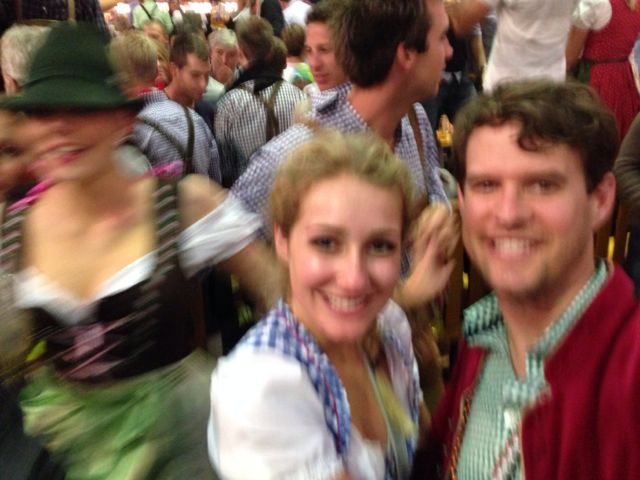 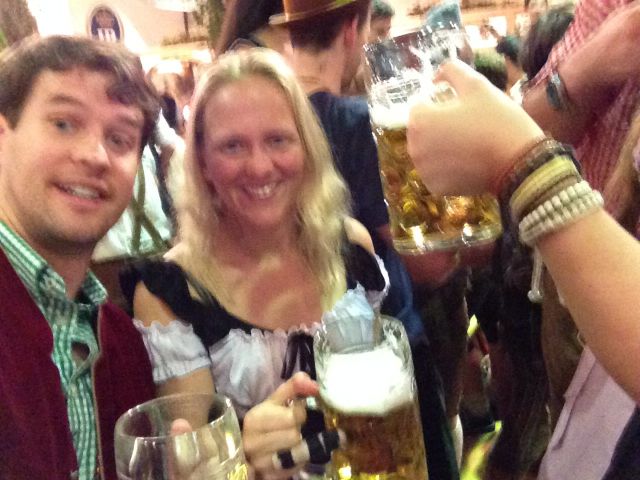 On two ocassions, I was a bit too enthusiastic with a declaration of “Prost!” and shattered barely consumed glasses of beer.  Oops.

Then the band started playing songs I knew (like Sweet Home Alabama), and the Vining and InstaGram videoing began.  But how can I not record a few thousand drunks from all over the globe singing “We Are the World“?  Exactly.

I think we were shoved out around 11pm, so we wandered the city until coming upon an Italian restaurant we’d stopped by earlier in the day for a picture, but now there was music and dancing inside! 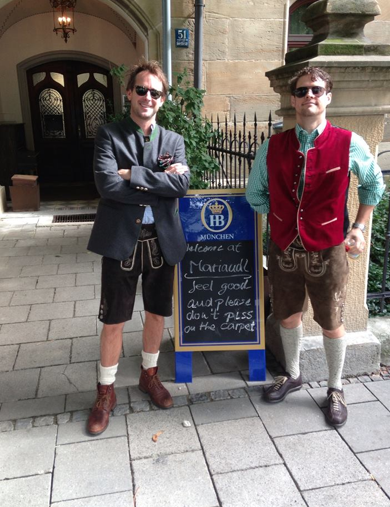 We entered, and we met a nice group of Dutch travelers. 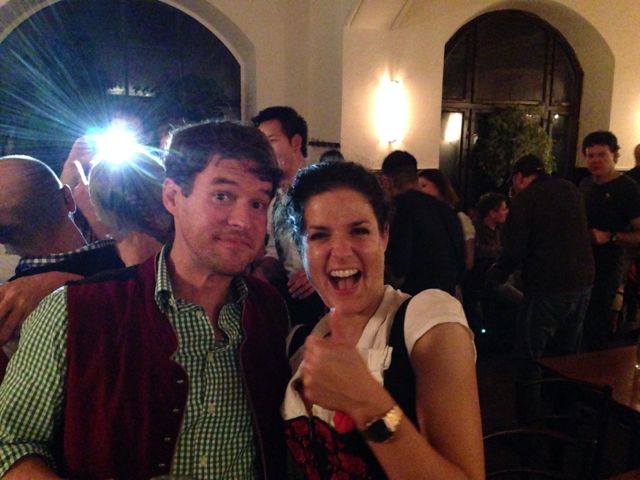 I somehow came home with a liter glass from this establishment, but I did manage NOT to piss on the carpet.

At 4am, we made it back to the hotel, so that we’d have 3 hours to sleep, pack, and be in a cab for the airport home.  A 10 hour flight later, and I was back home and leaving this catalog on my bride’s side of the bed, in case she gets inspired to buy, or make, a dirndl.  Here’s hoping she does. 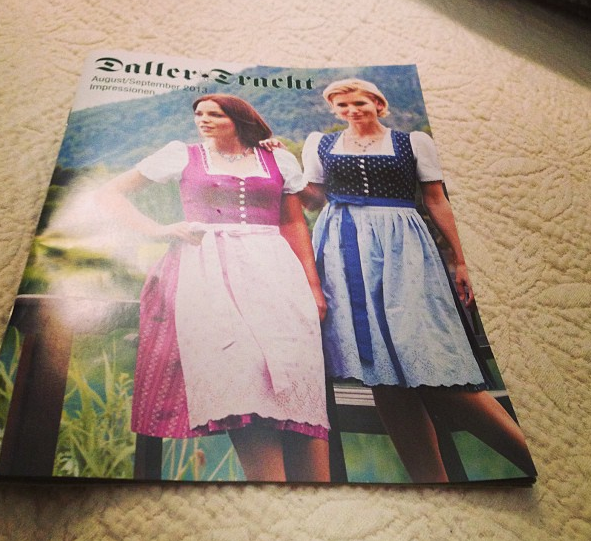 So, would I recommend a trip to Munich for Oktoberfest to friends and family?  Absolutely.  It was one of the best travel experiences of my life.  I loved it.  Only at San Fermin in Pamplona have I been around that many happy-go-lucky, friendly drunk people where there’s no violence (keep in mind that someone was shot a block from me last year at Mardi Gras).  I might have to go back for my actual 40th birth year.  And you know what?  So should you (even if you’re already 40…or nowhere near 40).