“Nobody goes to bed in Madrid until they have killed the night.” — Ernest Hemingway
“That shit is true of Barcelona and Pamplona, too, Holmes.” — The Muskrat

We arrived in Barcelona in the morning and, at the advice of Dave from Blogography, stayed at the Hotel 1898 on La Rambla.  It was excellent.  As in, “had a bidet in the bathroom and a rooftop pool + bar” excellent. 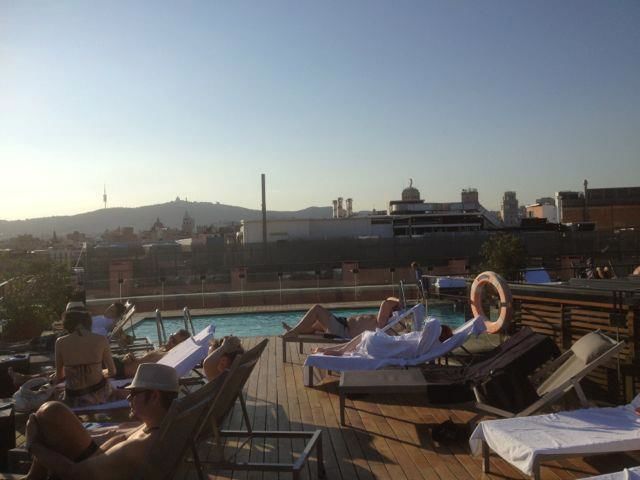 Beers were ordered, and relaxation commenced.  Then, a bit of touring, a visit to the beach, and some dinner. 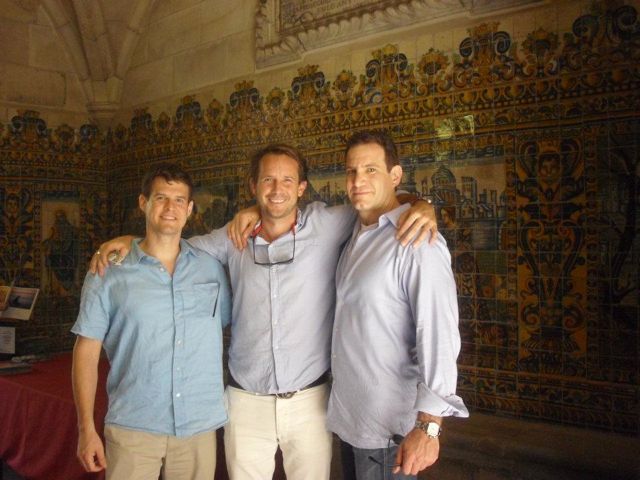 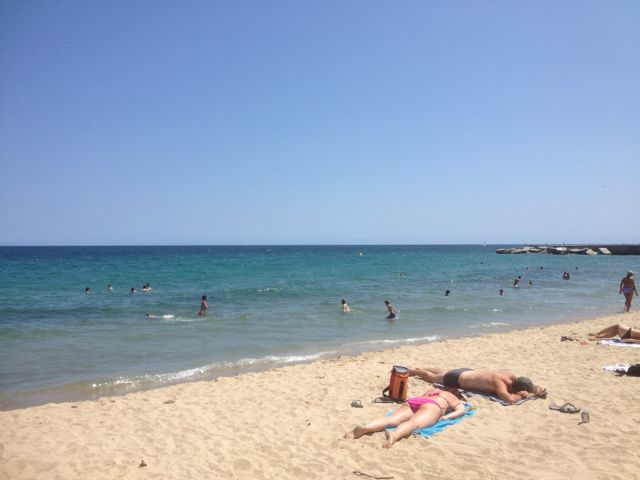 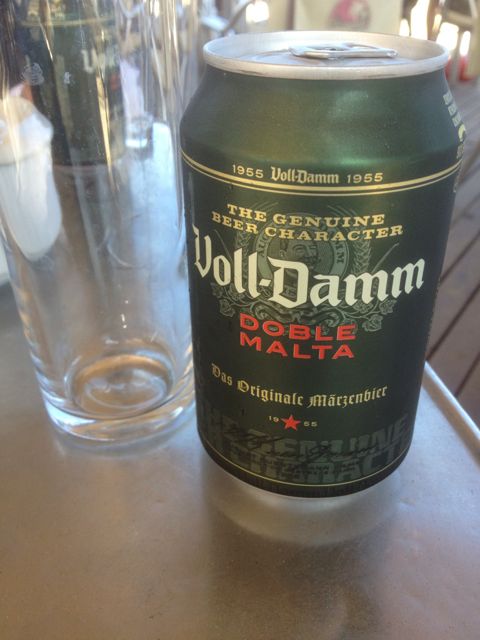 I believe a bartender at dinner told us if we wanted to come strong that night, we needed to go out to a club called Opium.  We dropped a few hundred Euros on “bottle service,” which, I learned, meant an overpriced bottle of vodka to share and some seats around a table in a desirable spot.  We were told this was the only way to sit. 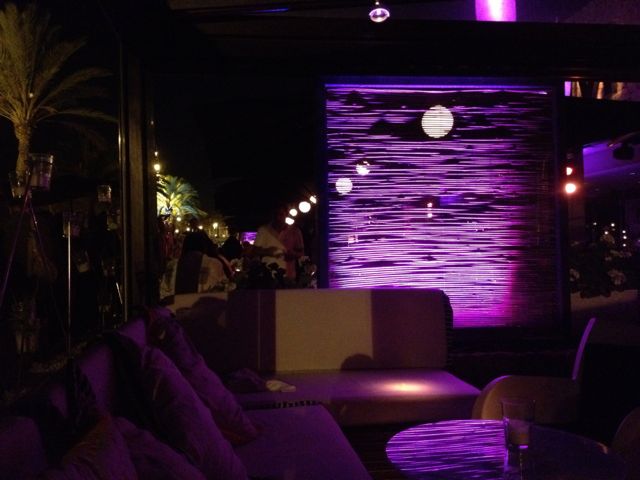 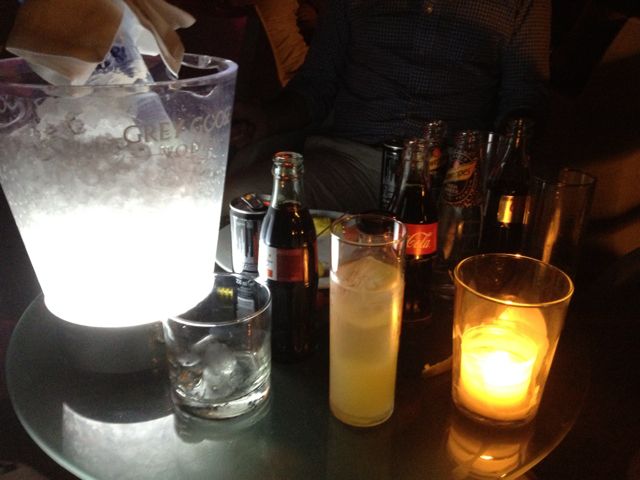 Turns out, this is also how the going out crowd attracts the women folk, because a bunch of Russian ballerinas visited, as did some Londoners, and even some Parisians.  Groups would sit and drink with us for a couple hours and then go dance, only to be replaced by another group.  Around 6 in the a.m., the sun began to rise over the sea, and I decided a trip into the Mediterranean was in order.  There is nothing quite like being in a foreign country in your underbritches at dawn.  The night had been killed.  Day 1 was complete.

After a nap, we boarded a train for Pamplona and checked into the Maisonnave Hotel, which was a mere couple of blocks from the location of the famed running of the bulls.  The city was already packed with folks present for the San Fermin festival, one of the largest parties in the world. 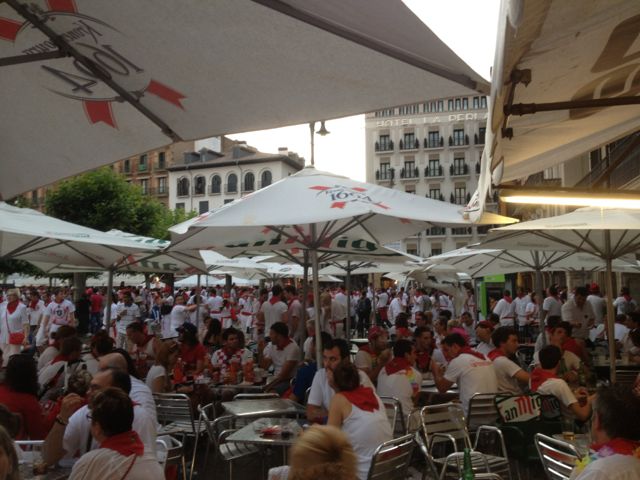 It was Saturday.  We explored the city, took in the food and the drink, and went to bed at a relatively early hour, around 11pm.  We did not kill the night on Day 2.  But, we had an important task ahead of us. 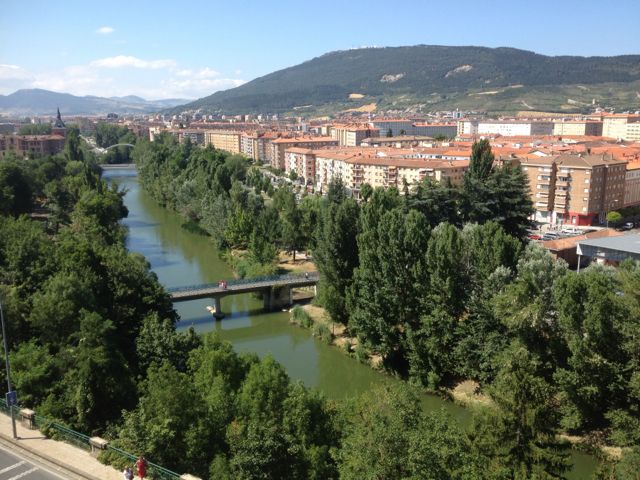 The next morning about 6am, we rose, dressed in the required garb, and climbed into the penned 800 meter course to run with the bulls of Pamplona.  You can read about it here.

There is no feeling quite like the one gained from narrowly escaping death, but euphoria closely describes it.  Here we are immediately after arriving into the arena at the end of our run (accompanied by Jen from Australia): 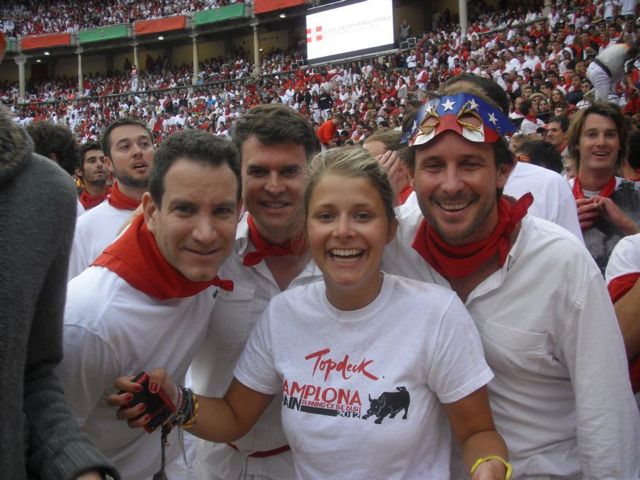 Around 8am, I had a beer.  Shortly after, we discovered Don Simon sangria in large plastic, easily transportable bottles.  Mr Simon kept us going for 23 hours. 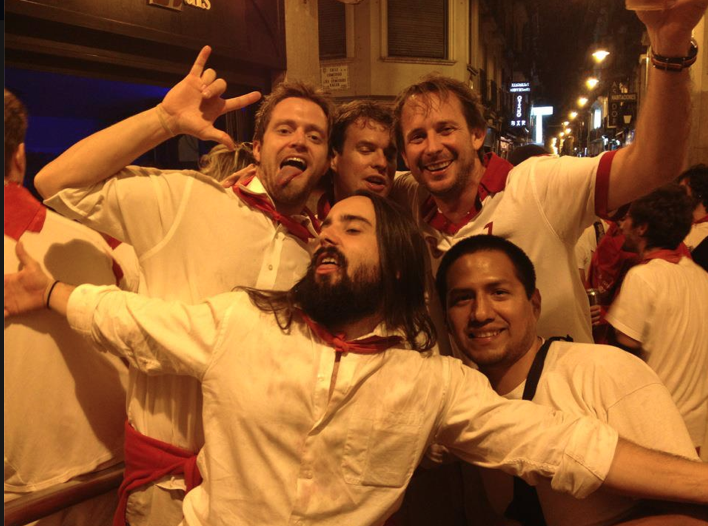 But before afternoon turned into evening, I remembered that when I was a little kid, my dad was in Spain with the Air Force, and he said he went to a bull fight.  He made it sound like it was the thing to do if ever in Spain, and I was in Spain, so I asked our concierge if there were any tickets to the bull fight, and they happened to have 3 that we got for face value (60 Euro), but they were GREAT seats, and on the train ride back to Barcelona the next day, the incredulous passengers sitting across the aisle from us said those seats were likely worth 1000 Euros each.  We walked back into the very arena we’d sprinted toward that morning to watch the very bulls that chased us valiantly fight the matadors who would artfully dance with them until the town official in the black top hat determined if the bull had performed nobly enough to live by giving each a “thumbs up” or “thumbs down” like Joaquin Phoenix did in “Gladiator.” 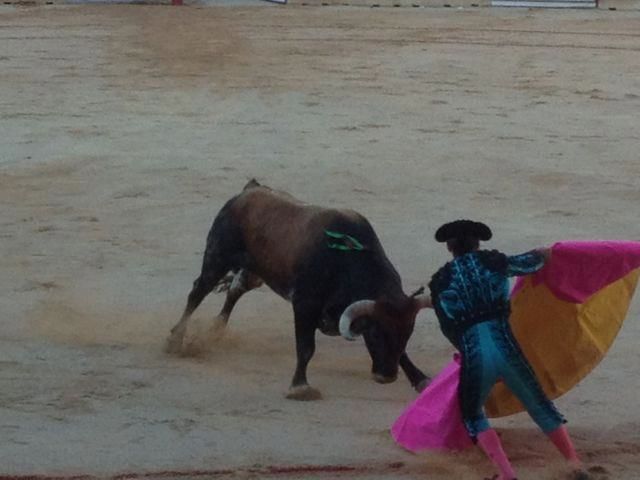 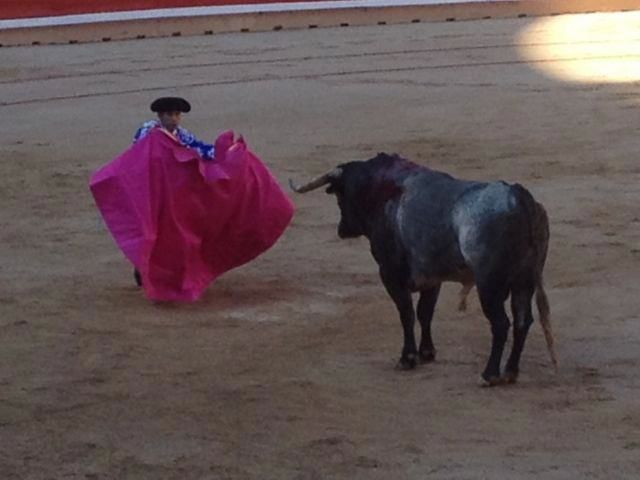 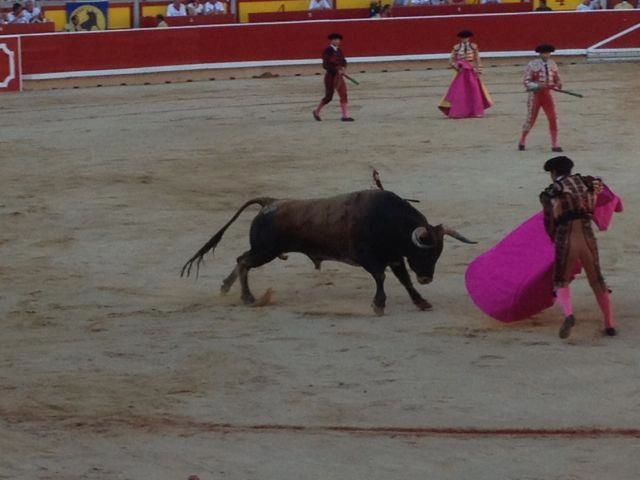 Only there was no upward pointing thumb.  Each bull was sliced with swords until its blood gurgled out of the top of its back, saturated the fur along its sides, and gushed onto the dirt below.  It got weaker and weaker, until the matador shoved a final sword into the top of its neck, and then it fell to the dirt to be roped and dragged out by horses to God knows where. 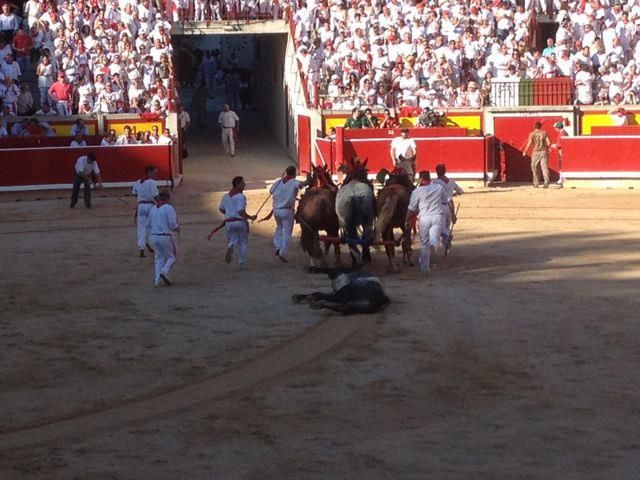 This wasn’t art or sport.  I found myself rooting for the bulls.

With each fight, I regretted choosing to engage in this activity more and more, and by the end of the event, I was in tears.  Keep in mind that I’d been drinking since 8am, which probably put me at a solid 9 hours, and my friends were down the row from me, so I was alone, and I’d run with the 6 fighting bulls that very morning and felt an odd sense of kindredness with them (if there is such a word or concept), but there it is nonetheless.  “This is what makes people join PETA,” I thought.  Any feelings I might have had of regret over choosing law school over bull fighting school were erased forever.

The 3 of us felt the best way to eradicate somber thoughts was by rendezvousing with Mr Don Simon again.  And, some crazy bastards from Texas. 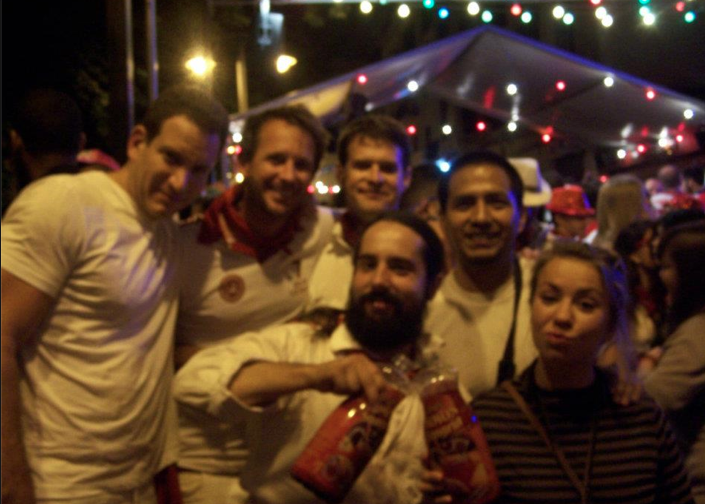 This is what 4am looks like in Pamplona during San Fermin: 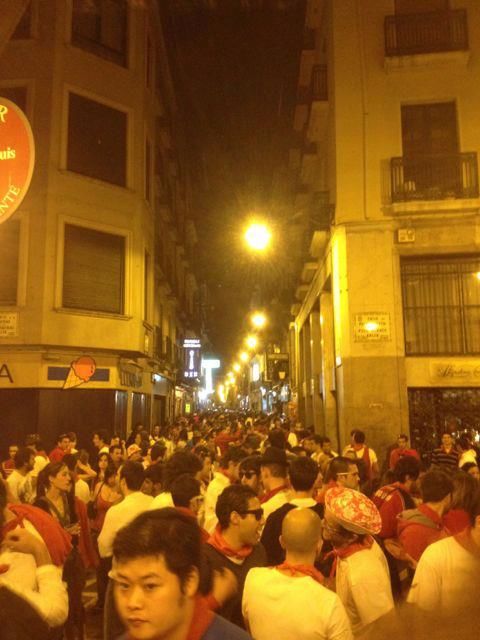 At about 630am, the crowds of runners gathered for the next day’s running with the bulls.  Charles, the bearded Texan, declared that he was running again, despite the 23 hours of solid drinking since his last run.  He invited us to join him.  I was in.  Luckily, Chris talked me out of it.  We went to bed at 7am as the sun rose.  We had again killed the night on Day 3.

A few hours later, we took the train back to Barcelona and returned to Hotel 1898.  Chris slept.  Mike and I decided to explore.  We saw an enormous line to see La Sagrada Família but found a fellow Atlantan and got in line with her, meaning no wait whatsoever.  It was beautiful. 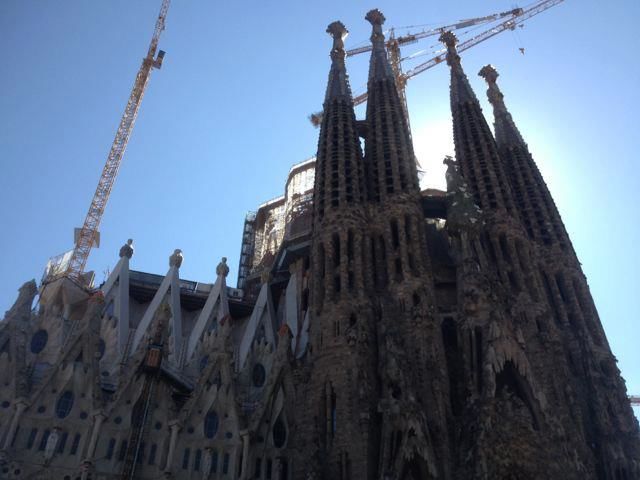 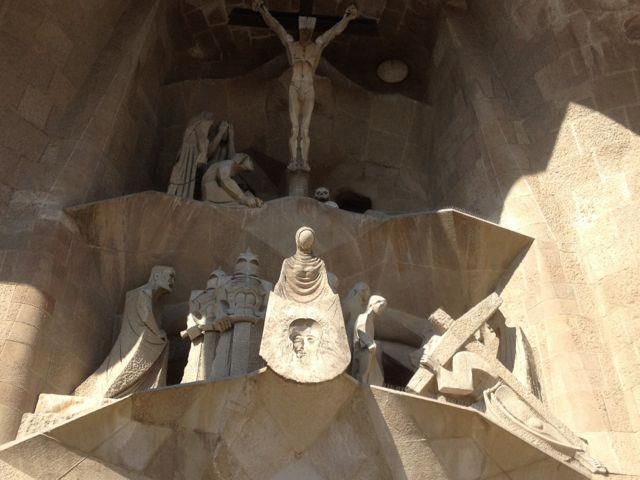 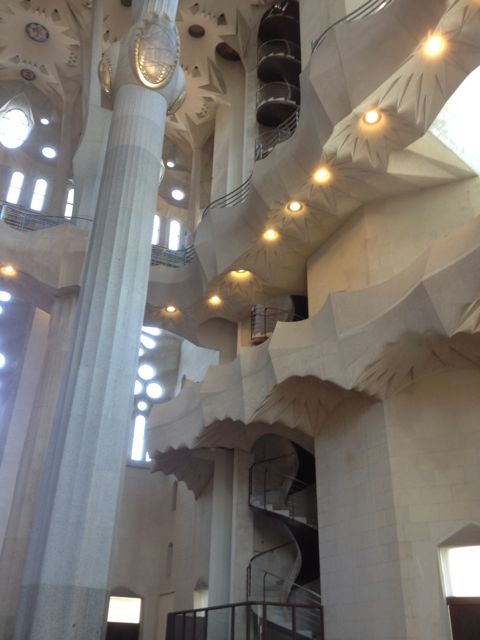 We walked to Casa Batlló, another of Antoni Gaudí’s creations. 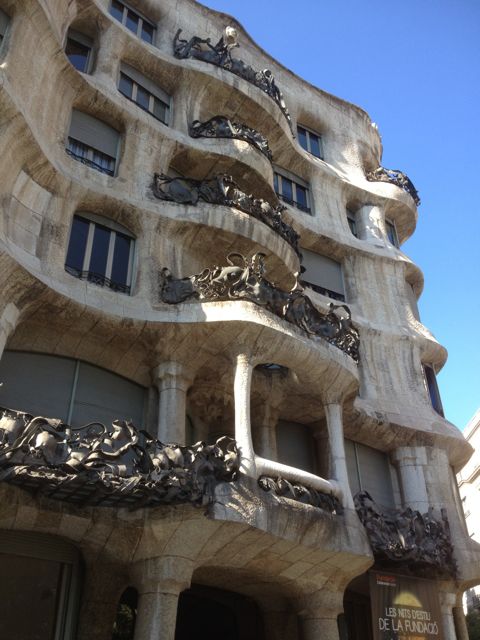 At this point, Chris got up, and the 3 of us had dinner.  Mike nearly died, which would have been tragically ironic, given that we’d just run from 12 bulls the previous day and lived through it, because he didn’t bring his EpiPen to dinner, and the server didn’t understand the dire need to keep him away from shellfish or nuts, so he had to jump in a cab and rush back to the hotel while unable to breathe in the middle of tapas.  He lived.

We went to bed at a reasonable hour but were awakened at 3am to learn that our flight had been cancelled and we’d have to go to Amsterdam to try and make it home via standby instead.  We made it home many hours later.

As for my review of Spain?  It gets a solid 4.5/5 stars.  And San Fermin?  A solid 5.  I thought it’d be a few hundred thousand young males seeking thrills and debauchery, but it was much more than that.  It was mass happiness.  No one was fighting or pushing or shoving like I see each year at Mardi Gras.  A few thousand run with the bulls, while hundreds of thousands come to the festival to watch the parades, dance to the music, and enjoy the party.  Would I go back?  Absolutely.  And so should you.