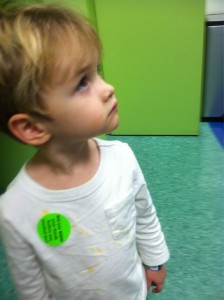 Once or twice a year, my Pretty Bride leaves for several days, and this year’s such trip is this week.  Because I had my military drill weekend last weekend, and because we had a party to attend Saturday night before she flew away (and because the Alabama-Florida game was on at the party), we never really went over such trivial matters as what time the children are supposed to arrive at (or leave) their schools, what they eat for lunch, where their pediatrician is located (or his name), etc. Instead, she took a cab to the airport Sunday afternoon while I served our country from several miles away.  Here’s how it’s gone so far:

0530:  awake to screaming children.  stagger into kitchen; they follow.  ask what they like to eat; am told “oatmeal.”  pull out can; follow directions; hand 3 bowls to 3 hungry children; receive groans and malcontent over consistency and general suckitude of breakfast.  learn a few hours later via text message that i should have used milk instead of water, and that it requires more time in the microwave than i’d allowed.

0820:  leave for school.  maddie’s in a ballerina skirt.  owen is in a t-shirt his sister used to wear, but it’s concealed with a jacket.  follow the five-year-old’s lead to figure out to which class each child goes.  right before dropping off maddie (and after owen is inside his locked classroom), i learn one of their classmates has a peanut allergy, and i should NOT have made PB&J sandwiches for owen.  i imagine what it feels like to have a dead kid on my conscience for a few seconds but tear off to my office anyway while crossing my fingers.

1500:  get pulled out of a deposition because owen’s teacher is on the phone with my paralegal and wants to know if the 65-year-old lady who claims to be my mother is allowed to leave with my children.  am scolded for not putting her on “the list.”  this is the same lady whom i emailed about being a sex offender on accident.

0545:  attempt to make oatmeal for 3 screaming children again, but this time, despite using milk, still incur wrath of the discontented over its watery consistency.  suffer through cries of “we want mommy to come back!” for the next hour.  put owen in his sister’s clothes just to piss him off.  intentionally forget his cover up this time.  allow maddie to wear her shoes on the wrong feet and to color her hair red via some spray crap her big sister left too close to the edge of the counter.

0800:  cram two screaming children into the back seat while reminding them they can’t bring toys or food into daddy’s brand new company car.  they promise not to make messes if i let them treat daddy’s car like they do mommy’s.  feign temporary hearing loss.

1030:  owen’s teacher is calling me again, because he’s shoved a bean up his nose, and they can’t get it out.  i ask if we can just “ride it out” and let it work its way out on its own.  get told “no–it’ll get infected!” in a tone that could be construed as condescending, or at best, preachy.  realize i don’t know who our children’s doctor is.  learn my bride has written our doctor’s name down for the school, so the school tells me, but i call his office and learn they can’t help him. 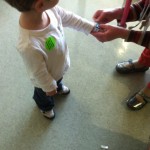 1115:  take boy to emergency room at childrens healthcare of atlanta.  tell 2 intake women in lobby what happened; owen gets a wristband; i sit down to work a bit.

1130:  get sent to patient room with “cinderella” playing on the tv.  tell 2 more women what happened to owen, reading directly from the school’s “incident report” each time so that i get the correct nostril and member of the legume family.

1135:  start eating from owen’s lunchbox, even though we were told by 2 different nurses he couldn’t eat once we’ve arrived at the hospital, because screw those people who want us to be hungry at a time like this.

1215:  lady i think is a doctor but is really a nurse practitioner walks in and asks which EAR has the NUT in it.  try not to get pissed off.  owen points to his swollen nose. we get verbally reprimanded for eating.

1220:  owen is wrapped in a sheet that acts as a straightjacket while a nurse and i hold him down.  he screams, “i’m all done, daddy! let me down, daddy!” while crying at the plastic hooked toothpick-looking contraption that spins, scrapes, and grabs inside his right nostril.  no dice.

1225:  syringe is inserted into owen’s right nasal cavity, and a chickpea i’m certain says “titleist” on it is sucked out. we unwrap him and tell him he’s finished.  nurse practitioner offers to let us keep the foreign object as a ‘souvenir.”  i decline.

1227:  get paperwork telling us to follow up with his pediatrician.  i tell owen to go ahead and open his lunchbox back up, because i’m needing half his cheese stick in a big way.

1300:  drop owen off at our house for his requested “alone time with thomas the tank engine trains.”  pour a drink before returning to work.