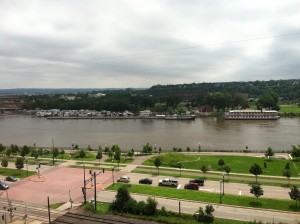 I signed up for a conference in St Paul, Minnesota, because I needed to perform some more active duty before the end of the fiscal year, and Minnesota is one of five states I hadn’t visited yet.  So, now I’m down to four (VT, NH, CT, and RI).

After the first day, I walked to a restaurant a couple blocks away for dinner.  The plan was to have a glass of wine and some tacos, but I got to talking to the bartender and her friend, and then trivia night started, and then another bartender came by and sat down with us, followed by someone who was celebrating her birthday, and before long it was a PAR-TAY, and I’d missed my two-hour “social hour” with the conference attendees, along with any semblance of restraint and good intentions I may have taken with me into Senor Wong’s.

One of these two had a birthday.  I just can’t recall which one or what birthday it was. 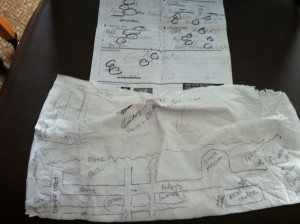 A map!  That leads from my hotel to where Journey, Night Ranger, and Foreigner are playing tonight!  And also?  My trivia score card, which earned me 2nd place and a gift card I’ll never use.

At some point after placing at trivia, these appeared.  Again and again. 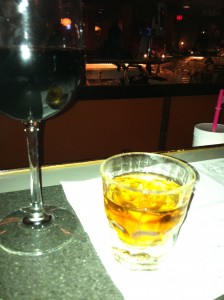 Then we all went outside for Kevin the bartender to have a cigarette, and everyone else was having cigarettes, and since there were no buildings that everyone was jumping off, I decided to have a cigarette, too.  And then we disbanded, and I found my way back to the hotel around 1am and turned OFF my alarm, because AIN’T NO WAY I’m getting up at 0530.

Only I did get up at 0530 and several times after that, as I filled trash cans, the toilet, and the bathroom floor with everything that had entered my stomach the night before.  Once the dizziness came from dehydration and glass after glass of water stayed “down” maybe 30 – 60 seconds each, the realization that I was either going to die or have to go to the nearest hospital for intravenous nourishment hit me, which sucked, because I hate needles worse than I hate split infinitives and misplaced apostrophes.  This continued until noon when the shaking began, and I was sure that I saw Elvis.  He’s back to being thin and handsome, incidentally.

I crawled into the bath tub and turned on hot water to stop the shaking; I knew if I stood up, I’d pass out or vomit some more, so this seemed like the best alternative to lying on the bathroom tile another 6 hours.

It helped!  I was able to slowly stand up and shower.  I found a $1 bill, crawled down the hallway past my two trashcans full of vomit and entered the vending/ice machine room in desperate hope of finding a Sprite.  I instead got a Dr. Pepper.  I was able to stand.  The Dr. Pepper didn’t come back up.  At this point, I decided 1)  I was not going to attend my conference this day and that 2) I have a problem if I can’t stop doing something that I don’t want to keep doing, and it pissed me off.

A friend sent a DM about a harsh something I’d typed the night before; we conversed for a spell; I admitted not remembering what I typed or did the night before very well, and she said something about worrying about me, and she mentioned a nasty word that sounds like “affliction” but has more d’s in it.  I argued with her.

I put on sunglasses and sneaked out of the convention center and into the street.  It was overcast outside and breezy.  The sun restored my ability to be remain vertical but did nothing for the lingering self-loathing.  I needed a green tea smoothie for that.

And then a friend who built a house next to where we built a house in 2007 came by to spend a few hours with me before flying to Ethiopia to pick up a boy he’s going to adopt, and he asked, “What’s new with you?” and I said, “I have a ticket to Journey!” and I could tell he was impressed.

After he left to pack for Africa, I walked back over to Senor Wong’s, because I didn’t recall paying my tab, and I felt awful about it, but they said they didn’t have a record of my not paying, and even though I insisted I had not, because I keep receipts when I eat out while traveling and had no receipts, he said not to worry about it and offered me a beer and a BINGO card instead.  And I stayed put at one beer and felt a little bit victorious, despite losing at BINGO.