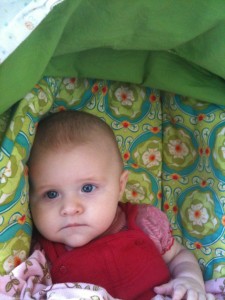 When each of our children was born, as soon as the hospital released the Mrs, I dropped her off at our house and went to work.  The only time I provide exclusive childcare is in the evenings while they’re sleeping and on Sunday afternoons while she mans her store.  Any time Pretty Bride has to go out of town, I have my mother drive over from Alabama (and the infant du jour travels with PB).

But on Thursday of last week, PB needed to fly to Houston for some book signing or demonstrations or something, and said event did not permit children in the area where all the vendors and displays were.  So, I was invited to come and care for Lola.

All week, friends and colleagues who know how I enjoy traveling would say, “So, are you excited about going to Houston?  You get to be Mr Mom!”  No.  I foresaw hours and hours of sitting in a silent hotel room praying the baby would sleep while she wailed at 120 decibels and flung stinky stinky baby turds at me through her rented pack-and-play.

We arrived Thursday night, walked to the luggage carousel to pick up PB’s enormous suitcase full of wardrobe changes, samples, books, and other heavy crap.  It wasn’t there.  Didn’t make the flight.  I can now cross “have an airline lose your luggage” off my “things to NOT do before I die” list.

Had a great dinner at III Forks (after our first choice had a 45-minute wait) and went to bed, praying that our luggage would be there when we returned.

No dice.  But it was at the front desk when we got up.  Hooray for Delta!

Walked over to the convention center so PB could check in and give a class or something.  Just for fun, I tried to push the stroller through the doors of the convention space, and we were promptly blocked from access and told, No Children Allowed.  I now know how Snoopy felt.  And the Five Man Electrical Band.

It was just me and the baby and all of Texas.

Me:  So, I guess it’s just the two of us for the next several hours, huh, BL (abbreviation for “Baby Lola”)?
BL:
Me:  Want to go get a bottle of tequila and try to find a mechanical bull?
BL: 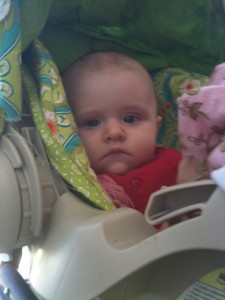 Instead, we walked around Discovery Green park a bunch while I begged her to fall asleep.  When she finally did, I sneaked her back into our room so I could do some work.  No music; no banter with my work wife.  Just a sleeping baby, a dark hotel room, and my gently hitting each letter on the keyboard, trying to avoid waking her. I maintained this charade for 4 hours.

When PB came back, we hit Guadalajara and returned to the room while PB went to a couple invitation-only parties.  It was JUST LIKE BLOGHER!  Only I was the one stuck with the baby instead of attending.  More working.

Saturday began with breakfast with the the Mattocks family at Ziggy‘s. It was good.  And, it allowed me to gather valuable insight into self-publishing the book I outlined 10 months ago so that when I file my travel expenses to the IRS, they’ll see how I was trying to make money.  Right, IRS?  Just ignore this post about providing childcare.

The rest of the day was filled with more walking around Houston and a few hours of naptime spent handling a stockpile of 400+ emails until, for the first time in as long as I can recall, all my inboxes were completely empty.  Until that point in my life, I’d never seen what the little envelope at the bottom of my iphone looked like without a number in the red circle.  It was beautiful.

Just before dinner at The Grove, I got this: 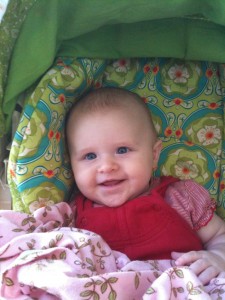 And the tiptoeing and silent keystrokes were worth it.  BL and I were like peas and carrots the rest of the trip, even through a canceled flight home and coming seconds away from missing trick-or-treating last night when we hopped on a small plane full of the first class passengers from our canceled flight plus the three of us that landed two hours later than our anticipated arrival time (but four hours–if not more–before the rest of the canceled flight’s ticket holders’ arrival time).  I’m still not sure why we were chosen to jump on the smaller plane with the first class passengers, but I’ll take it.

And as for BL and me?  As the last infant I’ll hold until my grand kids come, we’re making up for lost time.  And we’re totally planning to find that tequila and mechanical bull.