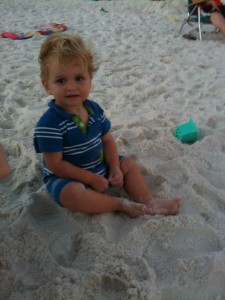 A tax-deductible family vacation seemed like a wonderful idea several months ago when I paid for a conference in Florida scheduled for late July/early August. But every time I’d been to the panhandle, it was March (college spring break) or May (high school senior trip or weddings). And I’d never stayed at a place with a glass elevator lacking air conditioning when it was 100 degrees outside with 80% humidity.  And I forgot that when lawyers go out of town under the guise of continuing legal education, we tend to go out drinking til 2 or 3 every night, making the early wake-ups of preschoolers used to Eastern time absolutely tortuous. It’s a wonder no one got vomited upon.

The 6-hour drives (with one stop to eat) were surprisingly okay, despite the DVD player’s breaking within 3 days of lift off.  I got to talk to Pretty Bride without laptops and workloads in front of us for the first time in … months?  Longer?  The children either slept or made up shitty songs that didn’t rhyme.

Our nearly-3-month-old got sunburned, despite our diligent efforts to prevent it.  Umbrellas tend to blow over in the sand, and bonnets don’t cover entire faces, it appears.  Having a red-faced infant is guilt-inducing to normal people like my kind spouse.  I figure it’s a normal part of childhood.

The positives:  no oil or tar balls in sight; seafood tasted fine (i.e., none of us has died yet); the band at the Village Door let me climb on stage and play the bongos (sort of—I forced my way up there and played until forced back off)!  See how skilled I am? 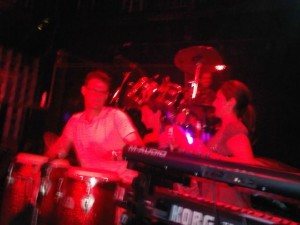 The negatives:  hot as balls; not really a vacation to the continually child-wrangling Pretty Bride, who apparently likes to RELAX at the beach (WTF, selfish woman?).

Proposed changes for next year:
1)  I will help with herding children each morning to the sand by just skipping the conference and only attending social functions at night.
2)  Stay in a beach house, not on the 13th floor of a condo with a hotter-than-shit glass elevator that takes 10 minutes to arrive.
3)  Stay in Santa Rosa Beach or somewhere similar that’s quieter and more quaint, since I won’t care about being able to walk to the conference every morning at the Hilton.  We ate there one of the nights and found it much more desirable.
4)  Consider coming home from the bars at 1 or 2 instead of at 3 or 4.  Notice I use waffling language on this one.
5)  Ask Al Gore or God or someone of equal influence to make the highs in the 80s instead of high 90s/low 100s.

This concludes my second of four nearly consecutive trips.  Next up, New York City and Seattle!  Let the work-related emails continue to mount…